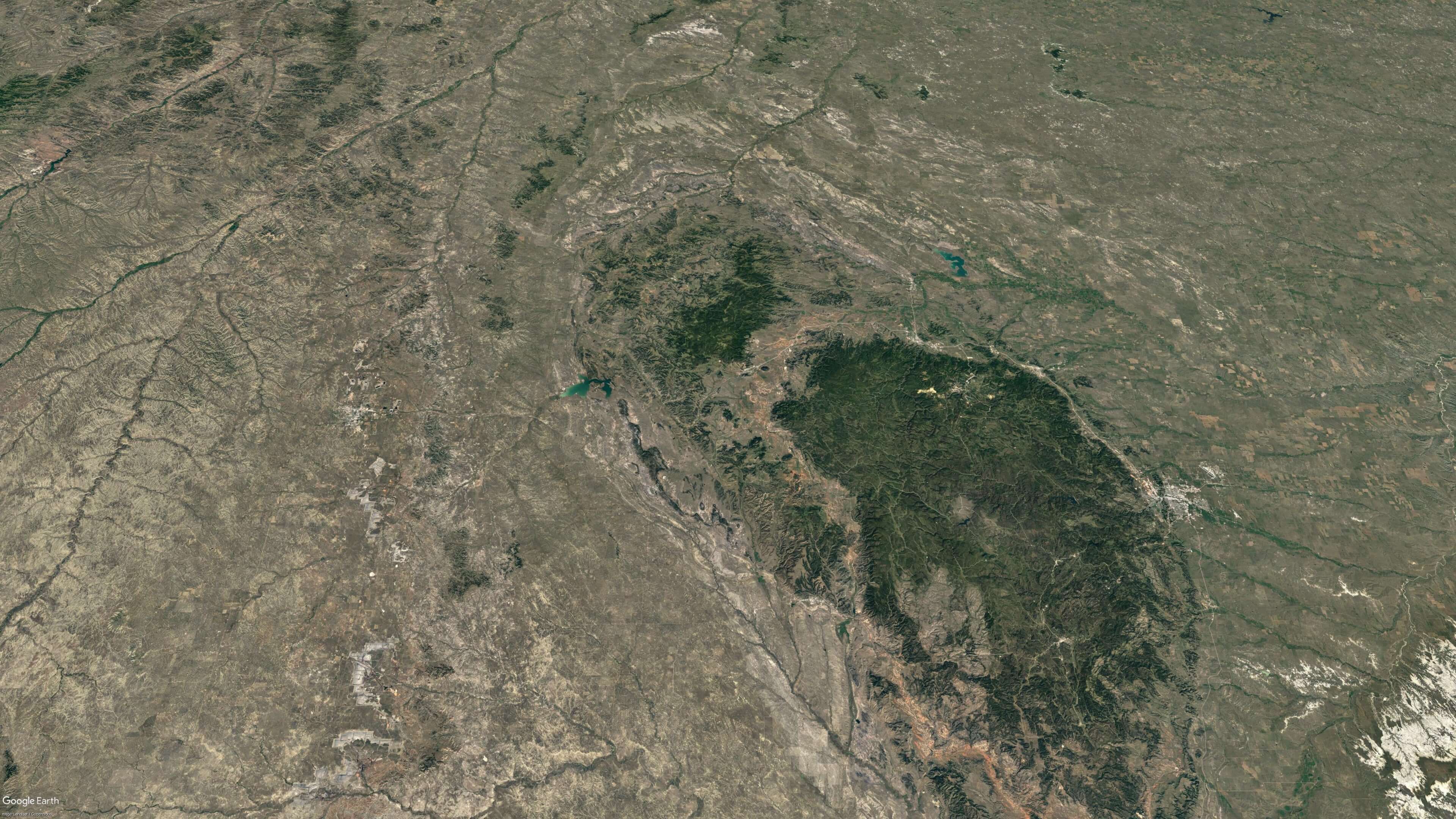 RAPID CITY – With an emergency mining moratorium about to expire, the Pennington County Board of Commissioners received oral remarks Feb. 13, for defending Black Hills treaty land and water against new gold prospecting near the sacred site of Pe’ Sla.

“I’m hoping that the people here and the people who are pushing this project forward highly consider the treaties, the protection of the land, and the cultural aspect that is tied to the Black Hills and Pe’ Sla,” Derrick Kills The Enemy told the commissioners.

“What it means to us is the attack on us, and I’m hoping everyone here considers that it’s not just a few people; there’s little children who you’re affecting,” he said.

The emergency moratorium expires April 5, just as the Canadian firm Mineral Mountain Resources Ltd. begins exercising its recent state permits for exploration and Rapid Creek water usage in prospecting for gold on a 7,500-acre area of claims located between Rochford and the tribal trust land of Pe’ Sla, in Pennington County.

Also known as Reynolds Prairie, or the “Heart of Everything”, Pe’ Sla is a significant site in Lakota spiritual reckoning, considered to be the center of the Black Hills.  Along with the rest of the historic Lakota Territory covering a five-state area, it was stolen from the Great Sioux Nation by violation of the 1868 Ft. Laramie Treaty in the gold rush of the late 1800s.

The Magpie Women’s Council staged a prayer walk to the commission meeting, in which participants carried signs stating: “No Exploration in the Black Hills,” “It only takes 36 minutes for contamination to reach Pactola Reservoir from the Mineral Mountain exploratory drilling site in Rochford along Rapid Creek,” “Save Rapid Creek,” and “Protect the Sacred Black Hills.”

Sheriff’s Department officers met them at the entry to commission chambers and refused to allow the signs into the room. Participants argued that violated their constitutional right to freedom of expression but complied, joining other meeting-goers in a standing-room-only crowd.

The commissioners slated two more opportunities for public comment Feb. 20 and Feb. 23, planning to schedule a third for Feb. 27, in order to vet their draft Ordinance Amendment 17-02, which would change mining permit rules.

They want to have the ordinance in place prior to the emergency moratorium’s end date of April 5. They initially ordained the temporary mining ban on April 5, 2016, in order to launch a sand-and-gravel ordinance revision.

The review, conducted by a committee, responded to appeals from Black Hills landholders and Croell Redi Mix over the company’s attempt to expand a materials quarry called the Perli Pit near Sitting Bull Crystal Cave and Bear Country on Highway 16, between Rapid City and Rockerville.

On Dec. 13, 2017, the state Supreme Court ruled in favor of the commissioners’ decision to deny the expansion permit, as requested by neighbors concerned about property values, water, dust, scenery and tourism income. 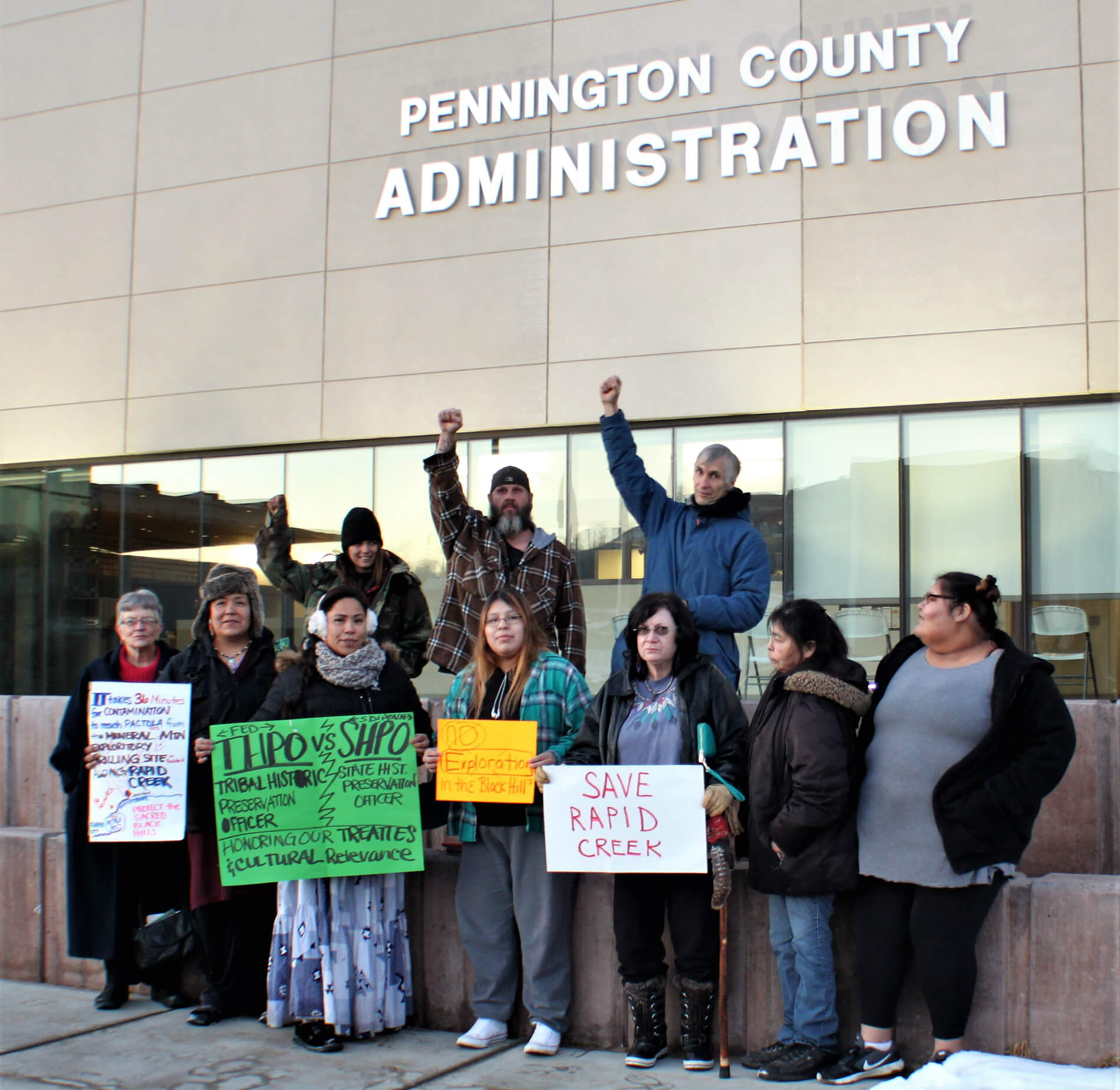 The Magpie Women’s Council staged a prayer walk to the commission meeting. Photo by Talli Nauman

Meanwhile, participants in the ordinance committee included changes in the amendment now up for vote, in order to cover not only construction materials excavation, but also mineral mining on claims for gold, uranium and other resources existing in the county.

During the hearing, commissioners dubbed those changes “stop-gap” measures, because unless the new language is included, the county has no regulations of its own on mineral mining.

In turn, they voted to form another committee on mineral mining and for the Pennington County Planning Department staff to present a structure and format for the committee to them. The commissioners had promised to create the committee during a previous meeting.

Two members of the public advocated for renewal of the emergency moratorium.

Pennington County Assistant State’s Attorney Michaele Hoffman told commissioners the emergency moratorium cannot be extended. Instead, she said, “We are going to be working on a separate ordinance dealing with minerals.”

The state law that the commission used to invoke the emergency moratorium and two past extensions pertains to temporary zoning that can be declared “if a county is conducting or in good faith intends to conduct studies within a reasonable time.”

It dictates: “Any emergency measure is limited to one year from the date it becomes effective and may be renewed for one year. In no case may such a measure be in effect for more than two years.”

Constituents told the commission they want the new committee to have balanced makeup.

Kelsey Parker, legal counsel for the Perli Pit neighbors who appealed Croell’s expansion permit to the commission, said the committee that crafted the ordinance amendment now under consideration “was largely made of people from the mining industry.

“Their interests are strongly shown in the staff report and interests of Pennington County residents are not,” she said.

Sandra Little, who said she has lived in the Black Hills all her life, told commissioners, “The only thing I’m gonna say is that I asked for equal representation on this committee. If you’re gonna have 12 members, six of them should be Lakotas.” 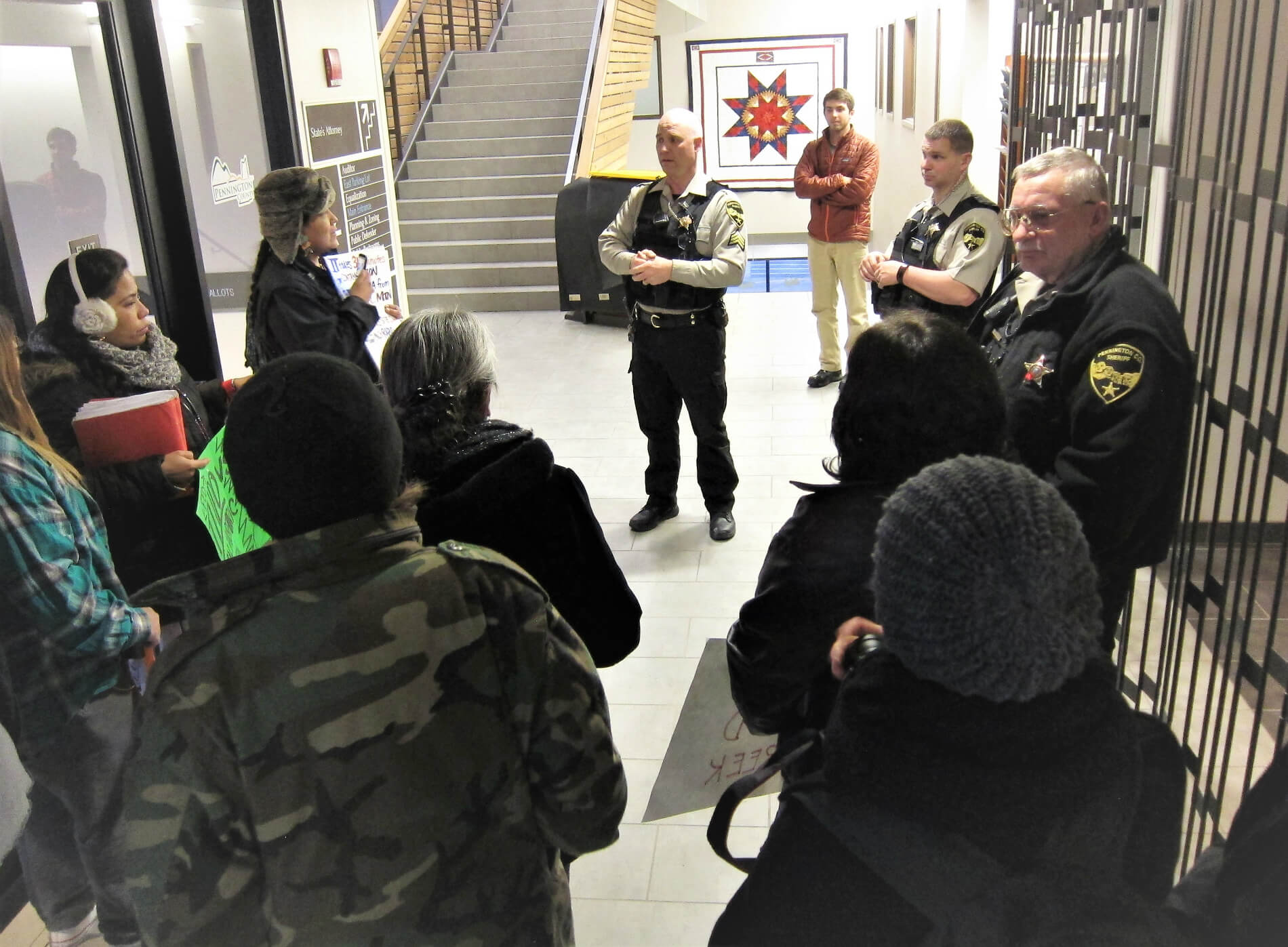 Citing the treaty signers, elders and future generations, she cried about mining projects and said, “It breaks my heart to see what these people are doing to our sacred Black Hills.

“We never sold our Black Hills,” she added. “Pe’ Sla is sacred, and we put buffalo up there now.  If they have to drink that contaminated water, how long are they gonna live?” she asked.

A speaker who said her name in English is Theresa Lange noted she raised her children in Pennington County and her grandchildren live here. “The only comment I have as far as the formation of the committee, again, is what my elder said — that we need equal representation, and not only demographically, racially, economically, but also our young generation,” she told commissioners.

“I think it’s important to remember Standing Rock, and that spark was ignited by five high-school children,” she noted, referring to the nine-month grassroots resistance in 2016 and 2017 of the Great Sioux Nation and allies from around the world to the militarized police enforcement of property lease rights for the Dakota Access oil pipeline construction through unceded treaty territory.

“I would love to see the youth included. This is their future, and I think they have a lot to offer,” she said.

Robin Zephier, who identified himself as a Miniconjou Lakota from Rapid City, said, “Regarding the formation of this committee, I would echo the thought, so it should be inclusive of the diversity of the people that have a spiritual center to this land.”

However, he warned, “When we make important decisions such as forming this committee to deal with gold mining in the sacred He Sapa, you must answer the question at the beginning, not just how to do it but also, ‘Should we do it?’

“In history, my ancestors were a part of the aboriginal presence here in the He Sapa. The gold issue arose in the 1870s and that can never be taken away from the history of my people. But when we talk about gold mining again entering a century and a half later, you must learn from mistakes. Otherwise those mistakes will be repeated.

“In that consequence, we lost so much, and we cannot lose any more. There are sacred sites in this sacred land. In fact, every square inch of this land is sacred.”

Referring to the proximity of Pe’ Sla and the Mineral Mountain Resources Ltd. Rochford Gold Project, he said, “There are sacred sites that exist that are within spitting distance of what this evil enterprise is intending to do.”

Marceline Eagle said she grew up at Red Shirt Table, South Dakota, and “I’ve dealt with uranium mining poisoning my river since I was a little girl, so the fact that this gold thing is going to happen is just another repeat in history.

“But what can you do is help me protect the water that’s left for my children and yours, maybe your grandchildren,” she said. “There are plenty of places that they can dig gold, especially people from Canada. You know, why are they coming here? Just for money.

“Well it’s gonna destroy our people and I’m not consenting. I hope that you get a lot of people who are like me on your committee,” she said.