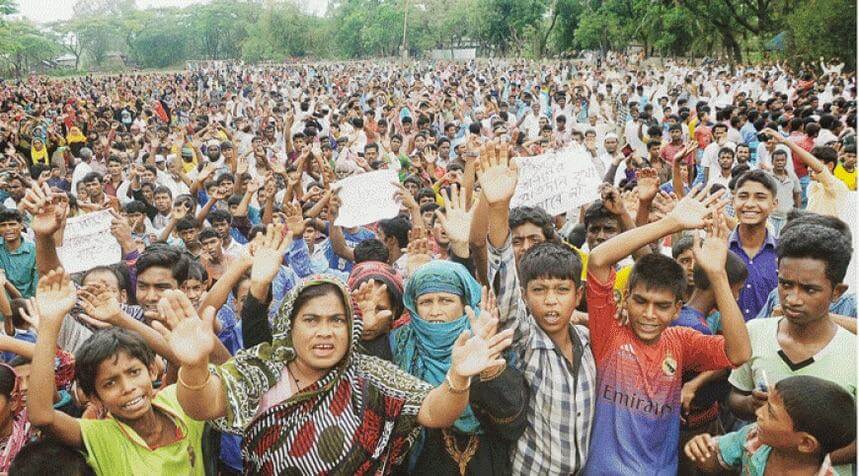 Justice for the Banshkhali People

A global message to the Prime Minister of Bangladesh: Cancel the 1320 MW Coal Plant in Chittagong
Support our journalism. Become a Patron!

We, the advocates for environment, climate and human rights, are deeply shocked to learn about the humanitarian crisis the people of Gandamara Union under Banshkhali Upazilla (sub-district) of Chittagong have currently been experiencing since the 4th of April of this year.

Being the Prime Minister of Bangladesh, we are pretty sure that you are well aware of the current crisis of the coastal people who depend on harvesting salt and shrimp cultivation for survival.

This humanitarian crisis primarily ensued when the local police fired on and the thugs belonging to your party attacked the people protesting against the deceitful, and in many cases, forceful purchase of privately-owned and khas (government owned) lands in the area by S. Alam Company. On that day the Boshot Vita Rokhkha Committe (Committee to Protect Households) organised a protest meeting and on that protest gathering police and local goons attacked and killed four people and left hundreds injured.
.
As you know S. Alam is a private limited company which has been constructing an ecologically harmful two coal-driven power plants in the area with an individual capacity of producing 1320 MW of electricity. The said company initially gave a false impression to the local residents that they would set up textile mill and agricultural industry in the area and promised to create more employment opportunities.

In support of the company, the local land office in their report even confirms that only 150 households are located in the concerned area falling under Gondamara, West Boroghona and East Boroghona Mouzas. However actual number of the households in the area is 47-times more. In Gandamara Union alone, there are one high school, 11 primary schools, six madrasas, and four kindergartens and 45,748 people are living. Accordingly the local land office recommended the local administration to allow the company to buy privately owned land and lease out the khas land (governed owned land). The local land office eventually approved it to buy 3000 acres of land.

Since the protest meeting of April 2016, your government has reportedly become more repressive and violent, though it initially promised to conduct an inquiry into the killing. The local police have now been continuously raiding the area to arrest the local leaders of the Boshot Vita Rokhkha Committee and even sometimes resorting to open fire on the local people. They are not even sparing the domestic animals. In one such incident, the local police, while arresting 70 years old ailing father in absence of his son who has actually mobilised the movement, swooped on the local people and opened fire injuring at least 19 people and one domestic animal. Sadly enough, the consistent crack down and harassment by the local police has now resulted in the disruption of their normal livelihood. They are not even being able to sell their salt in the market which they have harvested.

The recent cyclonic storm called Roanu added further insult to injury as your government and the local administration appear to have gone bizarre to quell the movement in connivance with S. Alam Group of Companies. Because of the constant fear of being arrested, the local people could not go to the cyclone shelter homes on the eve of Roanu. The local police even set up at least eight check posts to arrest them whoever would try to reach the shelter homes for safety. So they forced them to stay back at home even during the cyclone. The devastating storm caused an economic loss of an estimated amount of BDT 100 million to the local people as their salt submerged in the water. To utter dismay and surprise, your government and the local administration have not yet sent any relief in the aftermath of Roanu in this particular area.

We are now convinced that that the state is solely responsible for the humanitarian crisis as it has been in a mission from the beginning to aid the S. Alam Group to construct the coal-driven power plants in the area. It is also evident from the actions of the armed forces and local administration in response to the protest movement.

The controversial coal plants are being built on a forcefully-acquired coastal 600-acre land by the S. Alam Group of Bangladesh which is allegedly a close ally of the ruling party. The company actually signed an agreement with two Chinese corporations: SEPCOIII Electric Power and HTG back in 2013 to construct the plants. Unfortunately, it has not conducted any Environmental Impact Assessment (EIA) which is a legal and obligatory requirement for setting up a power plant.

Given the existing humanitarian crisis at Bashkhali of Chittagong, we cannot remain silent and sit idle. The local people living in the coastal region of the country are already bearing the brunt of climate-induced disasters. Now they are being further pushed into a death trap and poverty because of the planned coal projects.

We, citizens of the world, united in ending the dirty coal regime and beginning a new age of a sustainable and affordable, renewable and clean energy and an alternative development path.

We also stand united in solidarity with the people of Bangladesh and all communities resisting the hazardous and fatal operation of these projects.

We declare and uphold the rights of all peoples of Bangladesh struggling against land-grabbing and state-enforced violence, and support the people who are committed to sustainable environment, clean energy, and the right to assembly and freedom of expression.

We condemn and demand that the government officials immediately cancel the construction and operation of the controversial power plants; form an independent committee to investigate the killing and repression by the local police and the thugs.

We also call upon the S. Alam Group to shun violence and their reliance on the local thugs and gracefully leave the area.

We strongly demand justice for the lost lives in Banshkhali, Chittagong.