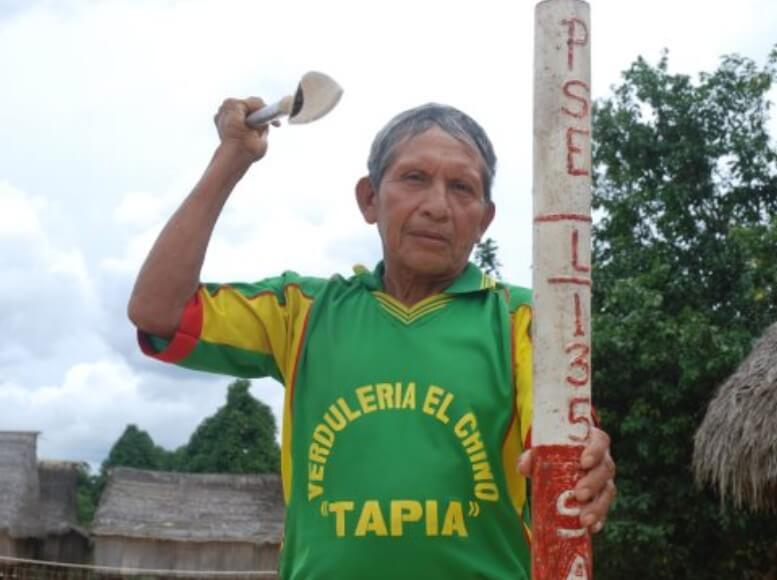 A Matsés leader in the Peruvian Amazon pledges to attack oil workers intruding into the tribe's territory with spears, bows and arrows. Photo: David Hill.
Support our journalism. Become a Patron!

Members of an indigenous people living on both sides of the Brazil-Peru border in the remote Amazon say they are prepared to fight with spears, bows and arrows if companies enter their territories to explore for oil.

The Matsés have publicly opposed operations by Canada-based firm Pacific Rubiales Energy for at least five years, but they say that neither the company nor Perupetro, the government body which granted the licences to two oil concessions in Peru, are taking any notice.

“It seems that the [Peruvian] state is a child”, says Dora Canë from the most remote Matsés village on the Peruvian side of the border, Puerto Alegre. “It doesn’t listen. We say no, but it just carries on. It wants to extinguish us.”

“We have told the company no, but it isn’t listening”, says Nestor Binan Waki, another Puerto Alegre resident. “Our patience is running out. We have nothing more to say. The only thing we have is our spears.”

“They should respect indigenous peoples’ rights, but in my view they’re not doing so”, says Lorenzo Tumi, also from Puerto Alegre. “We’ve been saying no for many years. The only weapon we have is to kill one of them. We could kill one of the company.”

Support promised from over the border in Brazil

The Matsés based in Brazil are equally concerned about the concessions – partly because they consider the Peruvian side of the border their territory too and partly because of the potential impacts on the Brazilian side where they live in the protected Javari Valley Indigenous Territory.

“We don’t want the oil company”, says Waki Mayoruna, the head of the remotest Matsés village, Lobo, in Brazil. “If they don’t listen to us, if they don’t understand our no means no, there’ll be conflict that’ll lead to people being killed. That will always be my position.”

“We’ll always fight against the invasion of our territories”, says José Tumi, from Sao Meireles in Brazil. “If they don’t listen, we could fight like we have done in the past, with bows and arrows. We could attack anyone who invades our territory. We’re not afraid of dying.”

“The government is not listening, not respecting, our decision”, says Juan Bai, another Sao Meireles resident. “One day our patience could run out. We have our limits. If they invade the only thing to do will be this [to fight].”

Many Matsés stress that previous generations were forced to fight against rubber-tappers, loggers, road-builders and soldiers invading their territories, and that they could do the same again now.

“Before contact [in the late 1960s] there was always conflict in this region”, says Romulo Teca from Puerto Alegre in Peru. “It could come to that again. We are the sons of those fighters. We can defend ourselves with arms like they did. I’ll always fight to ensure no oil companies enter.”

“Our fathers had to defend our territories and fought with other tribes, mestizos and soldiers”, Felipe Reyna Regijo, from Remoyacu village in Peru, told a bi-national meeting held by the Matsés last month. “Why don’t we continue that position, given that we are the sons of fighting fathers?”

The bi-national meeting concluded with the “total rejection” by the Matsés of both oil concessions, and the signing of a statement saying the decision was “unanimous” and stressing the social and environmental impacts of oil operations elsewhere in Peru.

Raimundo Mean Mayoruna, from Soles village in Brazil and president of the General Mayoruna Organization (OGM), says that the Matsés don’t want conflict, but it is possible if their rights are not respected.

“We don’t want this, but if there is a lot of anger it could happen”, he says. “My message to the companies is that they respect our decision and understand we’ve lived here for a long time and want to live in peace. We didn’t come from any other place. We’re from here.”

Empty threats? Or are the Matsés for real?

Many of the most aggressive statements were made by Matsés men wielding and thrusting long spears or carrying bows and arrows – leading one man, Rafael Shaba Maya, a teacher in Puerto Alegre, to remark, “It’s true they will fight. When they say something, they do it.”

That opinion is shared by the former president of the Matsés community in Peru, Ángel Uaqui Dunu Maya, who stresses the potential environmental impacts and the Matsés’s past experience of oil operations in the 1970s when “many people died of illnesses” as a result.

“Yes, in my opinion, it’s certain that [this] is going to create a lot of conflict between the Matsés and the state”, he says. “Why? Because the Matsés don’t want hydrocarbon activities in their territories but the state wants to explore.”

Brazilian anthropologist Beatriz de Almeida Matos, who has worked with the Matsés for 10 years, says that “without a doubt” they will do “whatever it takes to defend their territory” from anything threatening their way of life and existence.

“It wasn’t so long ago, in the 1970s and 1980s, there were conflicts between Matsés and non-indigenous people in their territories, with deaths on both sides”, she says. “If they’re not consulted and their decisions not respected, they’ll understand dialogue is over and defend themselves by taking up arms again, rather than using the law.”

The Matsés say they were not consulted by Peru’s government before the two concessions were established in 2007 – as is their right under a legally-binding agreement ratified by Peru in 1994 – but Pacific Rubiales claims this right has only applied since 2012.

According to Peruvian NGO CEDIA, one of the concessions, Lot 137, includes 49% of the Matsés’s titled community land in Peru and 36% of a supposedly ‘protected natural area’ called the Matsés National Reserve, which they consider their territory too.

The other concession, Lot 135, also includes community land, the reserve, and other areas considered Matsés territory, as well as a huge chunk of a proposed reserve for indigenous people living in what Peruvian law and indigenous organizations call ‘isolation’ or ‘voluntary isolation’.

The eastern boundary of Lot 135 and part of Lot 137 is the River Yaquerana – which acts as the Brazil-Peru border and many Matsés from both countries rely on for drinking water, cooking, washing, bathing and fishing.

Together the two concessions cover almost 1.5 million hectares and have been estimated to hold almost one billion barrels of oil. Some exploration has already been done by Pacific Rubiales in Lot 135, starting in late 2012, which involved conducting seismic tests and drilling wells.

Pacific Rubiales says it “fully respects” the Matsés’s position and is therefore not currently “performing any exploration activities” in Lot 135 and Lot 137, but declined to respond to a question from The Ecologist why it still holds the licences to both concessions.

According to Brazilian NGO Instituto Socioambiental, there are almost 3,500 Matsés – 1,700 of whom live on the Peruvian side and almost 1,600 on the Brazilian side, although movement across the borders is common.

David Hill is a freelance journalist and environment writer based in Latin America, writing for the Guardian, The Ecologist and other publications. For more details see his website: www.hilldavid.com or follow him on Twitter: @DavidHillTweets

Article originally published at The Ecologist.