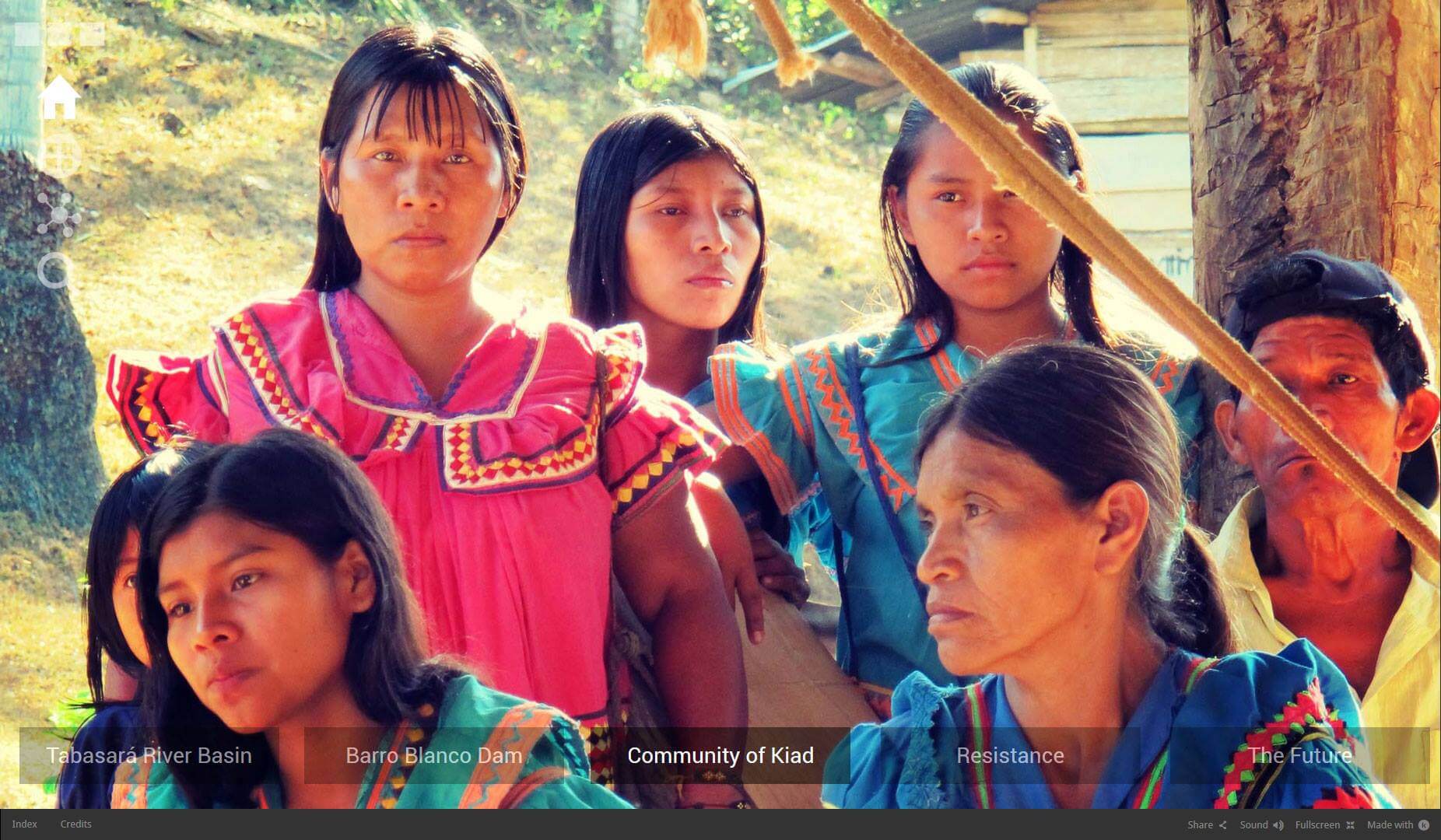 Screenshot from an experimental webdoc by Richard Arghiris
Support our journalism. Become a Patron!

If there’s one thing we know here at IC, it’s the depth to which media fails Indigenous Peoples. As we’ve often pointed out over the years, local, regional, international and special interest news outlets from all corners of the globe simply don’t pay attention to the many frontline struggles today that have Indigenous Peoples going head to head with mining companies, biotech firms, agribusiness consortiums, nation states, financial institutions, lobby groups, pharmaceutical conglomerates, construction companies, universities… and the list goes on. We estimate that the media only covers about 10 per cent of what’s actually happening in the world.

There is even less investigative journalism. Organizations like Propublica, the International Consortium of Investigative Journalists and the Center for Investigative Reporting–while offering a great deal of valuable knowledge about matters of great public interest–simply don’t investigate the historical experiences of Indigenous Peoples or compile critical reports that examine ongoing or emerging threats to Indigenous land rights, cultures, identities, languages and economies.

Special interest nonprofits are often left to pick up the slack. Unfortunately, the narcissistic tendencies of NPOs–coupled with their socially-irresponsible reliance on propaganda–ends up leaving behind contaminated puddles of information where we should have thriving springs of inviolable intelligence and insight.

IC Investigations (ICI) is a new program of Intercontinental Cry that will part ways from these and other unhealthy media trends to provide the public with ethically-grounded fact-based narratives on issues concerning Indigenous Peoples that require everyone’s undivided attention.

The future of digital storytelling

With the complex challenges that Indigenous Peoples often face, and the limited amount of information normally available to the public concerning those challenges, we have decided to do something unprecedented.

Instead of offering conventional written reports and films, we will create a unique and immersive educational experience for the public by producing interactive investigative documentaries, more commonly known as webdocs or idocs. 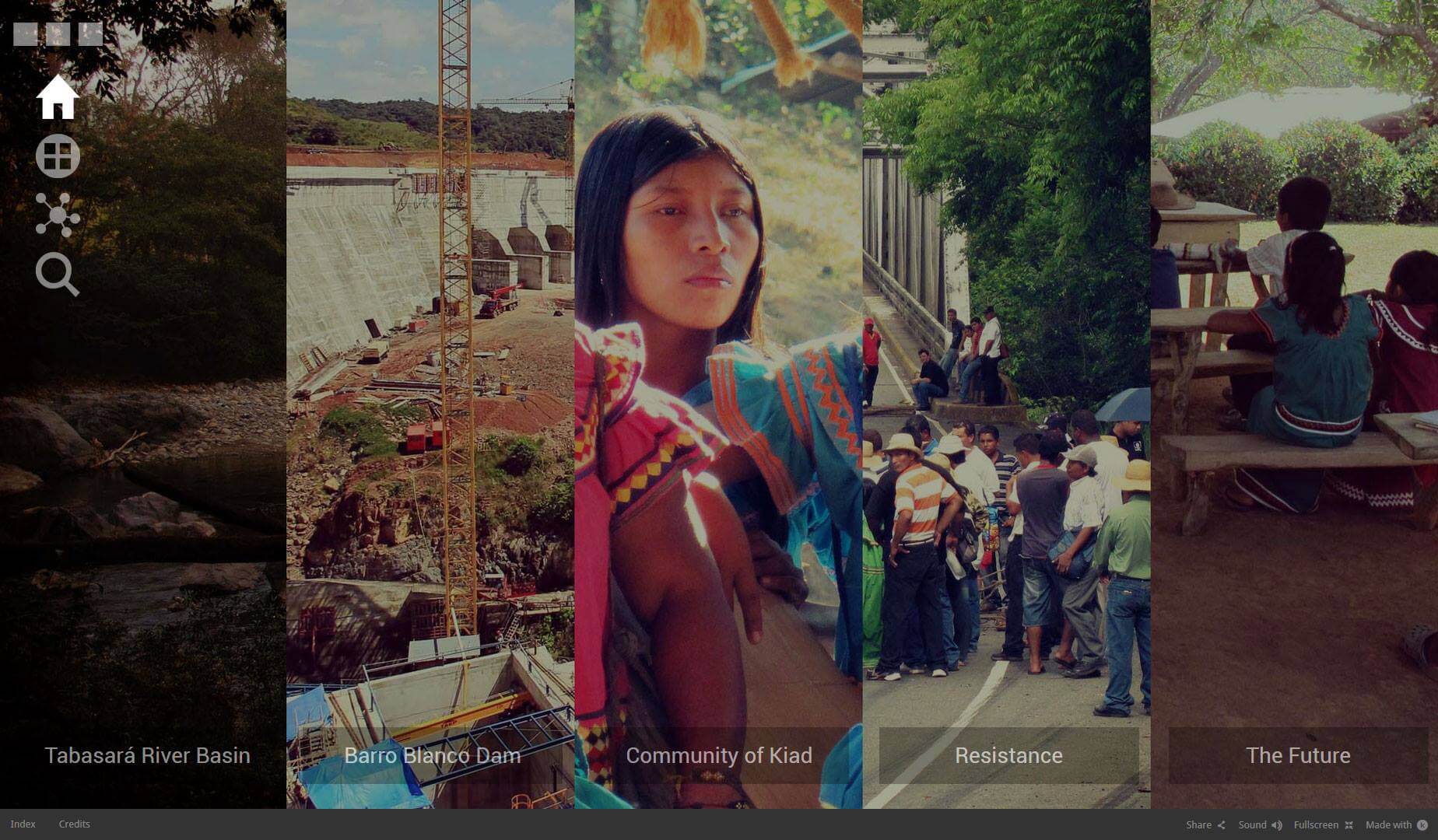 A non-linear media format that can resemble the functionality of a website, mobile phone app or television menu screen, webdocs join together audio, video, text, photography and interactive elements like maps and polls to create a unique storytelling experience.

Something that was simply not possible 30 years ago, there is one major benefit to webdocs that should have us all sitting up in our seats. They turn passive readers into emotionally-invested participants.

For this reason alone, we believe webdocs are set to revolutionize digital story-telling.

They also offer readers/viewers a way to navigate through a complex narrative at a pace that is most suited to them; whether that person is simply pressed for time or faces neurologically-based processing problems that make it difficult to follow unidirectional flows of information and gentrified classroom study methods.

In addition to that, webdocs overcome some major hurdles that storytellers and publishers now have to deal with on a regular basis.

Faceblocked
With facebook’s tendency to monopolize our attention spans, IC now only has a limited window to reach the vast majority of its audience. There is a very high probability that the audience we do end up reaching will not take the time to read through the stories we present. As many publishers are now beginning to realize, people on facebook will only spend a few seconds (if that) looking at any one newsfeed item before they move on. If our goal is to inform and educate the public, this presents a significant problem.

Poverty Media
With so few financial opportunities available for investigative journalism organizations (especially indigenous organizations) advertising often ends up becoming the deciding factor in whether or not a publication can survive for one more month. If, however, readers never actually leave facebook to spend some time on our website, no advertising revenue is generated. Indeed, facebook ends up profiting directly at our expense.

Theft
Content theft is another major problem. While all original content on IC is licensed under a Creative Commons license, some people do not include proper attribution when they use our work, an explicit condition of our desire to share rather than covet our stories. By failing to provide attribution, they also end up profiting at our expense. 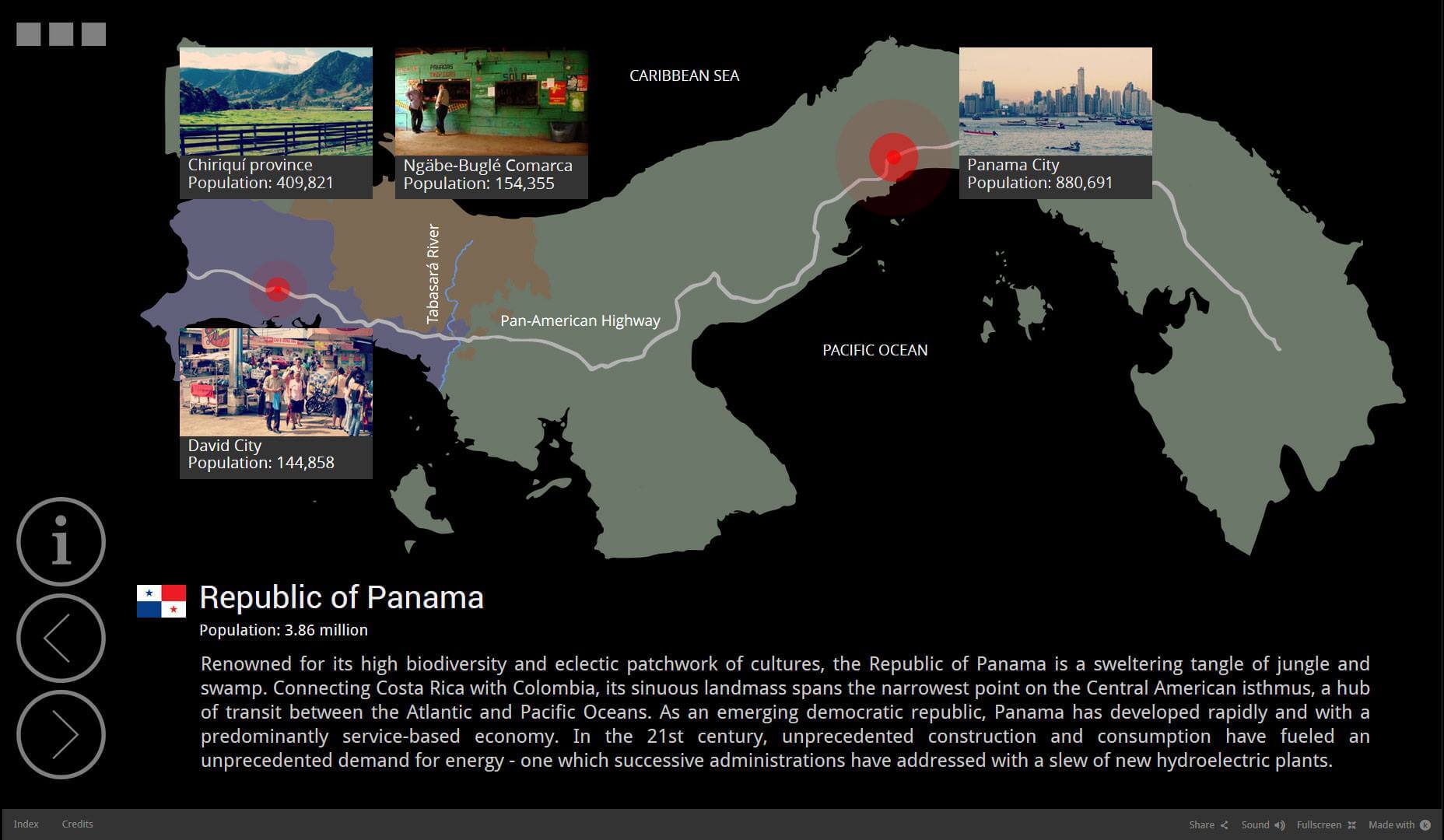 Webdocs can resolve all of these problems to varying degrees.

While there is no easy way to overcome the limited exposure we can bring to an investigative report on facebook (without paying them $200 per post), we believe that people will choose to immerse themselves in a webdoc in the same way that they are more inclined to watch a 30-minute video than spend 3 minutes scouring through a new investigative report.

The responsible use of integrated advertising in a webdoc, meanwhile, can help to lessen the financial burden that journalism organizations carry.

Finally, webdocs remove the convenience of theft that written reports offer by virtue of their existence. Given that webdocs are embeddable objects like videos on YouTube and Vimeo, it’s not possible to simply copy and paste a story that may have taken months to prepare. 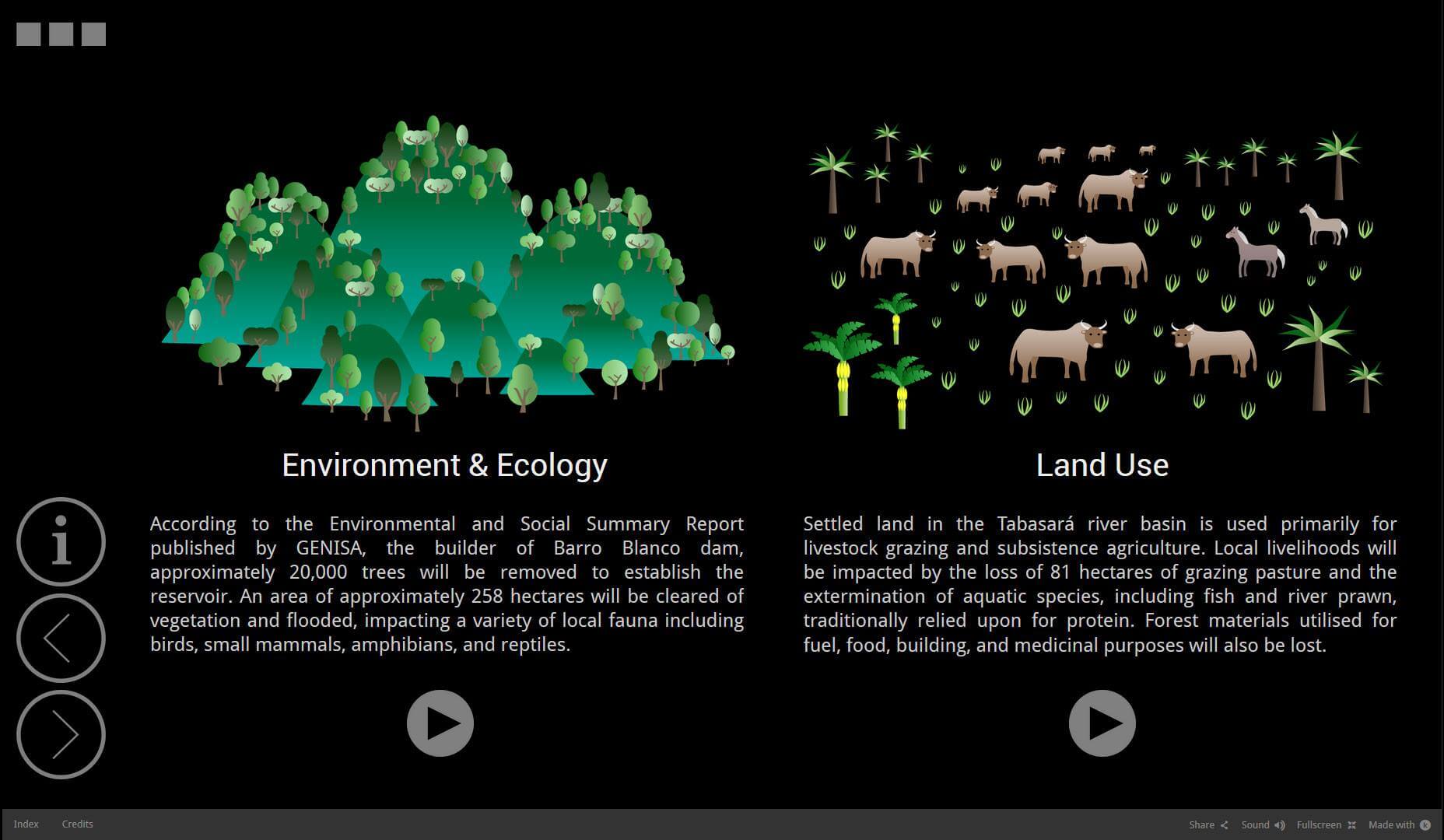 For all their potential benefits, webdocs are still trying to figure themselves out. Very few people have taken webdocs out of the sandbox and into the real world where they can be of most use. ICI will serve as a vanguard on the front line of this social media revolution.

Help us bring ICI to life! Donate to our #Newsfund

Once we have secured essential funding for ICI, our aim will be to produce at least 3 investigative webdocs per year.

Each of these webdocs will function as a standalone ICI project with their own set of expenses and require at least one journalist to produce the necessary project material. Each webdoc would also require several key personnel including a programmer, a graphic designer, a copy editor/fact checker, a film editor and someone trained to use Klynt, the interactive editing & publishing application that we have elected to produce our webdocs. 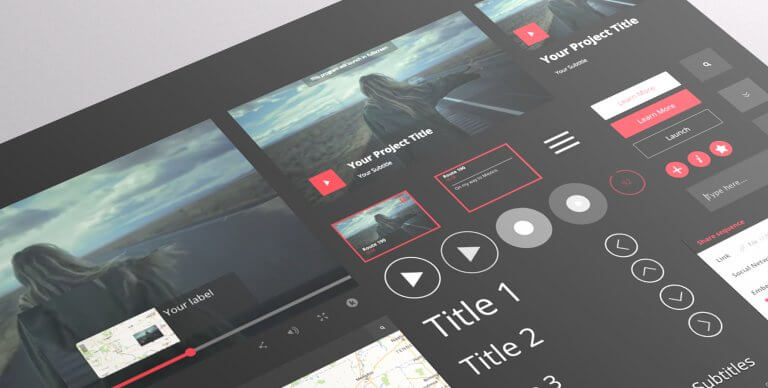 Our first line-up of webdocs will consist of an eight-part series that will explore the underreported realities of development in post-conflict Central America over the course of two years.

Richard Arghiris and Jennifer Kennedy, the project leads, elegantly explained the series in an early proposal this past summer:

At the tectonic juncture between the global north and south, the isthmus of Central America encompasses eight diverse nations. Lands forged in the fires of Spanish colonialism, yet profoundly ancient at their pre-Columbian roots, they represent a vivid synthesis of indigenous, African-descendent, mixed and European cultures.

Marred by political upheaval in the 1980s, Central America is today ‘at peace’ and enjoying burgeoning investment under the terms of the Mesoamerica Integration and Development Project (formerly the Puebla-Panama Plan). But despite the influx of foreign dollars and corporate megaprojects, poverty and violence remain endemic: in Panama, the mushrooming of the capital’s skyline is driving an insatiable thirst for hydroelectric energy, and in turn, the unlawful displacement of indigenous Ngäbe; in Guatemala, Mayan Chortí groups are rediscovering their collective memory as they defend against aggressive multinationals and institutional violence; in Honduras, the 2009 coup has ushered in a new era of murder and impunity, in part fuelled by a precipitous boom in palm oil production; in Nicaragua, the Chinese-built Grand Canal – unconsulted and unconsented – is threatening to wipe out fragile coastal cultures such as the indigenous Rama…

With that in mind, Richard Arghiris and Jennifer Kennedy went on to describe the aims of the two-year project:

Needless to say, IC‘s editorial board voted unanimously in favour of the project.

So far, two webdocs have been officially proposed for development in 2016. The first concerns the Ngäbe’s ongoing struggle with the Barro Blanco dam in Panama, a situation that Richard and Jennifer have covered extensively for IC. The second project will focus on the Maya Chortí in Guatemala, who are neck-deep in a hydro dam struggle of their own.

Our third webdoc in 2016 will focus on something a little closer to home.

This webdoc would also likely serve as the starting point for an entire series on water issues in Canada. John Schertow, IC‘s editor in chief, proposed six additional water webdocs:

1. “Toxins in the water” could look at Grassy Narrows, Akwesasne and Fort McMurray while zooming in on the 4000+ known toxic waste sites on reserve in Canada and the threat they pose to human health.

2. “Sacred Water” would look at different customs, beliefs and traditions centered on water.

3. “Living Water” would focus on Manoomin, Salmon, the food sovereignty movement, wasteful water practices and the importance of preserving fresh bodies of water.

4. “Defending Water” would focus on water rights, Bill C-51, Canada’s decision to change the navigable waters act during the height of Idle No More, and any other threats to water rights that are falling through the cracks.

5. “Redefining Water” would focus on the dozen+ proposals across Canada to empty natural bodies of water and redefine them as “tailings impoundment areas” (one of them being the currently-protected Teztan Biny/Fish Lake).

6. “Dead water” would focus on the proposed nuclear waste disposal site near the great lakes and similar threats (including, potentially, uranium mining in the north).

The potential value of this work speaks well for itself. Not only can ICI fill in huge gaps of knowledge (for which we’ve only just scratched the surface) educating hundreds of thousands of people around the world, it can take the webdoc genre to its limit and beyond.

It also opens the door to an endless line of supplementary media, including articles, short films, books, posters, websites, DVDs and classroom study materials designed for students of all ages. There’s equally endless potential for collaboration with other news outlets as well as indigenous communities and local organizations that are due for some time in the spotlight.

There’s only one thing standing in our way…

Help us bring ICI to life! Donate to our #Newsfund