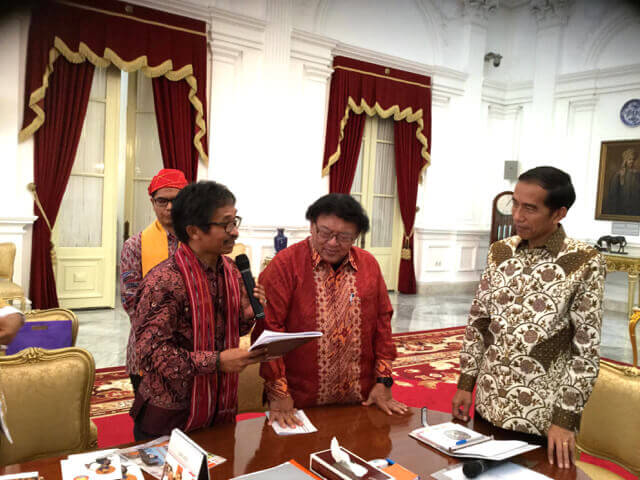 Jokowi reiterated his commitment to the Law on Recognition and Protection of Indigenous Peoples’ Rights (PPHMHA) on June 25 at a meeting with the Indigenous Peoples’ Alliance of the Archipelago (AMAN) in Jakarta. The draft law was shelved last year when the new government took office.

The president also acknowledged the importance of setting up a task force for Indigenous Peoples issues; agreed to the release, in principle, of Indigenous citizens who have been “criminalized,” or unfairly prosecuted by the law; and pledged to encourage economic development based on Indigenous models as a counterweight to big business.

“Overall, the president welcomed AMAN’s actions and ideas,” AMAN Secretary General Abdon Nababan said at a press conference after the meeting. “There is a process of reconciliation between the Indigenous Peoples and the state.

In Abdon’s view, Jokowi understands the issues and is aware of how widespread land conflicts affecting Indigenous Peoples around development projects are.

On the matter of criminalization of Indigenous citizens who resist unwanted development projects, AMAN gave Jokowi a list of 166 names, which Jokowi had already given to one of his deputies for processing, Abdon said.

Jokowi also tasked Environment and Forestry Minister Siti Nurbaya with following up on the matter of the task force, Abdon said.

Regarding the 2013 Constitutional Court decision that ruled that Indigenous Peoples’ customary land was not state land, the president promised to issue an instruction to follow up, Abdon said.

Wimar Witoelar, ex-spokesman of former Indonesian President Abdurrahman “Gus Dur” Wahid and founder of the New Perspectives Foundation, who also attended the meeting, said it was important to acknowledge that Indigenous Peoples often depend on forests for their survival and livelihoods. “I believe the president understands this point,” he said.

Produced in English by Philip Jacobson.

This article was originally published at Mongabay.com. It has been republished at Intercontinental Cry under a Creative Commons (CC BY-ND 4.0) License.