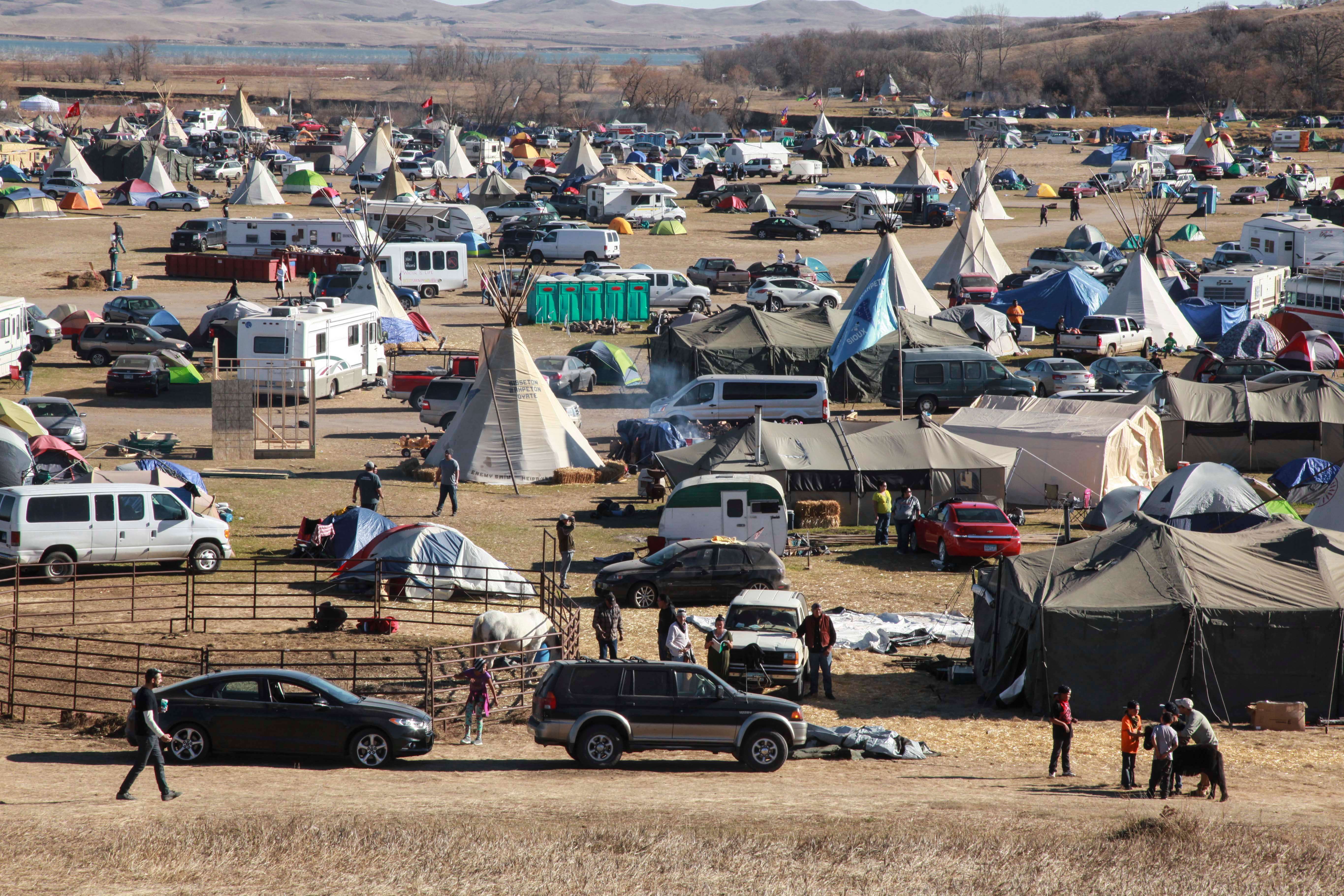 The U.S. Army Corps of Engineers on Friday informed Indigenous water protectors and their allies that they have nine days to vacate the main Dakota Access Pipeline protest camp—or else face arrest.

“This decision is necessary to protect the general public from the violent confrontation between protestors and law enforcement officials that have occurred in this area, and to prevent death, illness, or serious injury to inhabitants of encampments due to the harsh North Dakota winter conditions,” Col. John Henderson of the Corps said in a letter to the Standing Rock Sioux Tribe chairman Dave Archambault II.

The Oceti Sakowin camp, on the banks of the Cannonball River, will be closed Monday, December 5, the letter warned. Any individuals found on Army land north of the river after that date would be considered trespassing and could be prosecuted.

The Corps said it would establish a “free speech zone” south of the Cannonball River on Army lands.

But Dallas Goldtooth of the Indigenous Environmental Network (IEN), told the Bismarck Tribune that “there’s not enough land on the south side of the river where many are already camping; and a planned winter camp on 50 acres of reservation land near Cannon Ball is not yet ready, with groundbreaking set for next week.”

What’s more, he noted that “the eviction deadline is the day after more than 2,000 American war veterans are scheduled to arrive at the camp to stand in solidarity with Standing Rock,” the Tribune reports.

Archambault issued a statement in response to the Corps, saying the Standing Rock Sioux Tribe “is deeply disappointed in this decision by the United States, but our resolve to protect our water is stronger than ever.”

“It is both unfortunate and ironic that this announcement comes the day after this country celebrates Thanksgiving—a historic exchange of goodwill between Native Americans and the first immigrants from Europe,” he continued. “Although the news is saddening, it is not at all surprising given the last 500 years of the treatment of our people. We have suffered much, but we still have hope that the President will act on his commitment to close the chapter of broken promises to our people and especially our children.”

The notice from the Army Corps comes less than a week after Morton County Sheriff’s deputies sprayed rubber bullets, mace and water on more than 400 people demonstrating at a bridge blockade not far from the camps. Temperatures were below freezing when protectors were repeatedly hosed down by police that Sunday night, November 20. There have also been reports that concussion grenades were fired at protectors. Dozens were hospitalized, including 21-year-old Sophia Wilansky, who may face the amputation of her arm, and Cheree Lynn Soloman, who is fundraising for eye surgery.

“If you were concerned about the safety of the fucking people you would have taken your ass out there and you would’ve cut their fucking hoses,” lamented Kash Jackson, an Army veteran from Michigan. His Facebook LIVE rant was broadcast shortly after the Corps announced its warning to water protectors that anyone choosing to stay on Corps land beyond December 5 would be doing so “at their own risk.”

“You stand firm, Standing Rock,” Jackson continued. “You stand firm right where you’re at. They want to push you off that land. It’s not their land to begin with.”

Meanwhile, IEN said in a statement: “We stand by our relatives of the Oceti Sakowin and reaffirm their territorial rights set in the Fort Laramie Treaty of 1851. If the Corps wants to keep people safe and prevent further harm, then deny the easement, rescind the permit, order a full Environmental Impact Statement, and send Department of Justice observers.”

“This decision by the Army Corps and the United States is short-sighted and dangerous,” the statement read. “We have already seen critical injuries cased by the actions of a militarized law enforcement. We implore President Obama and the White House to take corrective measures and to stop the Dakota Access Pipeline once and for all.”

The group, along with Honor the Earth, the International Youth Council, and the Camp of the Sacred Stones, is planning a news conference for Saturday afternoon, which IEN will live-stream from its Facebook page.

Filmmaker Josh Fox, who has been outspoken in his opposition to the crude oil pipeline, called the Corps’ eviction notice “a major act of aggression against basic rights of peaceful assembly and protest in the U.S. and constitutes a violation of treaties as well as the U.S. constitution’s guaranteed right to protest and assemble.”

“Oceti Sakowin, the main camp for water protectors, is a beautiful self-organizing community,” Fox continued. “It stands as not only the main place for the protest movement to assemble and organize, but it also represents a major leap forward for our combined movements for the environment, Indigenous sovereignty, and real democracy in America. If the Army Corps tears down this protest camp hundreds more will spring up in its place. A crucial alliance between indigenous values, native sovereignty and environmental movements has been forged here. We expect that the Standing Rock movement will find new and creative ways to fight the Dakota Access Pipeline no matter what, and that the Standing Rock movement and its alliances will find many areas of common ground and protest. We will fight fracking. We will fight pipelines.”

This article was originally published at Common Dreams. It has been re-published at IC under a Creative Commons license.