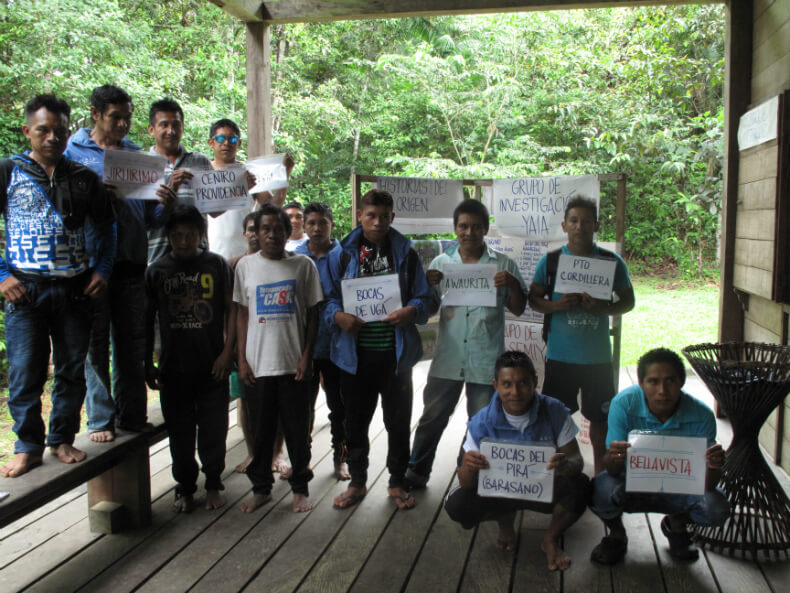 After five years of legal contests and uncertainty, the Colombian Constitutional Court has confirmed that Yaigojé Apaporis, an indigenous resguardo (a legally recognized, collectively owned territory), also has legitimate status as a national park.

The decision is cause for celebration for Indigenous Peoples who call the region home. But it is less welcome news for Canadian multinational mining corporation Cosigo Resources, the company contesting the area’s national park status. The court’s ruling immediately and indefinitely suspends all mining activities in the park, including Cosigo’s license to mine gold from one of Yaigojé’s most sacred areas.

In the broader context of Colombia’s push to expand mining activities in the name of development, the court’s decision is seen as a significant precedent.

Since the 1980s, Colombia has protected more than 24 million hectares of the Amazon, placing an area the size of Britain back in the hands of its traditional owners. By choosing the rights of Indigenous Peoples and a new national park over multinational mining interests, the court’s decision safeguards Colombia’s achievements rather than undermining them.

The battle for Yuisi’s golden lens

Straddling Amazonas and Vaupés states, comprising a million hectares of the Northwestern Colombian Amazon, the pristine forest region of Yaigojé Apaporis is rich in both biological and cultural diversity.

The area hosts endangered mammals such as the giant anteater, jaguar, manatee and pink river dolphin. It is also home to the Makuna, Tanimuka, Letuama, Barasano, Cabiyari, Yahuna and Yujup-Maku Indigenous Peoples, who share a common cosmological system and rich shamanistic traditions. Together these populations act as Yaigojé’s guardians, a role that was strengthened in 1988 when, with the assistance of Colombian NGO Gaia Amazonas, they successfully established the Yaigojé Apaporis resguardo over their traditional territory. But this status has recently been tested.

Under Colombian law, a resguardo recognition grants its inhabitants collective ownership of and rights to the soil, but the subsoil remains in the control of the state and vulnerable to prospecting. With companies seeking to exploit this loophole, the Colombian Amazon has seen a tidal wave of mining interest since the mid-2000s, with the government declaring mining an “engine for development.”

Riding at the crest of this wave, in the late 2000s Canadian mining multinational Cosigo Resources made clear to local communities in Yaigojé its intention to mine for gold at a site within the resguardo known as La Libertad or Yuisi.

Local indigenous leaders say Cosigo became known to them when company representatives visited their malocas (traditional riverside houses). The indigenous leaders allege that officials offered them money in return for assurance of support the company to mine in Yuisi. These offers were rejected.

At Yuisi, a wide stretch of the Apaporis river cascades over rocks, forming roaring rapids. To the people of Yaigojé it is a vital sacred site, inextricably tied to their story of origin, identity and ability to care for the territory and the planet as a whole. Elders say “Yuisi is the crib of our way of thinking, of life and power. Everything is born here in thought: nature, the crops, trees, fruits, everything that exists, exists before in thought.”

Local shaman describe the gold and other minerals that form the bedrock of their territory as ‘lenses’ that allow them to see into the Earth, divine or diagnose any problems and correct them through rituals, prayer and thought. If gold were to be removed from Yuisi, they would lose their ability to cure and manage their territory as they have done for millennia. This is because an integral part of the territory itself would be lost. The notion that territory stops at the soil “as deep as the manioc’s root” is alien.

With negotiation with Cosigo out of the question, the traditional authorities in Yaigojé called an urgent congress of the Asociación de Capitanes Indígenas del Yaigojé Apaporis (ACIYA), an indigenous organization formed of groups living along the Apaporis River, in the area of Yaigojé that lies in Amazonas State. Having discussed the dangers posed by Cosigo’s presence and plans, ACIYA agreed that they must seek help from outside sources to further protect their territory.

“The best way to shield the territory was to call upon the state. In other words: Western disease is cured by Western medicine. If all mining licenses are given by the state, it is necessary to call on the state to defend the territory,” says Gerardo Macuna, a representative of ACIYA.

Advised that achieving national park status would extend protection to the subsoil, ACIYA and its supporters formally requested that the Colombian Government create a national park over their resguardo and traditional territory.

The people’s effort to add a third layer of protection for their territory was successful. In October 2009, Yaigojé Apaporis became Colombia’s 55th national protected area, but celebrations were short lived. Just two days after the area was awarded national park status, Cosigo Resources was granted a mining title for the Yuisi area, catalysing an epic struggle between Colombia’s will to protect the Amazon, with the help of indigenous inhabitants, or exploit it at their expense by prioritizing mining.

Deep in the Amazon, a smoking gun 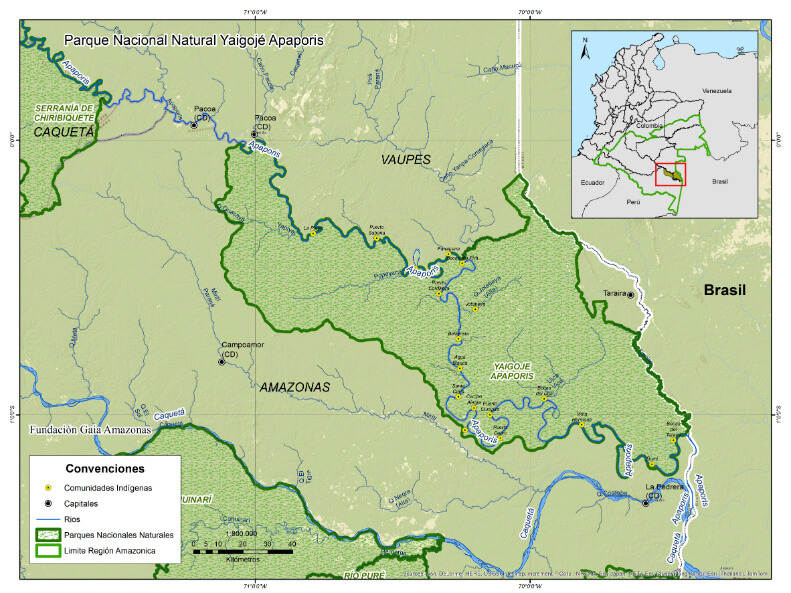 Despite having been granted a license, Yaigojé’s new status as a national park remained an obstacle to Cosigo. The national park status, and its accompanying legal protections for the subsoil, would need to be revoked before mining could begin.

Facing stiff opposition from both ACIYA and the Colombian National Parks authorities just as Cosigo appeared to be fighting an uphill battle, the company got what seemed an almost impossible stroke of luck. A few months after Yaigojé was declared a national park, members of indigenous organization ACITAVA from the region of Yaigojé lying in Vaupés State launched a legal challenge to Yaigojé’s status at the Colombian Constitutional Court. Led by a local settler named Benigno Perilla, the challengers said that they had not been fully or adequately consulted in the process of creating the national park and it therefore violated their right to Free Prior and Informed Consent.

With an apparently complex conflict unfolding between Yaigojé’s Indigenous Peoples and the area’s national park status–its ecological and social integrity held in the balance–a legal deadlock ensued. This situation persisted for three years, until January 2014, when in an unprecedented move, three judges from Colombia’s Constitutional Court made the decision to travel to the heart of the Colombian Amazon to hold a hearing and consult with communities first hand.

Jorge Iván Palacio, president of the court, explained the court’s decision to make the journey by stating that “there is no justice unless we know what they think in the communities.” The ensuing hearing thoroughly vindicated his observation.

Before 160 indigenous inhabitants from along the Apaporis River and the judges, Benigno Perilla publicly admitted that his and ACITAVA’s legal strategy was encouraged, organized and paid for by Cosigo Resources. In what would prove the critical turning point in the case, the indigenous members of ACITAVA who had supported the challenge made a public apology, said they had been misled and declared their support for the creation of the national park.

A new dawn for indigenous-led conservation

Although it has been more than another year coming, the Colombian Constitutional Court has ousted Cosigo and legitimized the declaration of Yaigojé Apaporis as a national park. The decision recognizes the authority of the area’s Indigenous Peoples and protects their fundamental rights to culture, identity and consultation.

The decision is regarded as a significantly positive precedent for future conflicts between mining operations, protected areas and their indigenous inhabitants, at a time when Colombia has declared mining to be in the national interest.

The judges found sufficient evidence of wrongdoing by Cosigo to ask Colombia’s Justice Minister to open an investigation into the company’s consultation processes and interactions with communities in the Yaigojé area. Recently published revisions to Colombia’s projects of national interest have seen Cosigo’s project removed from the list. The company is said to be reviewing its legal options.

Confirming the compatibility of indigenous resguardos and national parks, the court has also opened up the possibility for others to follow Yaigojé’s example and enhance the protection of their territories from destructive or unwanted “development.”

Since Yaigojé was declared a national park, and in spite of the legal wrangle over its future, ACIYA and local indigenous youths have been pioneering a powerful new conservation paradigm that values indigenous knowledge and places it at the root of national park management.

ACIYA’s work to find a method of conservation that both works for them and allows for close collaboration with Colombia’s national park authorities is the subject of a recent film and won the group the prestigious UNDP Equator Prize in 2014. Their approach stands in stark contrast to technocratic, neo-colonialist conservation norms founded on a misplaced belief in pristine, unmanaged wilderness. These have been criticized by Indigenous Peoples and rights groups for excluding and forcibly displacing indigenous communities, fencing them out of their own lands and so obstructing their right to practice their cultures.

As part of their program, 27 young indigenous leaders from nine communities in Yaigojé have engaged in a deep process of cultural research. Advised by their elders, they have documented, mapped and recorded their peoples’ traditional practices for safeguarding and conserving the forest. In the words of one researcher, the aim has been to “transmit traditional knowledge to the younger generations and protect our ancestral territory.” So far, they have succeeded in doing both.

The research produced by ACIYA will now be used to define the management of the Yaigojé Apaporis National Park, further legitimizing local indigenous knowledge systems that have protected the life-support capacities of this rainforest region for generation after generation.

“Indigenous people are the natural allies of the rainforest and the whole environmental movement,” says former director of Gaia Amazonas Martin Von Hildebrand. “They have the traditional knowledge, they are organized. We just need to support them with what they need to run their own territories.”