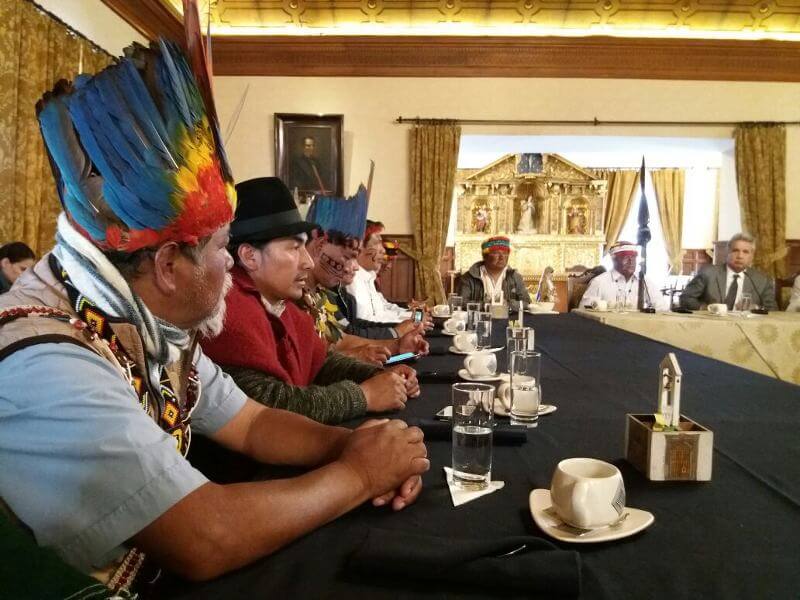 December 11, 2017—They walked in the stifling heat and rain of the Amazon rainforest. The walked in the burning sun and freezing cold of the Andes mountains. And after two weeks and more than 200 miles, thousands of indigenous leaders and community members descended into Quito today and emerged triumphant after a meeting with Ecuador President Lenin Moreno, garnering major concessions on rights, education, and territories.

In the spirit of historic marches of the past that advanced indigenous rights, land titles, or even deposed presidents, Ecuador’s indigenous movement set out from the jungle town of Puyo seeking concrete results from a dialogue process stymied by the government’s unwillingness to cede anything.

However, during a meeting today (Dec. 11) between Ecuadorian indigenous leaders and President of Ecuador Lenin Moreno that lasted several hours, the government committed to resolve multiple key demands including an end to new mining concessions in indigenous territories and the reinstatement of an indigenous bilingual education program.

Today’s meeting and surprise announcement jump-starts a renewed dialogue between the indigenous movement and the government. Many other issues remain, such as amnesty and pardons for rights defenders, as well as an end to new oil concessions on indigenous lands.

Today’s presidential promise does little to abate environmental destruction and rights violations from existing mining concessions. However, it is sign that after a decade of repressive divide and conquer tactics by the former administration of Rafael Correa and a crackdown on civil liberties, Ecuador’s indigenous movement is resilient and relentless in its pursuit of rights. All eyes are on the Moreno government to comply with the commitments he made today, and to continue to negotiate in good faith – with results – as the dialogue continues.