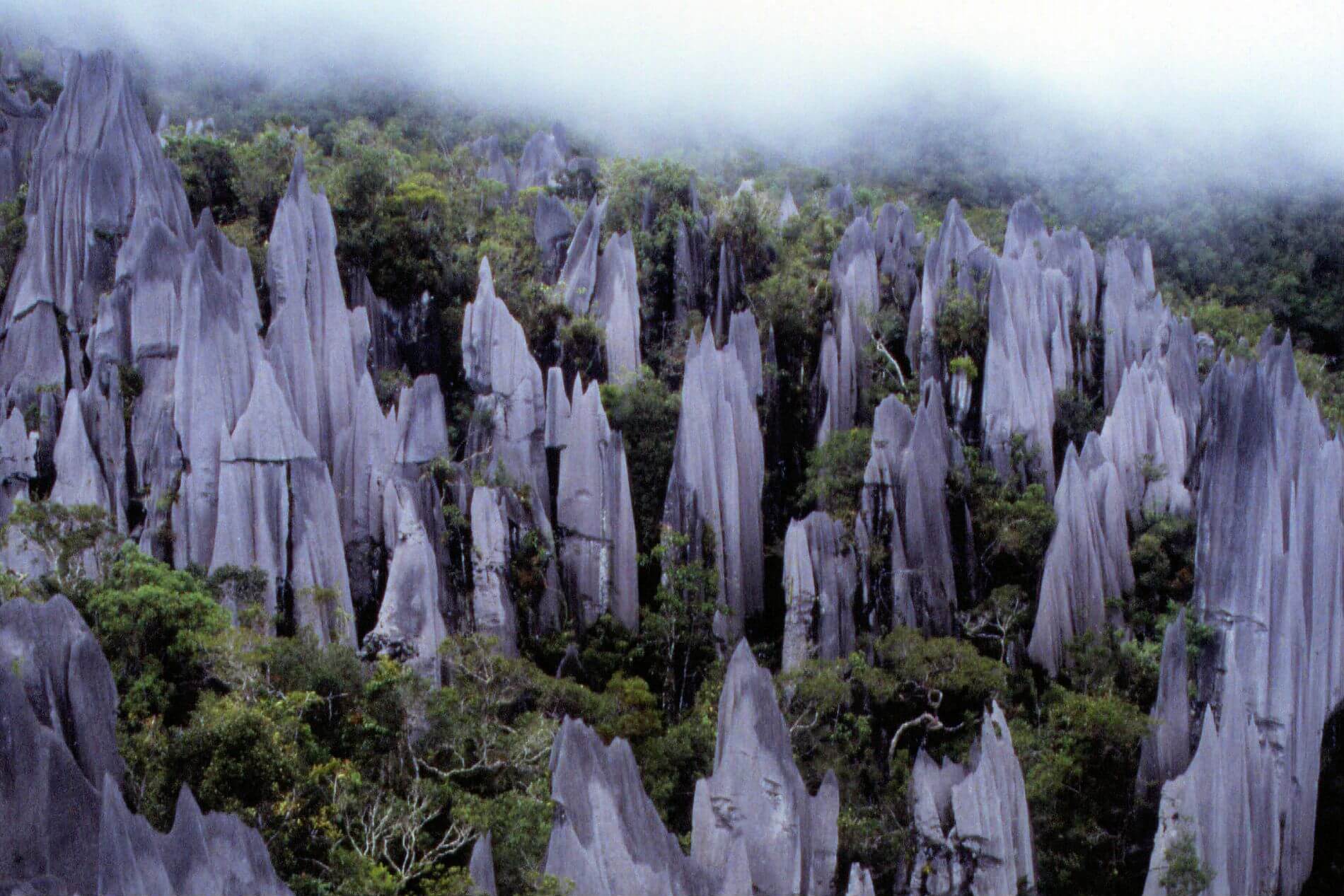 Millions of hectares have been targeted for developing monoculture plantations; but there's still time to halt the destruction
Pinnacles in the Mulu National Park, Malaysia. Photo: Slimguy
Support our journalism. Become a Patron!

Despite their proximity to the Gunung Mulu National Park, a UNESCO World Heritage Area, the indigenous Penan community of Kampung Batu Bungan in Mulu, the state of Sarawak, reported in January 2019 that a road construction for an oil palm plantation is encroaching upon their customary territory. The community set up a blockade against Radiant Lagoon operations, a Malaysian palm oil company, and filed a police report in Marudi to halt the encroachment. Reportedly, road construction workers simply dismantled the blockade.

In addition to the road, the company is already preparing seedling of oil palms. At the nursery site, Penan and Berawan villagers from the Mulu region found on March 2019 dozens of kilograms of Antracol, a pesticide whose use has been banned by the European Union for fears it may damage the unborn child. This was found in Radiant Lagoon’s greenhouse for oil palm seedlings.

Government pledges versus government actions
In September 2018, the federal Minister of Plantation Industries announced that the new government would not allow more expansion of oil palm plantations in the country in its efforts to ensure that Malaysia maintains a 50 per cent forest cover. By December, Sarawak also announced that it would be adopting this commitment. However, many questions remain as to what this pledge actually means.

Between the late 1990s and mid-2000s, the Sarawak Forests Department has issued a total of 43 timber tree plantation licences, covering an area of 2.8 million hectares under its Licence for Planted Forests (LPF) system.

Some of the LPF licences allow companies to use no more than 20 per cent of their concession areas for the cultivation of oil palm. Plantable areas are estimated to be at 1.3 million hectares for timber trees and 285,520 hectares for oil palm. As of December 2013, 325,314 and 146,578 hectares have been planted with timber and oil palm trees, respectively. Despite the lack of more recent official figures, the organization Sahabat Alam Malaysia, SAM (Friends of the Earth Malaysia) believes that most available licences in Sarawak have already been handed out by now. However, not all areas have been developed, as these are large concession areas.

In addition, since the late 1990s, the Sarawak Department of Land and Survey also has been issuing plantation permits on land that is not under the authority of the Forests Department. Such land in turn may be put under the authority of agencies such as the Land Custody and Development Authority (LCDA) and the Sarawak Land Development Board (SLDB). They may be developed either by the private or the public sector, or through some form of private and public partnerships, with or without the involvement of native communities. Based on the data on the websites of various state and federal agencies, SAM (Friends of the Earth Malaysia) has estimated that today, the land targeted for plantations outside of the LPF system may stand around 800,000 hectares. However, no complete data is available on the total size of the licences that have actually been issued and to what extent they involve the cultivation of oil palm. Meanwhile, the Malaysian Palm Oil Board (MPOB) shows that in 2017, oil palm cultivation areas in Sarawak has reached 1.5 million hectares.

It is important to note that oil palm plantations are not the only cause of conflicts and forest destruction in Malaysia. Monoculture tree plantations for timber extraction and hydroelectric dams are two other causes of conflicts and deforestation. The development of monoculture tree plantations for timber extraction and oil palm trees is in fact allowed on reserved production forests. In Sarawak, such forest conversions also take place on non-reserved state-land forests.

The central problems are thus deforestation and the violations of indigenous peoples’ rights and their customary land rights, as the case in Batu Bungan shows. Oil palm is only but one of the commodities of choice.

Therefore, the ambition of the new federal government to maintain a 50 per cent national forest cover appears to rest on statistics that consider monoculture plantations, along with the adjacent fragments of forests, as ‘forest cover’. This would be in line with the misleading UN’s FAO definition of forests.

According to the Kampung Batu Bungan community, considerable destruction to the forest, river and other resources has already taken place as a result of the road building alone. Even though the community had first heard of the arrival of the oil palm plantation in 2018, they never consented to the project. The absence of any meaningful consultation process also means that people are left without crucial information. They did not receive documents identifying the project proponents, its agents, the boundary and size of the project operations and other important details. They also wonder about the profits that are derived from the trees felled for the road construction. The community demands that the encroachment onto their customary territory is immediately halted.

This situation is not an isolated case in Sarawak, or even Malaysia. It is not just about oil palm plantations. As the Report of the National Inquiry into the Land Rights of Indigenous Peoples published by the Human Rights Commission of Malaysia (SUHAKAM) in 2013 stated, the violations of the indigenous customary land rights in the country is a systemic issue and the lack of their tenure security must first be addressed.

This, in line with the federal and state governments’ commitment to halt deforestation, puts into the spotlight the need to review and revoke large monoculture licences that affect indigenous customary territories and reserved production forests and non-reserved state-land forests, regardless of the commodity involved.

Further, the federal cabinet needs to provide an update on the status of the SUHAKAM national inquiry report. It is time for the federal and state governments to take heed of the recommendations of the 2013 SUHAKAM report and protect the rights of indigenous peoples in the country. It is also imperative that the federal and state governments respect the call of the Penan community of Kampung Batu Bungan. Their proximity to the internationally renowned Gunung Mulu National Park must also be considered.

While state agencies have designated at least 3.4 million hectares of mostly forested areas for the development of monoculture plantations since the 1990s, including for oil palm plantations, many of these plantations have not been fully developed yet. There is still opportunity to halt the destruction of many indigenous territories and recognize their rights to their customary land. This would protect a sizeable area of actual natural forest cover, including the forests that provide a home to the Kampung Batu Bungan in Mulu, Sarawak.

This article was originally published by the World Rainforest Movement.