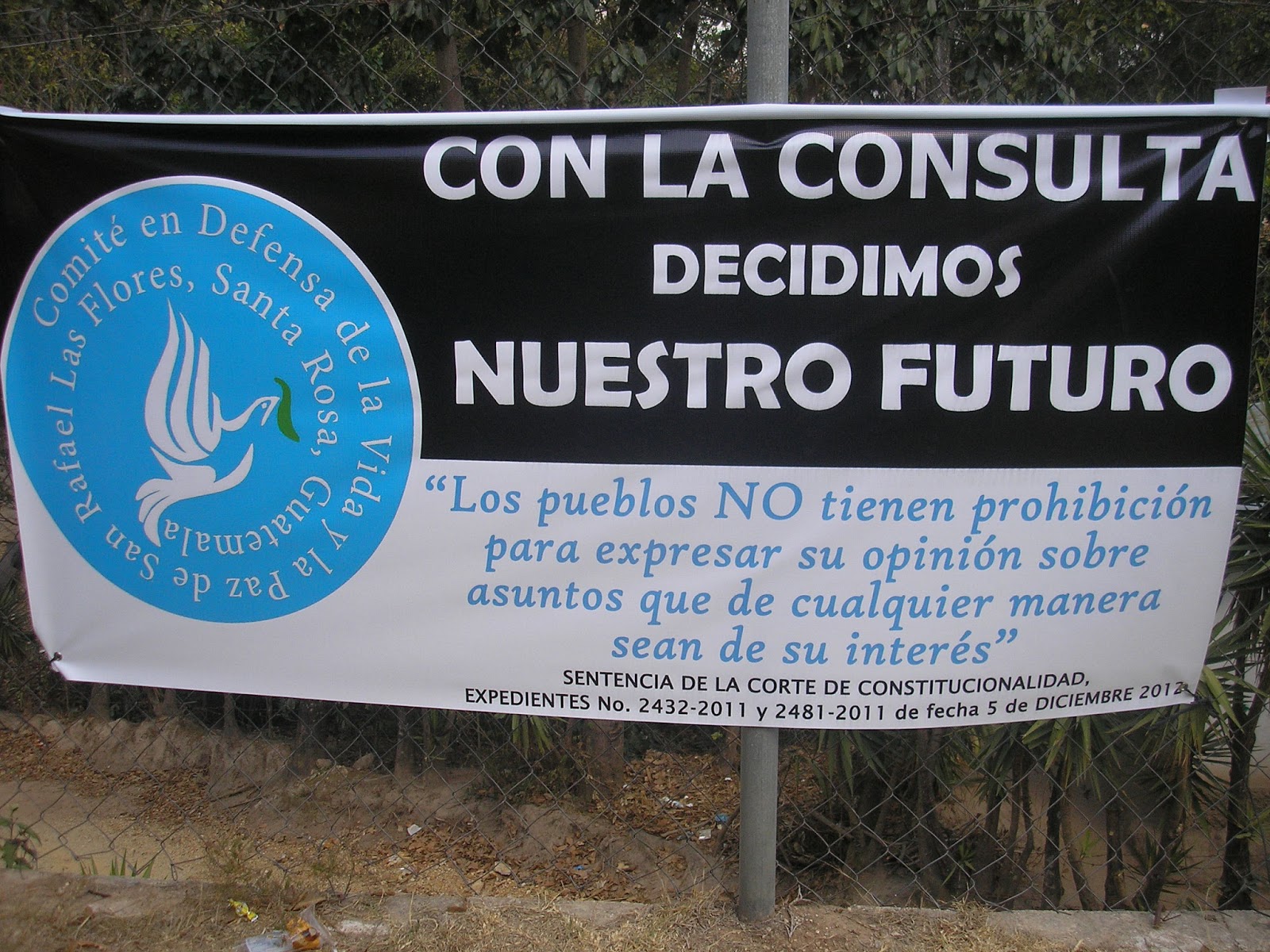 "With the referedum we decide our future" Banner of the Committee in Defense of Life and Peace (Photo: NISGUA)
Support our journalism. Become a Patron!

Mining in Guatemala has often been to the detriment of the Indigenous Peoples of the country as it has proven to take away their ability to control their lands and livelihoods. It pollutes their farmlands and water resources, forces relocation, and diminishes their ability to continue their way of life. However, the newly announced moratorium on the granting of new mineral mining licenses has been rejected as a political show intended to calm widespread resistance to harmful mining projects.

The proposed two-year moratorium is similar to the moratorium put in place during the previous presidency of Colom. Since current president Molina lifted that moratorium a year and a half ago, over one hundred licenses have been granted for mining and exploration.

Considering that during his announcement of the Moratorium, Molina made it very clear that Tahoe Resources’ contentious Escobal mine project would be allowed to continue, it seems clear that the purpose of the moratorium is not to advance Indigenous rights, but to placate resistance.

Community members from the departments of Santa Rosa and Jalapa have been partnering with local human rights organizations to peacefully resist the Escobal mining project for the last two years. They have been facing increasing violence, intimidation and criminalization. Last year, a peaceful protest outside the mine concession area was attacked without warning by members of the mine’s private security agency, the National Civil Police and the army, using tear gas cannons, firearms, rubber bullet guns, and attack dogs.

A number of local referenda, organized by the local authorities, and regulated by Guatemalan Municipal Code have resulted in votes of 93% – 99% of NO to chemical mineral mining. In addition to these referenda, since 2011 eight community consultations have been conducted in which more than 35,000 people have rejected the project. Over 250 administrative objections have been submitted by local residents to the Ministry of Energy and Mines and were quickly ignored.

Without permission from the local Indigenous communities and without a social license, the Ministry of Energy and Mines has granted the license to Tahoe Resources’ Guatemalan subsidiary Minera San Rafael.

President Molina announced the moratorium as necessary to allow the government to pass reforms to the 1997 Mining Law, which fails to fulfill national and international mandates that require the State to consult with Indigenous Peoples regarding policies that will significantly impact their territories. The announcement was just two months after the license was granted for the Escobal mine.

However, the original peoples of Guatemala never asked for a moratorium on mining licenses. They have already conducted a number of democratic processes in line with the laws and codes of Guatemala. These processes have overwhelmingly rejected the Escobal mining project. Yet, the Guatemalan government has ignored the demands of the local communities, forcing the project on them without consent.

This moratorium looks like an excuse to push through ‘reforms’ that do nothing to address the situation of lack of respect for communities’ right to consultation on projects that impact their lives, livelihoods and territories. It also shows the hasty decision-making of the government when it lifted the previous moratorium. As this new two-year moratorium is being proposed reforms to the 1997 Mining Law have already been initiated. This leaves suspicions high that the moratorium will be quickly repealed in the case of passed reforms or the creation of new laws, and makes the moratorium seem weak and needless.

The Network in Solidarity with the People of Guatemala (NISGUA) has been working with the local Indigenous communities to advocate for their right to free, prior and informed consent. Guatemala has signed and ratified the International Labor Organization’s Convention 169 and has also signed the United Nations Declaration on the Rights of Indigenous Peoples. Both of these human rights instruments outline the right of Indigenous Peoples to free, prior and informed consent.