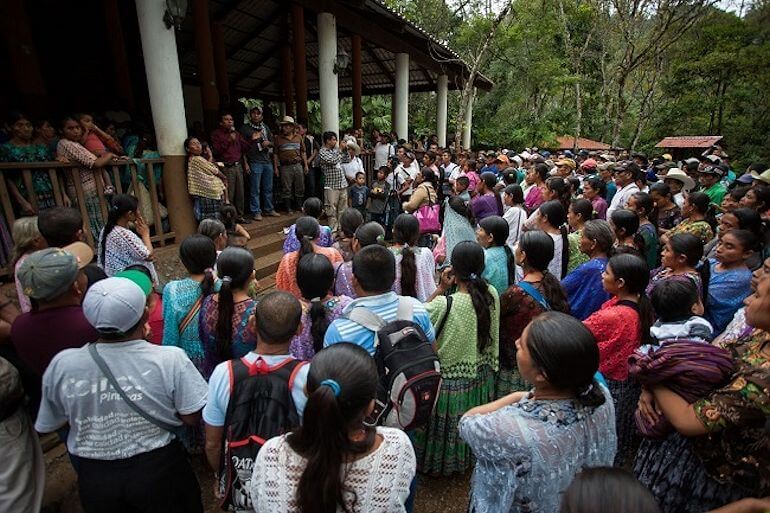 Indigenous Communities in Guatemala Fight Against the Privatization of Sacred Sites

Community members' recuperation of the park. All photos by Jeff Abbott.
Support our journalism. Become a Patron!

In recent years, the popular tourist attraction of Semuc Champey in the Guatemalan department of Alta Verapaz has become a point of social conflict for the indigenous Q’eqchi’ Mayan communities surrounding the site. On February 8, tensions erupted and led to the occupation of the municipality building of Lanquín by over 200 members of the communities near the tourist attraction. Community members demanded the recuperation of the site. Since that day, residents have maintained management of the park.

Since February 8, the community has continued to welcome tourists to the Semuc Champey site, as well take entrance fees and maintain the grounds.

As the indigenous-led recuperation of this park continues, the conflict has shed light on a longstanding dilemma in Guatemala around indigenous communities’ access to sacred sites.

“We were here before the state discovered that there was something to exploit and transform into monetary gain,” said Francisco Pop Pop, an elderly resident of one of the communities near the national park. “My father taught me that we are supposed to protect this land, and to work this land for our children, and future generations. Our Grandfathers and Grandmothers gave us the responsibility of protecting the natural resources; we should not permit the state to profit off what we are supposed to administer.”

Semuc Champey has become a popular eco-tourist attraction because of the unique natural beauty of the pools that sit above a subterranean river deep in the jungle of the department of Alta Verapaz. The area was declared a protected area, and the park was placed under the control and management of National Council of Protected Areas (CONAP).

In 2000, the residents were given the titles to the lands around the site. But in 2005 congress passed Decree 25-2005 without consulting the residents, which declared the area a protected area, and expanded the protected land beyond the initial protected area. During this time the municipality was administering Semuc Champey, but this was changed in 2013 when CONAP and the Guatemalan Institute of Tourism (Inguat) took over management of the site, and barred the communities from the using the sacred site.

“We have gone to the streets to recuperate our site,” said Crisanto Asig Pop, a 61-year-old member of the Q’eqchi’ indigenous authority. “This is the land of our ancestors; we are the true owners and caretakers of this land. If we wanted to use the site, we had to pay 30 Quetzales to enter. This is why we began to organize and demand our land back.”

Since 2013, the residents of the Q’eqchi’ Mayan communities of Santa Maria Semuc, Se Mil, Se Subin, Chiqanus, which make up the municipality of Lanquín in the department of Alta Verapaz, have struggled for years to recuperate the sacred turquoise pools that have become a popular tourist attraction. The recuperation of the Semuc Champey in February follows several months of consistent protest over the site. Thousands mobilized in September 2015 to protest the cost of entrance. Months later in December 2015, residents occupied the municipal building to demand their right to the area. The same day the communities expelled the Guatemalan National Police and representatives from CONAP.

Following the recuperation of the site, residents of the neighboring villages have distributed the work of maintaining the site, including the cleaning up garbage, collecting tourists’ entrance fees, and guaranteeing the security of tourists to the popular pools.

Support for the residents of the region has come from across Guatemala, and especially other indigenous authorities of Guatemala.

“We are here to strengthen the indigenous authority of this beautiful site, where the authorities have taken the initiative to recuperate the administration of their territory,“ said Diego Coti of the Council of Indigenous Authorities of Maya, Xinca, and Garifunas, who spoke in front of the Cahabón River. “The communities are supported by municipal laws, as well as Article 3 of the Universal Declaration on the Rights of Indigenous peoples from the United Nations says that the (indigenous) peoples have the right to the liberty of self-determinations; they are the ones that determine how they will administer and how they will govern the territory Q’eqchi’.”

The recuperation hasn’t come without repression.

On March 4, Asig Pop and Ramiro Asig Choc, another indigenous authority from the community were arrested by the Guatemalan National Police and charged with “usurping” the land.

The two reportedly had received a call early in the morning from someone claiming to be from the Guatemalan National Paper, Prensa Libre. They were picked up by a new grey pick-up and then transferred to a police truck.

The community’s move to recuperate and occupy the tourist destination has further exposed the racism that has gripped Guatemala. Following the move to recuperate the site, Guatemalan tourism board, InGuat, issued a security warning to tourists interested in visiting the site. The Guatemalan media followed, and issued a warning reported not to visit the site, with Guatemalan news magazine Diario Digital, declaring, “Don’t travel to Semuc Champey.”

“(Residents of Rural communities) have taken the steps that can affect the entrance and freedom of movements (of the site),” wrote the Program for the Assistance of Tourists of InGuate in their statement.

But the communities have attempted to counter this miss-information from the State bodies, and have maintained that tourists are still welcome to visit the site.

“Tourists are more than welcome to come and visit Semuc Champey,” said Pop Pop. “Everyone in the world is more than welcome to visit one of the most beautiful sites in all Guatemala that is administered by the community itself, and that is continuing the work that was given to us by our Grandfathers and Grandmothers.”

The indigenous populations of the western hemisphere have faced an assault on their identity for over 500 years. Nowhere is this truer than in Guatemala, where the indigenous Mayan populations have faced an ongoing attack. The expansion of the extractive industries in the years since the end of the internal armed conflict have sparked yet another offensive against indigenous people, and exposed the structural racism that remains in the country. 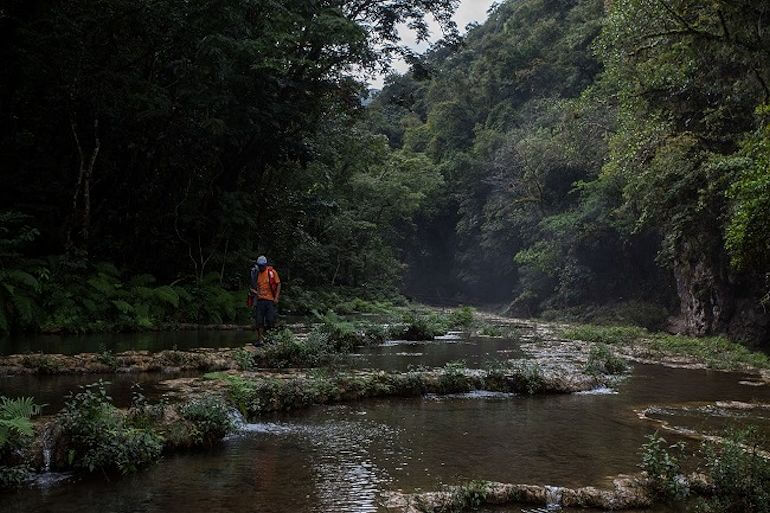 “There have been institutions that have been speaking poorly of us on the radio, on the TV, and the newspaper,” said Asig Pop. “They are calling us thieves, but we aren’t the thieves. We as indigenous peoples have the right to administer our lands.”

Fighting the Privatization of Sacred Sites

The promotion of tourism across Guatemala facilitates the dispossession of the land of indigenous communities. But movements to recuperate territory such as Semuc Champey have tried to gain back these sacred sites.

“For hundreds of years our ancestors took care of this sacred location,” said Asig Pop. “There our Grandmothers and Grandfathers would hold ceremonies asking the gran Lajpu for good harvests. But we were kept from entering because of the 30 Quetzal fee.”

The community members have since been able to return to the site without having to pay. This has occurred in part thanks to the recuperation of the site on February 8, which shifted the management of the entrance into the hands of the community.

Semuc Champey is an example of the continuation of the privatization of sacred sites by the Guatemalan state and by transnational companies as part of the expansion of tourism across the country. Sites such as Tikal, Iximché in Chimaltenango, and Semuc Champey continue to hold significant spiritual importance within the Mayan cosmovision, where spiritual leaders still hold ceremonies, but are now restricted by fees, which keeps many from visiting the sacred sites due to the entrance cost.

This frustration has driven the movement to recuperate sacred sites, and will likely lead to future conflicts.

“The transnational companies are coming and displacing us from our sacred sites,” said one Ixil spiritual guide in the highland community of Nebaj during a ceremony inaugurating the Mayan New Year on February 21. “But we must and will continue to protect our sacred sites.”

Jeff Abbott is an independent journalist currently based out of Guatemala. He has covered human rights and social moments in Central America and Mexico. His work has appeared at VICE News, Truthout, and the North American Congress on Latin America. Follow him on twitter @palabrasdeabajo

This article was originally published at Upside Down World. It has been re-published at IC with permission from the author.