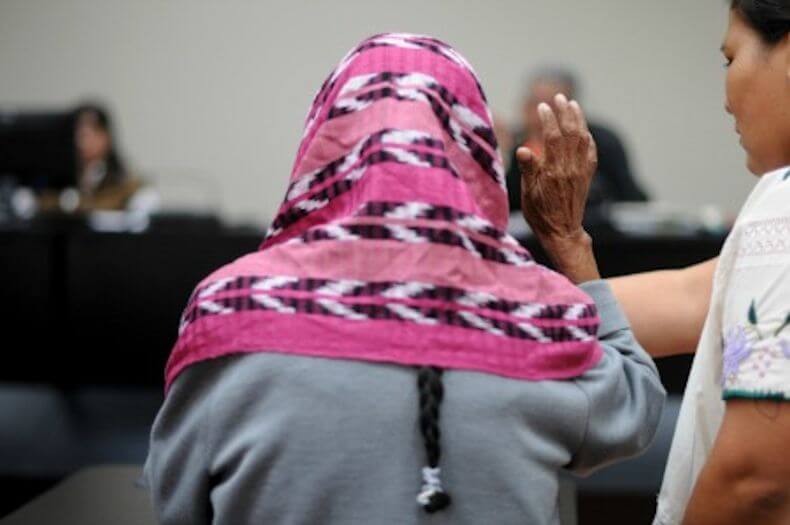 Guatemala’s recent history bears the mark of a 36 year long, painful internal armed conflict, during which the State systematically violated the rights of the Mayan population.

According to the Report of the Commission for the Historical Clarification of Human Rights Violations in Guatemala, 83.3 percent of the human rights violations were committed against them.

Indigenous women have particularly suffered from the conflict. They have been victims of rape, abuse and sexual slavery.

Women’s organizations have played an important role in spreading information on the legal actions and in collecting and documenting the testimonies of several of them, who are now over 50 and suffer from severe PTSD.

The three organizations play different roles in promoting public debate on the cases: MTM is in charge of the judicial strategy, ECAP offers psychosocial support to the victims and UNAMG works on the public stance of the plaintiffs.

Sepur Zarco: a case that may set a precedent

Sepur Zarco is a community located on the border between the departments of Alta Verapaz and Izabal, in northern Guatemala. Six military detachments settled in this region during the internal armed conflict for the purpose of extermination and torture.

In 1982, the army captured the men of the Mayan community and their widows underwent domestic slavery, sexual violence and sexual slavery.

The abuses were committed by the army of Guatemala for six consecutive months, during which women did shifts every 3 days to cook and clean and wash military uniforms, and were individually and collectively raped over and over again.

Some of them described how they were injected and forced to take birth control medicines to prevent pregnancies.

After setting up a Tribunal of Conscience Against Sexual Violence in 2010, indigenous women decided to take the case to the formal justice system and filed a lawsuit in 2011.

The case is the first to reach the Guatemalan national courts for crimes of international significance against women.

As for its typification and in accordance with the Historical Clarification Commission, rape during the internal armed conflict was used in a widespread, massive and systematic way as part of the counterinsurgency policy of the State.

Therefore, sexual violence is a crime against humanity, a war crime and a constituent element of genocide.

In the post-conflict phase, though, sexual violence as a crime against humanity is still invisible.

That is why it is expected that the evidence and the proceedings will arouse national and international interest and allow for a new phase of discussion and historical reparation for fierce racism in the country.

The public trial will be held in Guatemala City on February 1, 2016. There are two defendants.

Guatemalan women’s organizations call on all stakeholders to make a positive contribution to the trial, to attend public hearings and duly oversee the proceedings.

Article first published in Spanish by Servindi. Translated by Open Democracy and republished under a Creative Commons License.