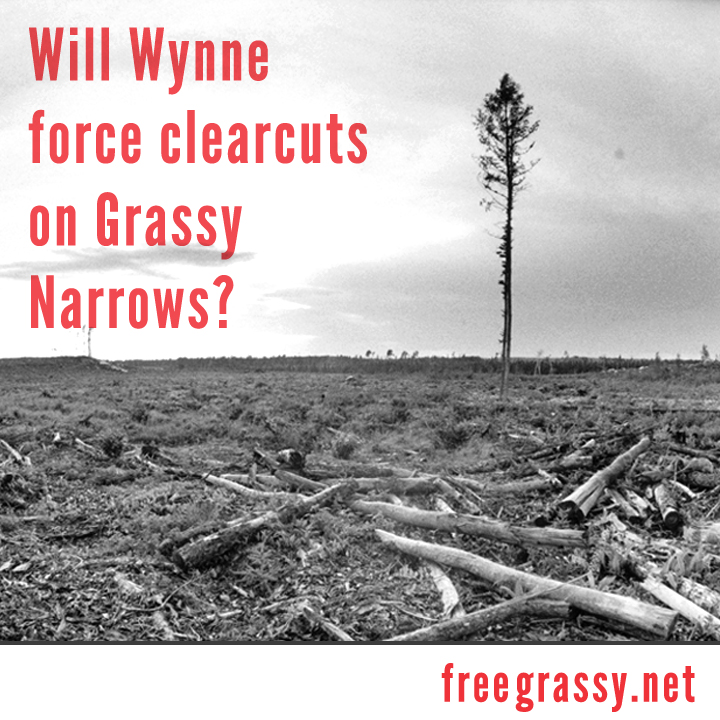 Another decade of clearcut logging in Grassy Narrows approved

Grassy Narrows, Ontario – On December 23 the Wynne government approved plans for another decade of clearcut logging in Grassy Narrows Territory against the will of this Indigenous community. The decision has ruined Christmas in a community already struggling with the long term health impacts of mercury poisoning. The Whiskey Jack Forest Management Plan 2012-2022 plans for dozens of large clearcuts on Grassy Narrows Territory, some nearly the size of pre-amalgamation Toronto.

“Premier Wynne, it is within your power to ensure that the mistakes of the past are not repeated at the expense of another generation of Grassy Narrows children,” said Grassy Narrows Chief Simon Fobister. “I call on you to intervene to repeal this hurtful plan and to ensure that never again will Ontario attempt to force decisions on our people and our lands.”

Speak out against the plan here.

The plan sets out a schedule to clearcut much of what little mature forest remains on Grassy Narrows Territory after decades of large scale industrial logging. Clearcut logging elevates mercury levels in fish – deepening the tragedy caused when 20,000 lbs of mercury poison were dumped into Grassy Narrows’ river by a paper mill upstream in the 1960′s.

This logging will further erode the Aboriginal and Treaty Rights of the community which depends on the forest to sustain their families and to practice their culture through fishing, hunting, trapping, medicine harvesting, ceremony and healing for all generations.

“Ontario has ignored our voices, and has added insult to injury by delivering this bitter blow during Christmas,” said Joseph Fobister. “My heart sinks because I know that clearcut logging has devastating consequences for our people. We cannot allow this.”

Premier Wynne visited Grassy Narrows in the summer of 2012 as Minister of Aboriginal Affairs, saying that she wanted to rebuild Ontario’s relationship with Grassy Narrows to “get it right.” Instead Ontario has unilaterally pursued this clear-cut logging plan against the will of the community and without consent

We were not properly consulted and we do not accept any application of this plan to our traditional lands. The Chief and Council along with community Elders stand united on this issue and are determined to protect the community’s way of life; Aboriginal and Treaty Rights.

The Supreme Court of Canada will hear Grassy Narrows’ case against Ontario in May, with a decision following by six months or more. The legal action argues that Ontario does not have the right to unilaterally permit logging on Grassy Narrows land due to promises made by Canada in Treaty 3.
The new logging plan takes effect in April.

Grassy Narrows is the site of the longest running native logging blockade in Canadian history – an ongoing grassroots action which recently celebrated its 11th anniversary. Grassy Narrows youth, elders, women, and land-users put their bodies on the line to stop logging trucks from passing.