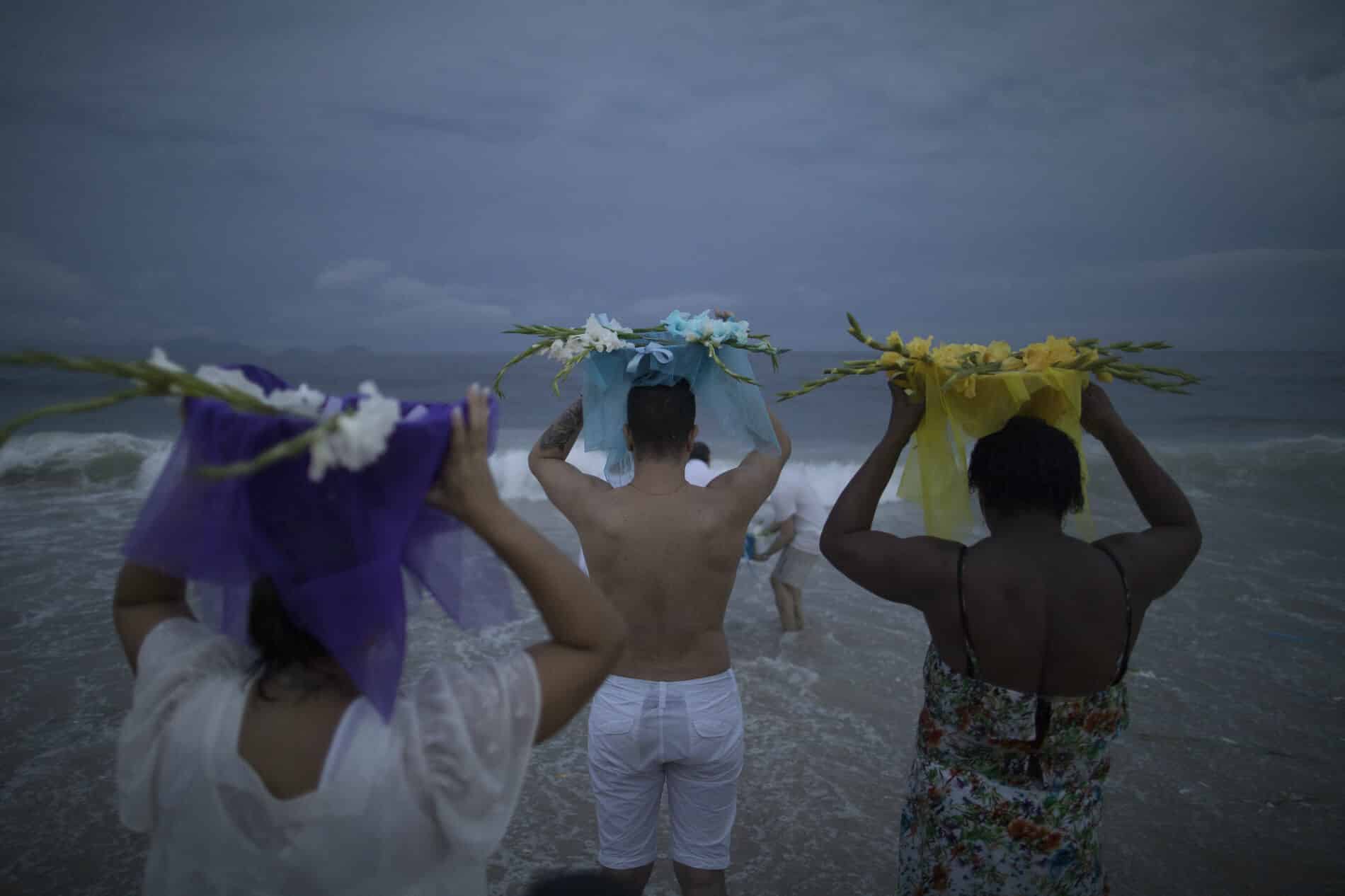 In Rio de Janeiro, practitioners of the Afro-Brazilian faiths Candomble and Umbanda are increasingly under attack by evangelical crusaders. AP Photo/Leo Correa
Support our journalism. Become a Patron!

The expression “evangelical drug trafficker” may sound incongruous, but in the Brazilian city of Rio de Janeiro, it’s widespread.

Charismatic Christianity is on the rise across Brazil. Slightly less than a third of all Brazilians identify as evangelical, up from 5% in the 1960s. The 2020 national census is expected to show significantly more growth.

In Rio, where the evangelical population increased 30% in the first decade of this century, even some of the most notorious drug dealers claim to be spreading the gospel.

I study violence in Latin America, and I’ve observed a sharp increase in reports of religiously motivated crimes in Rio de Janeiro since 2016, in particular attacks on “terreiros” – the temples of the Candomblé and Umbanda faiths.

According to Brazil’s Commission to Combat Religious Intolerance, over 100 Afro-Brazilian religious facilities nationwide were attacked by drug trafficking groups in 2019, an increase on previous years. A national emergency hotline created to report such attacks finds that 60% of incidents reported between 2011 and 2017 occurred in Rio de Janeiro.

Persecution of these Afro-Brazilian religions, whose adherents are largely poor black Brazilians, has been around since at least the 19th century.

But the current wave of religious bigotry is more personal, and more violent, than in the past. As the Washington Post recently reported, Afro-Brazilian priests are being harassed and murdered for their faith. Candomblé and Umbanda practitioners fear leaving their homes. Terreiros have closed due to death threats.

Rio’s Commission to Combat Religious Intolerance, a group created in 2008 by religious minorities, reported about 200 such incidents in the city between January and September 2019 – up from 92 in all last year.

Evangelicalism on the rise

The increase in religious hate crimes coincides with the growing political and cultural clout of evangelicals in Brazil. Evangelical lawmakers currently hold 195 of 513 seats in Brazil’s lower house of Congress, giving them the power to shape the national debate on abortion, religion in schools, gay marriage and other social issues.

Many Brazilian Protestants attend mainstream services, and are horrified by rising discrimination against those who practice other faiths.

But the fastest-growing denominations in Brazil are the harder-line Pentecostals and Neopentecostal churches – including the wildly successful Assembly of God and the Universal Church of the Kingdom of God.

Both spread what’s called the prosperity doctrine, promising personal salvation and financial success to people who trust God, work hard and cut out all alcohol, gambling and other vices.

For many poor people in the Rio’s hardscrabble “favela” neighborhoods, this is an appealing offer. 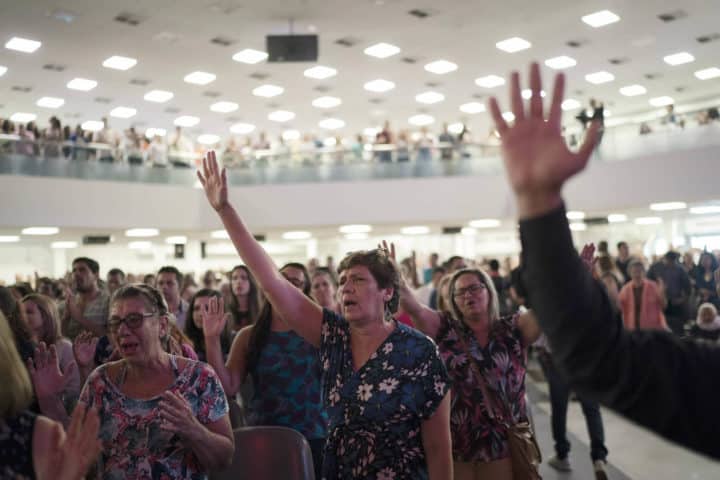 As ever more Brazilians convert to evangelicalism, traditional religions there are losing members. Between 2000 and 2010, when the latest national census was taken, the number of Catholics in Brazil dropped 9%. Followers of the Afro-Brazilian religions Candomblé and Umbanda declined 23%.

Some evangelical leaders who preach the prosperity doctrine also see these Afro-Brazilian religions as dangerously un-Christian, even evil.

Edir Macedo, the multi-millionaire bishop of Brazil’s Universal Church of the Kingdom of God, wrote in his 1997 book “Orixás, Caboclos and False Gods or Demons” that Afro-Brazilian religions “seek to keep us from God. They are enemies of Him and the human race.”

“This struggle with Satan is necessary…to eternal salvation,” he added.

The book sold 3 million copies before it was banned by federal authorities in 2005. But Macedo still peddles his message to his estimated 5.2 million followers at 13,000 affiliated churches.

For preachers espousing a binary spiritual worldview, “good” Christians must wage holy war against “evil” practitioners of Candomblé and Umbanda.

Though black commentators point out that this theological interpretation is just thinly veiled religious discrimination, some parishioners are heeding the call to “cleanse” the world of Satan’s work.

That includes a handful of drug kingpins, who prohibit adherents of Afro-Brazilian religions from practicing their faith in gang-controlled neighborhoods. Residents caught wearing the religious garb of Candomblé and Umbanda may be expelled from the community. 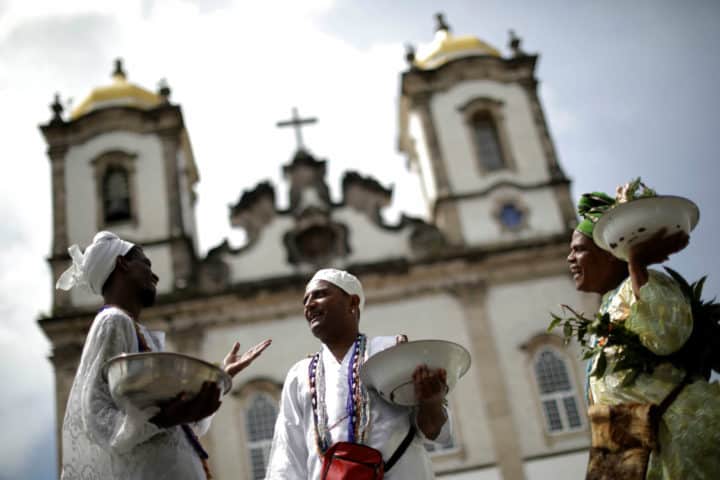 In some gang-controlled parts of Rio, just wearing the religious garb of Candomblé or Umbanda could lead to expulsion. Reuters/Ueslei Marcelino

The government is only nominally in control of most public prisons in Brazil. In practice, they are essentially governed by one of two competing Brazilian drug trafficking organizations, which run their trafficking and racketeering businesses there and recruit their rank and file from behind bars.

Faith groups, too, have a long tradition in Brazil’s prisons. Previously, these prison ministries were predominantly Catholic. Today, however, 80 of the 100 faith-based organizations subcontracted to run social programs in prisons are evangelical churches.

As a result, charismatic Christianity has spread quickly through the criminal justice system.

Jailhouse conversions are common. Inmates who adopt evangelicalism are frequently housed in separate prison wings that stand out for their order and cleanliness. Some have even established their own ministries inside jail. Developing positive relationships with local Rio pastors while in jail can tighten a gang’s grip on power once released.

Over the past century, the area has seen waves of migration from Brazil’s north and northeast, where Afro-Brazilian religions have traditionally prospered. Baixada Fluminense has at least 253 Candomblé and Umbanda terreiros, more than any other municipality in the state.

Described by locals as a “Wild West,” the area is home to famously corrupt public officials who have long worked with militia and mafia groups to intimidate their rivals. This patronage relationship allows drug traffickers, evangelical or otherwise, to operate with impunity.

More than a third of violent attacks on Afro-Brazilian temples this year occurred in the Baixada Fluminese.

The Brazilian government has started taking notice. In November 2019 the federal public prosecutor’s office urged Rio de Janeiro authorities to compensate victims of religious intolerance both “materially and symbolically,” particularly in Baixada Fluminense. But proposals on how, concretely, to support them remain on paper only.

Brazilian faith communities, in contrast, are actively fighting back against rising religious discrimination in Brazil. In September, an estimated 100,000 people joined Rio’s annual walk for religious freedom, one of the largest gatherings since the procession’s inception 12 years ago.

There may be conflict in Brazil’s religious diversity, but there is unity, too.

This article was originally published by The Conversation. It has been re-published at IC under a Creative Commons License.