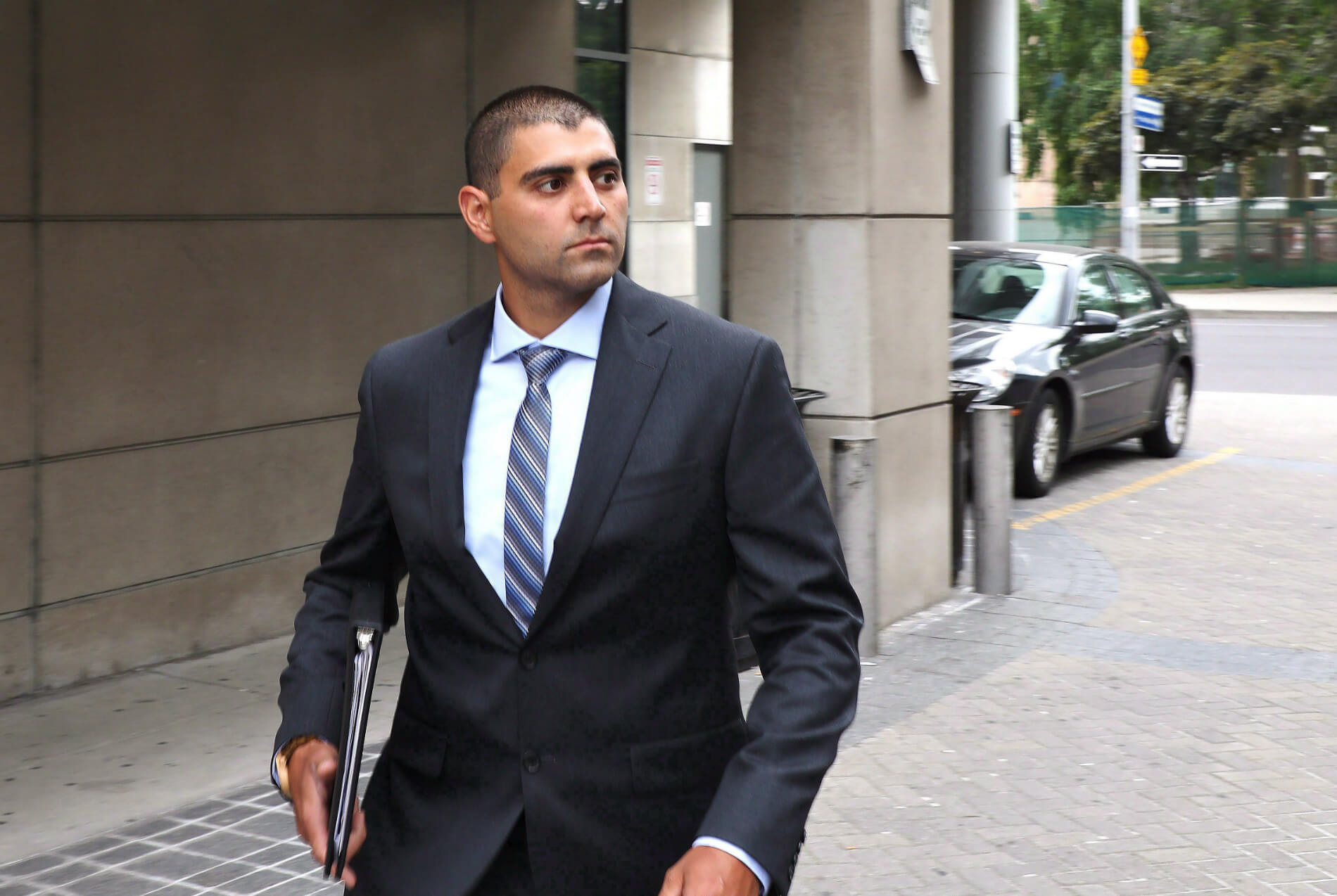 Erasing race but not racism in the Peter Khill trial

Hamilton resident, Peter Khill, 28, admitted he shot Jon Styres but said he fired in self-defence, believing Styres was about to shoot him. A jury acquitted him last week. THE CANADIAN PRESS/Colin Perkel
Support our journalism. Become a Patron!

On June 27, 2018, a jury found Peter Khill not guilty of second-degree murder for the Feb. 4, 2016 killing of Jonathan Styres, an Indigenous father of two from Ohsweken, Ont., from the Six Nations.

I have a unique perspective on this case. Not only as a critical race scholar who examines historical, social and political issues within criminal justice, mental health and immigration systems, but also as a potential juror who was summoned as “Juror No. 4018” to serve as one of the first two triers in the proceedings.

Styres, 29, was killed after being shot twice by Peter Khill with a shotgun in the driveway of Khill’s home. According to reports, Styres was allegedly breaking into Khill’s truck.

Khill, a former reservist, loaded a shotgun with a turkey choke (a pellet-focusing device for the muzzle) and shot downward at the unarmed Styres, within two metres, twice, without a warning shot.

During the trial, it was reasonable to ask if the shooter could see his target. But not one question could be asked of what and who he saw in terms of identity. It could not be asked what he thought in that moment. He was not asked to examine how his perceptions might have influenced how he responded.

The case comes in the wake of recent controversial acquittals in the killings of both Colten Boushie and Tina Fontaine earlier this year.

Those two cases garnered widespread attention to the systemic colonial continuities and systemic racism in Canada and within the Canadian criminal justice system.

How the jury was selected

Media reporting on the Khill trial suggested it addressed recent criticisms of systemic racism within the criminal justice system. The jury was reported to have been “screened for potential racism.”

Some news outlets like the Toronto Star and the Hamilton Spectator reported that racial bias within the jury was addressed through screening and that “race did not play a role in the shooting.” A CBC news story indicated that jurors were questioned for racial bias and this was a significant improvement on previous proceedings in other cases. 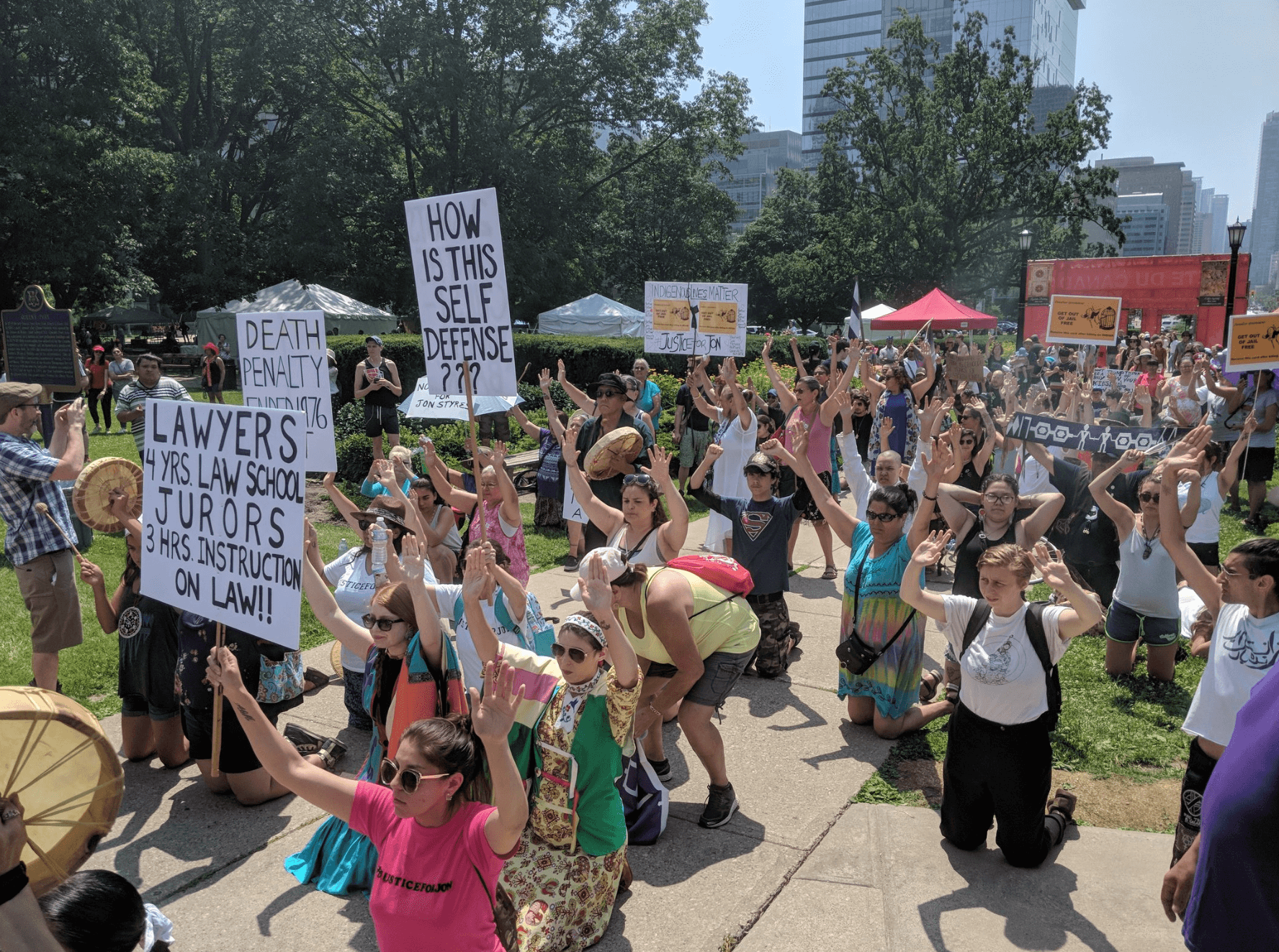 As a trier, I served a unique function in the jury selection process. Two people are randomly selected by the judge to confer on whether a person is acceptable or unacceptable as a potential juror. The decision is mainly based on a response to one question, crafted by the judge and previously approved by the legal counsel of both the defense and the prosecution.

The first two triers do not go on to become jurors. The judge patiently described this process in detail at each stage. He repeated on more than one occasion that this selection process and jury system in Canada was the best in the world.

The one and only question posed was: “Would your ability to judge the evidence in this case without bias, prejudice or partiality, be affected by the fact that the deceased victim is an Indigenous person and the person charged with this crime is a white person?” 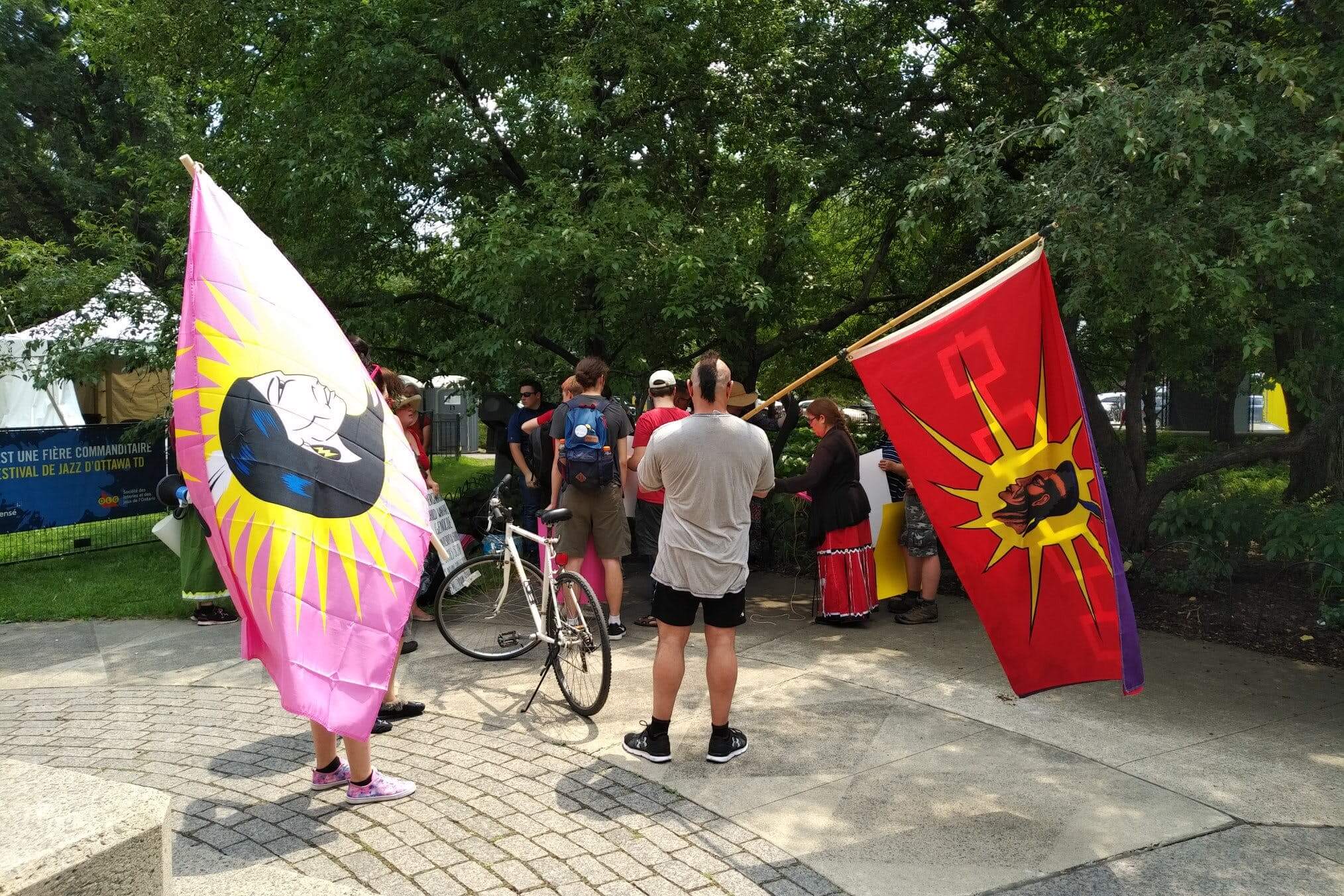 A #JusticeForJon demonstration in Ottawa on July 1, 2018. Brent Patterson

Possible reasons include: Undue hardship, whether financial or otherwise, planned vacations or leaves which would affect their ability to serve. On many occasions, potential jurors were excused from service because their situation did not allow for financial security during their service.

Therefore, the process already systematically precludes a number of people from having an equitable chance to serve on the jury.

Once the triers deem a juror acceptable, the potential juror is asked by the judge to look the accused in the eye. At that point the legal counsel from both sides weigh in to say whether they are content with or challenge the juror’s acceptance. This is done solely based on appearances (and possibly profession).

Some people were challenged. No reasons were given and the answer to the question (yes or no) did not prevent or allow a challenge for cause.

Only potential jurors were asked the question. As a trier, I never had to answer the question: No one asked me.

If I could ask one question of the judge and of our system, I would ask: Does this process make it fair for someone who has experienced racism or who is aware of racism to participate?

In other words, when the criteria is impartiality with regards to racism, the process disallows (or at least strongly discourages) jurors who recognize the realities and facts of racism.

These potential jurors are less likely to make it through this court’s “challenge for cause.”

The question also limits the jury’s capacity to perceive and understand all of the relevant dynamics in the case.

The question implies that acknowledging people’s social identities, and recognizing the relations that exist between social groups, is a form of contamination or bias.

It was reported that in the end, it’s unclear if any Indigenous jury members were selected and “at least one non-white person” was on the jury. 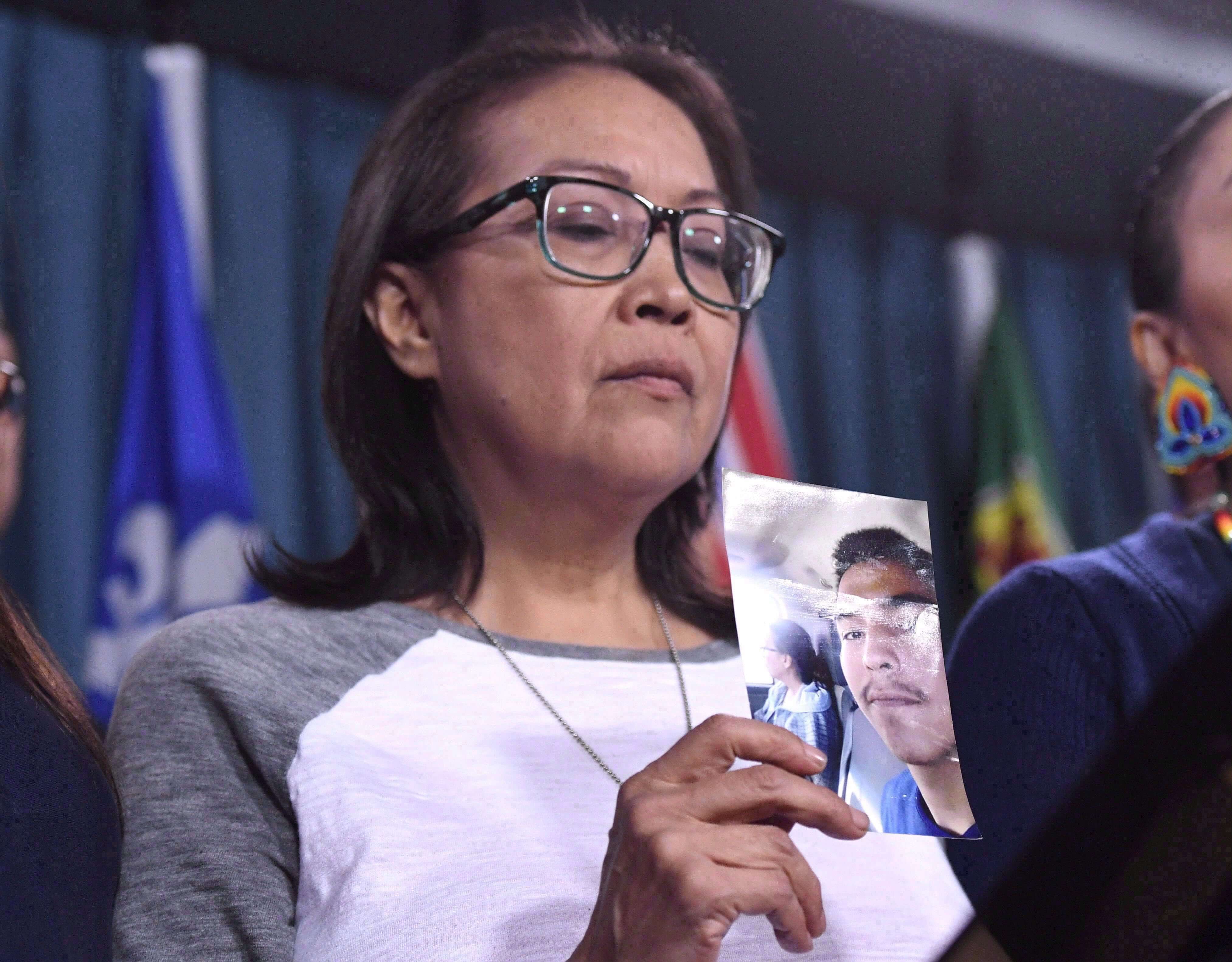 Debbie Baptiste, mother of Colten Boushie, holds a photo of her son, a young Indigenous man who was shot and killed on a Saskatchewan farm. Baptiste says that racism is on full blast and that there is no justice in the courtrooms. THE CANADIAN PRESS/Justin Tang

The judge repeatedly mentioned impartiality and bias. But he left triers and legal counsel the option to select jurors on the basis of an answer to one race-erasing question.

The question itself as well as the race-erasing ideas conveyed by the judge sent a message to the people in the court that identities should not be spoken of, nor be considered.

How can justice be served without acknowledging that the deaths of Indigenous people were already historically rendered permissible for the protection of stolen, colonized lands?

Does this practice address systemic bias? It does not appear to do so and instead, allows the process to carry the unnamed influences of racism while proclaiming impartiality.

Research on implicit and unconscious bias presumes that racism is created by or bound to individually held prejudice or bias.

A response to this conceptualisation of racism is to train or educate people about biases and prejudices. The hope is that people will learn to acknowledge their biases and eliminate them or at least somehow suspend them.

However, many understood this method as an ineffective response to systemic forms of racism. In fact, research suggests that this training can have the reverse effect.

It is however, the most easily executed, as was seen in response to the recent incident of police removing Black men from a Starbucks coffee shop in Philadelphia.

Systemic racism is a fact

This way of looking at racism as an individual and unconscious bias does not acknowledge that racism does not need individuals who carry racist beliefs for systemic racism to be advanced. 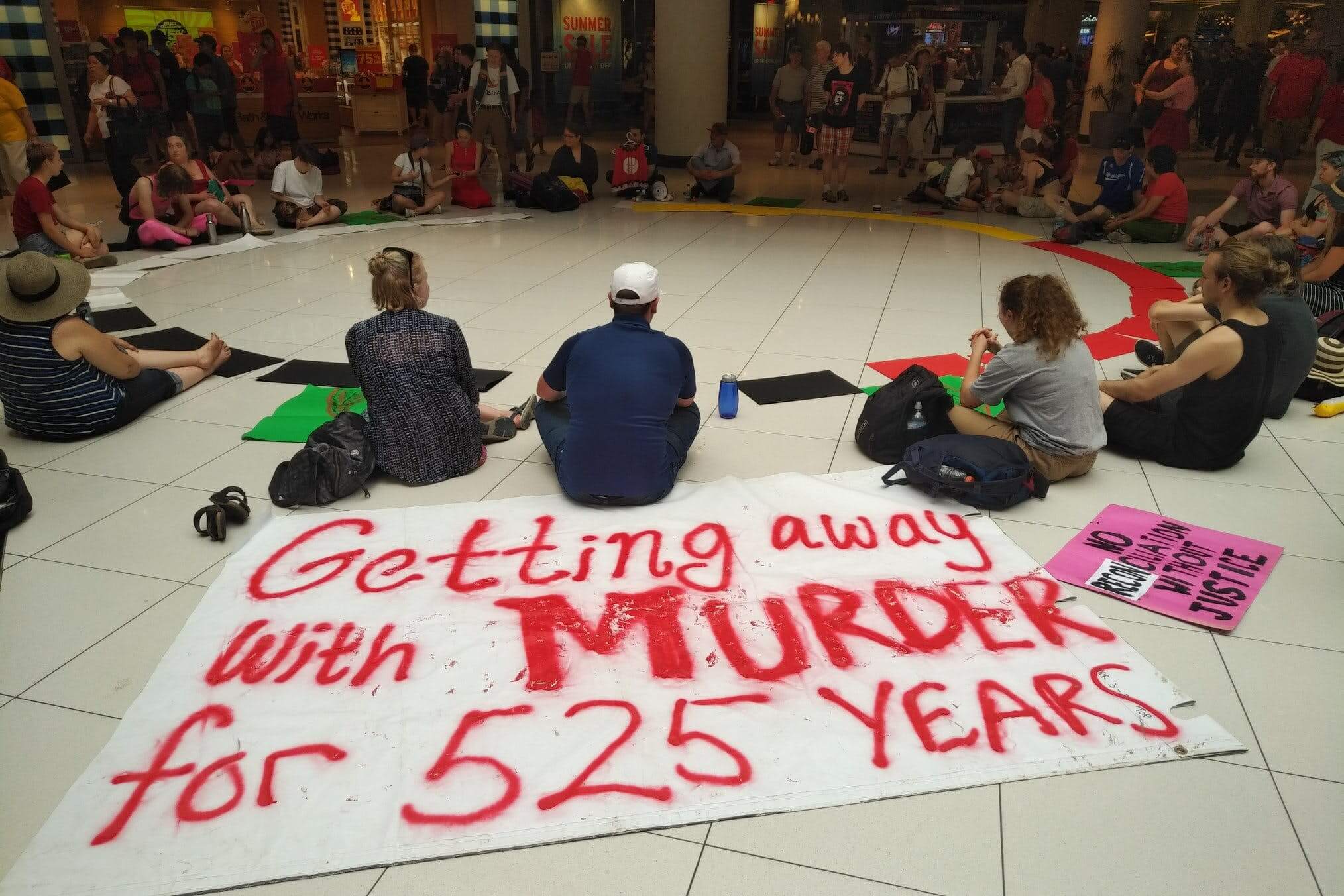 A solidarity gathering and medicine circle for Jon Styres and the Six Nations at the Rideau Centre shopping mall in Ottawa, Ont. Brent Patterson

Part of how systemic racism is advanced is through the practice of claiming that racism is not real and that racism is not bound to historical, social and political inequities that disproportionately treat Black and Indigenous people and lives as if they do not matter.

Systemic racism is protected when impartiality is based on ideas that these injustices do not exist and that the disproportionate criminalization, incarceration, arrest, apprehension of children and pathologization of Black, Indigenous and people of colour is not a fact.

Unfortunately, it is a fact and has been in Hamilton, Ont. for many years.

If the question asked of potential jurors was to address implicit or unconscious bias, it did not work.

What it in fact produced was a mostly male, mostly white jury who was told to deny race and racism as a fact of the case and systemically eliminate these contexts from factual analysis. This is another example of a broken system, of the issues that arise when that problem is ineffectually addressed and of justice denied.

This article was originally published by our media partner, The Conversation. It has been republished on IC under a Creative Commons License.