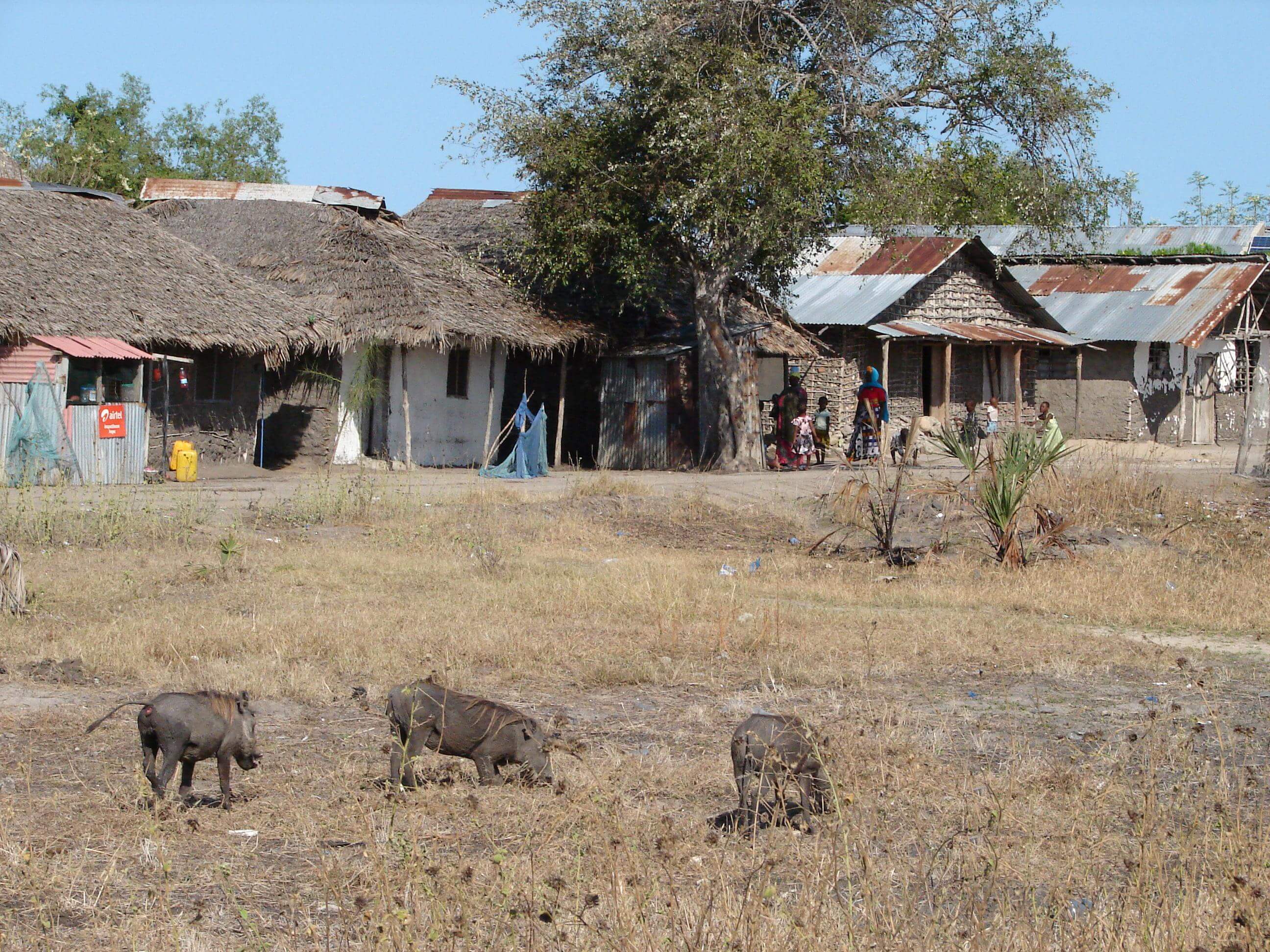 Erasing a Community in the Name of Conservation: Uvinje Village and Saadani National Park

It may seem strange that the impending eviction of the people of the coastal fishing community of Uvinje is attracting outside attention. After all, the agency evicting them—the Tanzania National Parks Authority (TANAPA)—is part of a powerful state apparatus built around international conservation tourism, an apparatus that expands its network of parks and game reserves all the time; Uvinje, on the other hand, is a small community of 21 households and a total population of just 130 people.

Oldest Saadani Game Reserve map found so far. Uvinje and its territory are mistakenly designated as “Mbuyuni Village land South of Mligaji River” territory—Buyuni village is located north of Mligaji River, and Uvinje to the south. In any case, the map is clear that the Game Reserve (no. 3 on the map) does not include the village land. The map is presumed to be the original SGR map which was presented to Uvinje and Saadani elders involved in the establishment of the reserve. Source Map: 1996 Report on Research Commissioned by the Wildlife Division to the University of Dar Es Salaam

There are two main reasons the situation has attracted the attention of Tanzanian media[1] and that of international organizations and coalitions such as the consortium of Indigenous Peoples’ and Community Conserved Territories and Areas (ICCA).The first of these reasons is the way the planned eviction has come about: not by TANAPA following the procedures that are laid down for it to acquire land from villages for national parks—procedures that are stacked in its favour anyway—but by its taking advantage of the poor record keeping that ignores original boundaries and to create its own new map of the Game Reserve with the boundaries in a different location to ensure that Uvinje’s land would be inside the new national park.

In the 1960s, Saadani village, including its sub-village Uvinje, invited the Wildlife Division to help them conserve the wildlife being indiscriminately killed in their area by outsiders. A partnership emerged and Saadani Game Reserve was officially gazetted in 1974 with the full support of Saadani village, which willingly gave up more than 50% of its land for the Reserve. In the late 1990s TANAPA came in to “upgrade” the Game Reserve to a national park and a process of consultation ensued. The National Park was to be larger than the original Reserve, and additional land was added to the north, west and southern sides of the Reserve.

However, never in the course of these consultations or in the official documentation on the creation of the Park was there any mention of annexing further land from the eastern side of the Reserve which was comprised of the coastal strip of Saadani village’s remaining territory. On the contrary, District authorities secured a written commitment from TANAPA to return to the village a 1.5 km long area along the Reserve’s eastern boundary adjacent to the narrow strip of land comprising the village centre. Not only was this commitment never honoured, but somehow the original boundaries instead shifted to include the totality of Uvinje and Porokanya, Saadani’s two main coastal sub-villages, as well as part of the Saadani village centre. District and other authorities gave their approval, unaware that original boundaries of the Reserve at Saadani village had changed. Once village leaders became aware that TANAPA had redrawn the boundaries, they sent numerous queries and protests to higher authorities, all of which were ignored. Saadani National Park, with TANAPA’s preferred boundaries, was gazetted by Parliament in 2005.

Three different independent research reports confirm what elders and elected leaders of Uvinje and Saadani have been claiming all along: that they have never been within the Reserve or the Park. Presumably, under Tanzanian law TANAPA has no authority to evict people from a national park if they are not actually in a national park.

EVICTIONS AND THE PUBLIC INTEREST

Another discrepancy relates to the number of families in Uvinje who have accepted compensation from TANAPA and the number who remain in the village. The Deputy Minister of Natural Resources and Tourism seems to have been told that only four families have refused compensation. According to leaders of Uvinje and documentary evidence, however, TANAPA’s most recent compensation list, one of at least three different compensation lists, is made up of people who do not live there, and omits everyone who does. As shown in an annex to the ICCA’s open letter to President Kikwete, Uvinje has an adult population of sixty, none of whom seem to have any interest in leaving their homes.

Overlay of various maps of the Saadani Game Reserve. The basic two differences between the SGR maps from the University of Dar es Salaam and the 2013 doctoral research are: (1) the exact location of the reserve’s eastern boundary (while the U. Dar es Salaam research used the road between Mkwaja village and Wami river as the boundary line, the doctoral research set the boundary based on the location of 2 original game reserve beacons (~500m to the West of the road)) and; (2) the southern portion of the reserve (U of Dar took Wami River as the southern boundary, while in the doctoral research the boundary tries to follow the land features included in the original gazette notice of the Reserve). Neither one of the two maps developed through independent research include the coastal sub-village areas of Uvinje and Porokanya as part of the original area comprising the reserve.

Independent research has shown that the original agreement leading to the creation of Saadani Game Reserve resulted in three decades of successful collaboration for conservation. This collaboration resulted in effective partnerships to address poaching, community-based lodging for tourists and increased grassroots awareness and engagement in conservation, as well as enabling a welcoming reception to TANAPA in the initial stages of establishing the park.

The people of Uvinje, despite not having shared in any of the benefits from conservation since the establishment of the Park, have remained stewards of their traditional lands and the wildlife through their collective disapproval of poaching, their decision to stop salt-mining, formerly their main source of income, because of its detrimental impacts on conservation, and their investment in a small eco-lodge. Yet, TANAPA has refused to allow the eco-lodge to move forward, and has instead issued its own call for expressions of interest for a luxury tented camp in Uvinje’s territory to cater international tourism [TANAPA: INVITATION FOR INVESTORS].

Tanzanian law allows for TANAPA to acquire village land when they can show that it is in the public interest. Herein lies the second reason this case has attracted so much attention: this history raises the inevitable question of whether the public interest would be better served by allowing Saadani village to be meaningfully connected to conservation efforts, and residents of its Uvinje sub-village to continue living in their homes and earning their conservation-friendly livelihoods.

Precisely when it was that senior government officials became aware of the way in which TANAPA has laid claim to Uvinje’s land is not clear. What is clear is that the increasing media attention and efforts from organizations concerned with human rights have triggered a series of denials on the part of various authorities, as they assign blame for instance to “a foreigner who makes the villagers stubborn” despite the fact that the Uvinje’s leaders have been seeking redress since 2001.

However, now the shifting of the boundaries is well documented and has become public knowledge. Organizations such as Minority Rights Group International (MRG), a leading international human rights organization and the Indigenous Peoples’ and Community Conserved Territories and Areas (ICCA) a consortium with members from over 50 countries see this as a question of human rights. How the Government of Tanzania now responds will tell us how President Kikwete sees the situation. The people of Uvinje see it quite simply: it is a trust betrayed, a complete disregard of their roots, identity, and stewardship of nature, and ultimately the loss of their home, the annihilation of their existence.

This article contains material from a previous article by Alejandra Orozco‐Quintero, published at The Ecologist on Oct. 3 2014