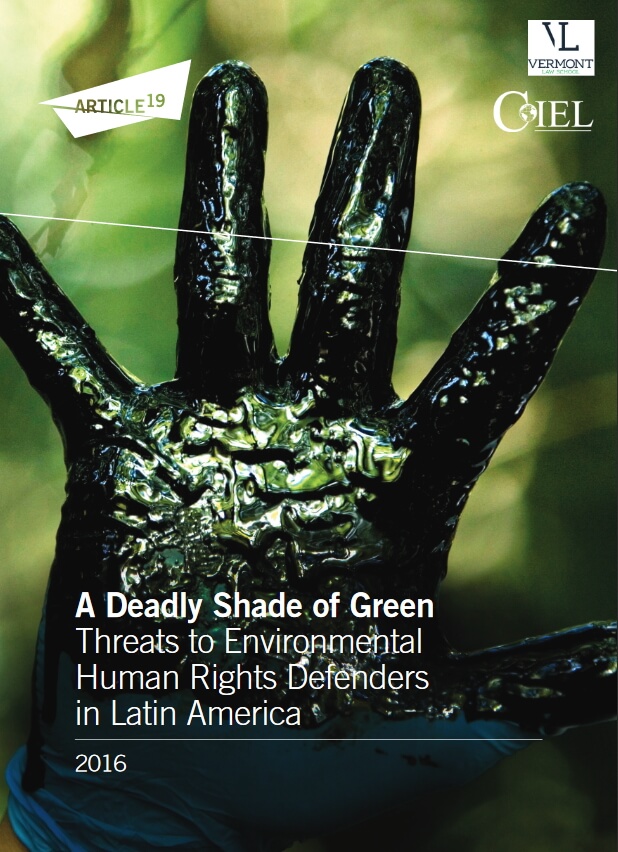 Latin America is, by far, the most dangerous region in the world for environmental human rights defenders (EHRDs). The murder of campaigner Berta Cáceres in March reverberated worldwide, but a new report by ARTICLE 19, CIEL, and Vermont Law School, A Deadly Shade of Green, reveals this to be only the tip of the iceberg, documenting an atmosphere of violence and physical threats, as well as surveillance, spurious charges, and arbitrary detention, across the region.

“Those with vested interests in the exploitation of land in Latin America employ an armoury of threats to silence dissenting voices, who speak out against business and state interests,” stated Thomas Hughes, Executive Director at ARTICLE 19. “Those who violate the rights of EHRDs often do so with impunity, with state apathy or even complicity, creating a climate of fear and self-censorship. The situation is dire: urgent action is needed to protect defenders, and the environment they fight to protect,” Hughes added.

The report calls for immediate action to end the harassment and murder of human rights defenders, and for accountability for those perpetrating attacks across the region. Resource extraction and development projects must begin only with meaningful, inclusive and participatory consent processes. EHRDs must be empowered with the means to defend their rights. The Regional Agreement on environmental democracy under negotiation in Latin America and the Caribbean must provide effective mechanisms to safeguard the rights of EHRDs.

The report is available in English and Spanish.