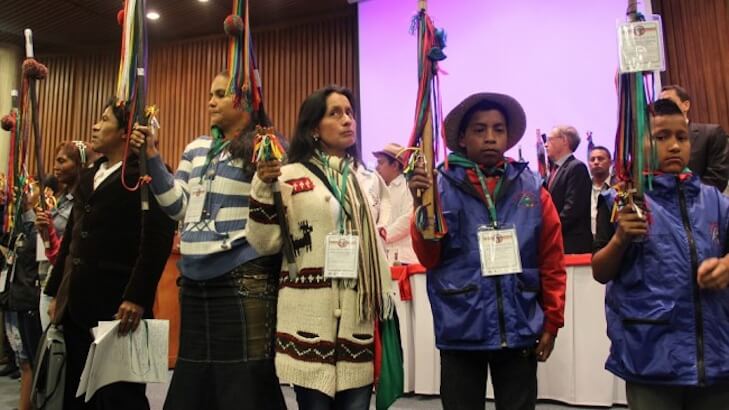 Count on us for peace, never for war

Colombian Indigenous Peoples believe in peace dialogue, in spite of continuous violence in their territories
Photo: www.onic.org
Support our journalism. Become a Patron!

While high profile teams of government officials and representatives of Colombia’s main leftist guerrilla group, the FARC, try to negotiate a peace deal in Havana, Indigenous Peoples continue to be killed in their territories. In the last week alone, four Indigenous persons have been shot dead and three more disappeared. Further facts are still under investigation.

It was under such dire circumstances that some 400 people gathered in Bogota last week to participate in the National Peace Forum. Organized by Colombia’s Indigenous Peoples, the aim of the peace forum was to present Indigenous perspectives on peace, to discuss ways of protecting Indigenous territories and to create dialogues with other sectors of Colombian society, including Afro-Colombians, farmers and intellectuals. 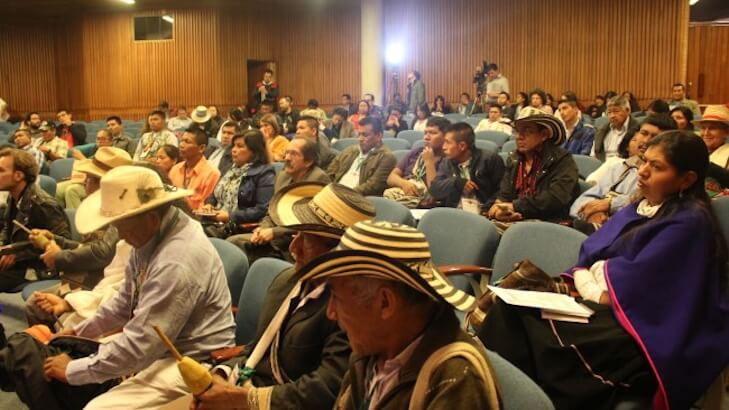 “We have been fighting for peace for 523 years, ever since the colonists arrived in our territories. Since then war has not stopped. Historically, we are people of peace and our strengths lie in the power of the Minga (collective decision making) and in the community”, affirms Luis Fernando Arias, President of the National Indigenous Organization of Colombia (ONIC).

Indigenous Peoples in Colombia have been working on proposals for peace long before the Santos Administration decided to initiate formal peace talks with the FARC, in 2012. Among their most famous institution of peace stands the “Indigenous Guard”, an ancestral body formed of children and adults ready to defend their territory and community through peaceful means. Armed only with a symbolic stick they make it clear that solutions cannot be found in weapons, but rather in mutual understanding and respect. “I carry the peace baton!”, is the name of a new campaign launched by Indigenous Peoples in Colombia last week. The aim of the campaign is to cultivate the vision underlying the peace baton among members of Colombian society.

The Colombian armed conflict is the longest lasting guerrilla conflict in South America; one that has caused tremendous bloodshed and violence. Indigenous Peoples are among those most affected by the war. Located in remote but hugely biodiverse areas, their territories have always been of great strategic interest to all actors involved in the conflict, be that illegal armed groups, narco-traffickers, the government or extractive businesses. At no fault of their own, their lands have become a battleground for a war that is not theirs in which they have declared themselves over and again as neutral actors. According to UN data, between 1997 and 2011 at least 106,562 Indigenous persons were forcefully displaced from their territories; about 10 % of the whole Indigenous population in Colombia. Roughly during the same time period, at least 1,190 Indigenous persons were killed, among those at least 500 political leaders. Of the 102 different Indigenous tribes on national territory, 35 are at risk of physical and cultural extinction. 1 In fact, analysts, such as former UN Special Rapporteur for Human Rights, Rodolfo Stavenhagen, have coined the situation in Colombia as a genocide or ethnocide waged against Indigenous Peoples.

And yet, native peoples in Colombia are convinced that the only solution to this conflict–that has its roots in social exclusion, that has transformed over the decades as it became entangled in the drug trade, the war on terrorism and mining–lies in dialogue. “Count on us for peace, never for war”, is the main slogan that accompanied the forum from the beginning to the end. In that sense Indigenous Peoples strongly support the peace talks with the FARC in Havana, but they also ask to open up formal peace dialogues with the ELN (the second largest Guerilla group) and to actively involve civil society and in particular Indigenous Peoples in the talks. “There can be no peace for the rest of the Colombians if you do not respect our territory, our autonomy, our cultural identity”, says Luis Fernando Arias (ONIC). “We have very concrete proposals on the topics under discussion and those need to be heard”, Carmen Ariza, the coordinator of the forum, told IC. Todd Howland, current UN High Commissioner for Human Rights and participant in the forum, confirms that Indigenous Peoples permanently develop natural processes and strategies of peace.

As a sign of their commitment to peace, representatives of the ONIC offered their ancestral territories (28 % of the Colombian land mass) as the place where a bilateral ceasefire should start. So far, only the FARC has agreed to a nationwide ceasefire and has put it into practice. Indigenous Peoples claim that the government also needs to show its goodwill and withdraw its armed troops. 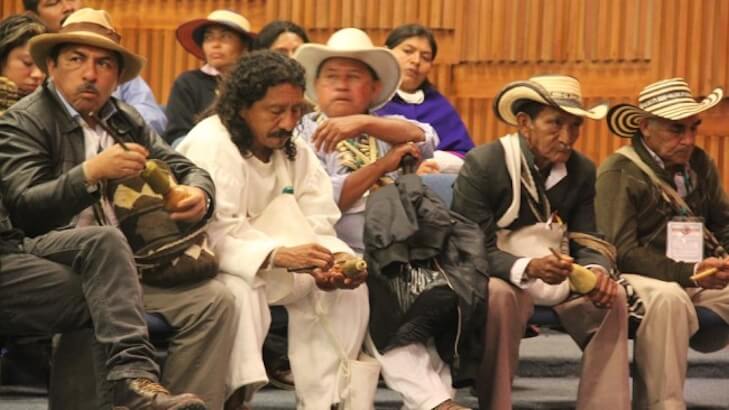 “Peace is inside of us, it is an attitude. They may decide in Havana to let go of the arms and weapons, but piece will not come out of Havana alone. Long-lasting peace requires inclusive institutions and guarantees for political participation which materialize in actions, ” affirms Juvenal Arrieta, the General Secretary of the ONIC.

Luis Evelis, an Indigenous Congressman pointed out that Colombian Indigenous Peoples have ample rights on paper, but few in practice. More Indigenous and Afro-Colombian children die in the Chocó region due to unfulfilled basic needs than due to the war. Neoliberal politics and an attempt to dismantle Indigenous rights during the last administrations, in particular when it comes to prior consultation with Indigenous Peoples in mining zones, are still massive threats to their integrity and their land rights. Another concern is violent neo-paramilitary groups that have appeared in their territories after the formal disarming of the AUC (illegal rightist self-defence groups) during the Uribe administration. These are serious problems that need to be faced and go beyond the talks in Havana.