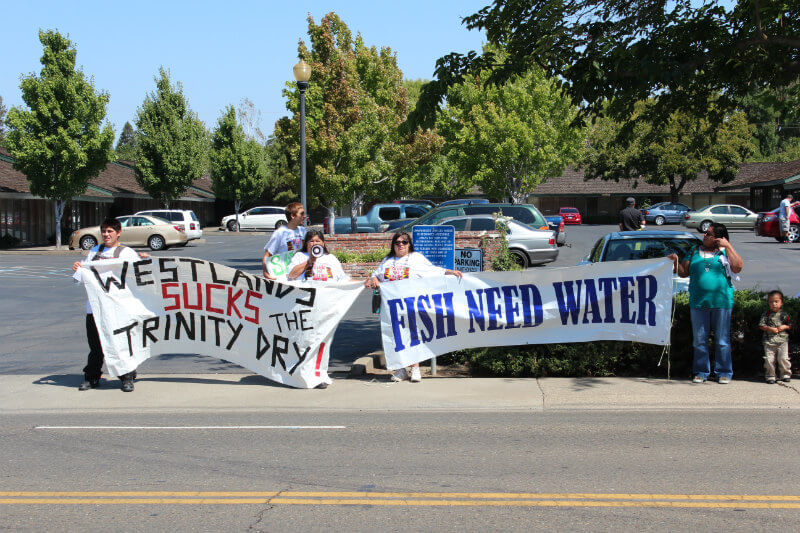 After a big protest by the Yurok, Karuk and Hoopa Valley Tribes and their supporters at the Bureau of Reclamation offices in Sacramento on August 19, Reclamation announced on Friday, August 22, that it would release additional water from Trinity Reservoir to supplement flows in the lower Klamath River to help protect the returning run of adult Chinook salmon from a devastating fish kill.

“We have determined that unprecedented conditions over the past few weeks in the lower Klamath River require us to take emergency measures to help reduce the potential for a large-scale fish die-off,” said Mid-Pacific Regional Director David Murillo in a news release and at a conference call with reporters. “This decision was made based on science and after consultation with Tribes, water and power users, federal and state fish regulatory agencies, and others.”

Hoopa Valley Tribal Chair Danielle Vigil-Masten hailed the decision, stating, “The Hoopa Tribe basically dropped everything they were working on to address this issue. The right thing for Secretary Jewell to do was to fulfill her trust responsibility to the Hoopa Valley and Yurok Tribes. This is an essential first step.”

Murillo said several recent factors prevalent in the lower Klamath River are the basis for the decision to provide emergency augmentation flows. These include flows and temperatures similar those that preceded the September 2002 fish kill when over 68,000 salmon perished after a disease infestation in warm and low water conditions; the presence of large numbers of fish, increasing the likelihood of the spread of disease; and very nutrient rich water with a high concentration of blue green algae.

Reclamation began releases from Lewiston Dam at 7 a.m. on Saturday, Aug. 23, from approximately 450 cubic feet per second to approximately 950 cfs to achieve a flow rate of 2,500 cfs in the lower Klamath River.

At 7 a.m. on Monday, Aug. 25, releases from Lewiston Dam were increased to approximately 2,450 cfs to achieve a flow rate of approximately 4,000 cfs in the lower Klamath River.

“We fully recognize that during this prolonged severe drought, every acre-foot of water is extremely valuable, and we are making every effort to conserve water released for fish health purposes to reduce hardships wherever possible,” added Murillo.

He said Reclamation will continue to work with NOAA Fisheries and other federal agencies to comply with applicable provisions of the Endangered Species Act (ESA) and the National Environmental Policy Act (NEPA). The public is urged to take all necessary precautions on or near the river while flows are high during this period.

There is no doubt that this decision would not have taken place without the big campaign by Klamath River Tribal activists and fishermen to stop a fish kill by urging the Bureau to release more water from Trinity Reservoir and Lewiston Dam. Congratulations go to everybody who made this possible!

Over 200 Tribal members and their allies from the Trinity and Klamath river watersheds held a four-hour protest at the Bureau of Reclamation offices in Sacramento on August 19 to urge them to release more water from upriver dams to stop a massive fish kill.

Members of the Yurok, Hoopa Valley and Karuk tribes, as well as leaders of the Winnemem Wintu Tribe, displayed an array of signs and banners with slogans including “Fish Need Water,” “Let The River Flow,” “Give Us Our Water, ” “Save The Salmon,” “Tribal Rights Are Non Negotiable,” “Release The Dam Water,” “Undam the Klamath – Free the Trinity,” “Fish Can’t Swim In Money,” and “Westlands Sucks The Trinity Dry.”

Members of the Klamath Justice Coalition made it clear that Tribal people and traditional fishermen would not give up until the Bureau of Reclamation released water to avert a massive fish kill.

“We’re fighting so my son, Sregon, doesn’t have to worry about water being in the river,” Frankie Joe Myers of the Yurok Tribe Watershed Restoration Program explained. “The Klamath fish kill of 2002 was devastating for our tribal communities and to the West Coast Fisheries. Previously, Tribes, fisheries scientists, and the Department of the Interior have worked together to avert fish kills by releasing preventative flows during drought years. We need these releases now more then ever.”

After the Bureau announced the increased water releases, Hoopa Valley Tribal Chair Vigil-Masten said,  “We look forward to walking straight and far with the Secretary on a new course that fulfills our rights and the rights of all North Coast communities to the fish and water we share with them.”

Dania Colegrove, organizer for Got Water? and Hoopa Valley Tribal Member, after hearing of the victory, said “Thank you, all of the people that fight for the water/fish and our ways of life!”

“The Karuk Tribal Council is extremely thrilled to announce the Bureau of Reclamation has announced they will be releasing additional water from the Trinity Reservoir to supplement flows in the Lower Klamath River. Hopefully the release of water is not too late, and it will prevent a major fish kill like we saw in 2002. Over 60,000 fall Chinook were lost in 2002, due to low flows and warm water temperatures which allowed disease and other trauma to negatively impact the fish.

The Tribal Council would like to personally thank all of the strong advocates for the fish and the rivers, including both the Trinity River and the Klamath River. Your dedication and commitment to grassroots activism coupled with strong science is what led to these vital releases of water. We are thankful for all of your prayers and we are grateful that your actions yielded positive results. During this time of ceremony and healing for the Tribe, our Tribal Members and communities should not have had to go to such great lengths to get results. We are glad that they are now able to relax for the moment and focus on strength and healing for our important ceremonies.”

Corporate agribusiness leaders, including Dan Nelson, Executive Director of the San Luis & Delta-Mendota Water Authority, weren’t happy with the release of water from Trinity Reservoir, claiming it was for “speculative fishery purposes,” in a press release entitled, “Reclamation announces it will dump water while thousands stand in line for food handouts.”

“Today, United States Bureau of Reclamation announced it will dump precious Central Valley Project water while the people of our valley suffer from well-documented and widely reported social and economic destruction as a result of government policies compounded by the drought,” said Nelson. “While over 2,000,000 acres of farm land throughout the Central Valley, which produces over half of the nation’s fruit, nuts and vegetables, continues to have a 0 percent water supply from the Central Valley Project, Reclamation has determined there is somehow enough water available to let it go down the Lower Klamath River in the hope it may help conditions for unthreatened salmon. This decision is wrong – both scientifically and morally.” ‘

It’s ironic that agribusiness interests, who have imposed a system of institutional poverty on farmworkers on the west side of the San Joaquin Valley for many decades, are claiming “social and economic destruction” to be the “result of government policies compounded by the drought.”

Hoopa Valley Tribak Vice Chair Wendy George expressed concern that Friday’s decision will trigger a new legal assault on the Trinity by Central Valley contractors. “I hope this time they will stand down and respect the law and our people,” she emphasized.

For more information about the Tuesday rally in Sacramento, go to: https://intercontinentalcry.org/tribal-members-rally-sacramento-stop-klamath-river-fish-kill-25355/