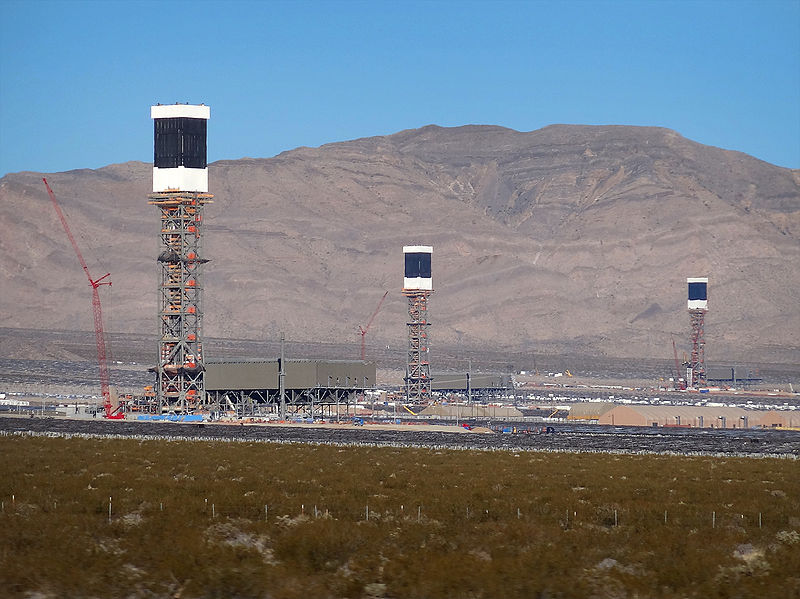 Ivanpah use mirrors to reflect sunlight, in order to heat and boil water. This produces steam, which spins turbines to produce electricity. When done at a small scale, it can be a clean and sustainable process. Photovoltaic solar panels, which convert sunlight directly into electricity, are even more democratic. They are easy to decentralize and put on rooftops.

In fact, Ivanpah’s grassroots opponents tend to strongly support solar power. The group Solar Done Right advocates decentralized solar energy as an alternative to mega-solar projects like Ivanpah. They argue that there is plenty of already-paved surface where we can safely install solar panels: rooftops, vacant parking lots, and former industrial sites known as brownfields.

According to the US Department of Energy, supplying all of the country’s electricity from solar photovoltaics would require 17 square miles of land in each state. Brownfields alone could provide 90 percent of the needed land!

The owners of Ivanpah—Google, NRG Energy and BrightSource—took a far more destructive, centralized approach. Their installation is four times larger than New York’s Central Park. According to Reuters, it can even be seen from space! Even worse, the companies decided to build it in the Mojave Desert, a highly sensitive ecosystem and sacred land for the Coloardo River Indian Tribes.

Phil Smith, another Chemehuevi elder, says Ivanpah approaches a centuries-old Chemehuevi prayer altar. In December 2010, La Cuna sued to stop the development of Ivanpah and five other mega-solar projects in the Mojave.

The Mojave is habitat for the desert tortoise, a protected species under the Endangered Species Act. The number of desert tortoises has decreased by 90% since the 1950s, according to Defenders of Wildlife. In 2011, the Bureau of Land Management estimated Ivanpah’s construction would kill as many as 700 juvenile tortoises and would disturb thousands.

Ivanpah could also prove disastrous to birds, since it is adjacent to the critical bird breeding ground Clark Mountain. With three 40-story towers and hundreds of thousands of mirrors, the installation scorches birds to death as it reaches extreme heats, up to 1,000 degrees Farenheight. Regulators have already found dozens of dead birds there including “a peregrine falcon, a grebe, two hawks, four nighthawk and a variety of warblers and sparrows,” according to the Wall Street Journal, which called Ivanpah “The $2.2 Billion Bird-Scorching Solar Project.”

Liberal environmentalists say climate change is so urgent that we have no time to oppose mega-solar projects. Their single-issue approach is politically suicidal. Abolishing fossil fuels will require a coalition that includes people organized around issues like indigenous rights, wildlife loss, and corporate power. To say these issues matter in the case of Keystone XL but not in the case of Ivanpah is to invite accusations of doublethink. That is, it will invite accusations that they sometimes believe one thing and sometimes believe the exact opposite.

Last November, about 90 people from across Connecticut got together to hear the engineer Mark Jacobson explain how wind, water and sunlight can meet all of the world’s energy needs. The event was inspiring enough that the Connecticut Sierra Club shortly afterwards endorsed the goal of 100% renewable energy within 17 years. It was clearly exciting to see so many people envision a world without fossil fuel energy.

Still, the example of Ivanpah shows that climate activists need to clarify what kind of renewable energy they support. There is the wrong kind: the kind that sacrifices people and ecosystems while enriching corporations. Examples include Ivanpah, Transcanada’s Kibby Mountain wind farm, and HydroQuebec’s mega-dams. Then there is the right kind: the socially just kind, the ecologically sound kind.

Originally posted at Capitalism vs the Climate/