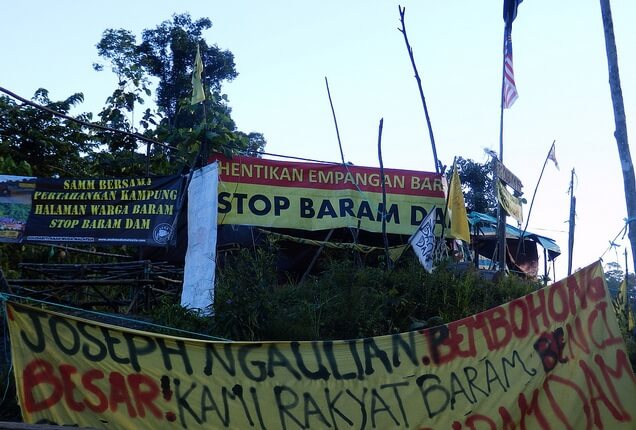 Government and Companies Complicit in Violating Freedom of Assembly and Land Rights
Indigenous Peoples at Proposed Baram Dam Site have never given consent for the dam to be built or for logging and other preparatory works to proceed. (International Rivers)
Support our journalism. Become a Patron!

KUALA LUMPUR – Malaysian and international human rights organizations have united to publicly condemn the actions taken by authorities and logging company representatives to intimidate Indigenous Peoples in Sarawak at the proposed site of the Baram Dam. On 21 October, coercive action was taken by police from the General Operation Force (GOF), Forest Department officers and personnel representing logging interests from the company MM Golden to pressure residents of Long Kesseh to abandon their customary lands and disperse from the site, where they had set up a barricade. As a result of the violation of rights outlined in the national constitution and provisions of the UN Declaration on Indigenous Peoples, an urgent appeal was submitted on 22 October to the UN Special Rapporteur on the Rights of Indigenous Peoples, Ms. Victoria Tauli-Corpuz. The appeal calls on her to raise concerns with the Government of Malaysia about the actions taken to forcefully dismantle the barricade, which had been set up one year ago by local residents of Long Kesseh to assert their native customary rights (NCR) to land being allocated against their will for the Baram Dam site.

Exactly one year ago, on 23 October 2013, the people of Long Kesseh set up a barricade on an area of native customary land that would be submerged if the 1200MW Baram Hydroelectric Project is built as proposed by Sarawak Energy Berhad (SEB). If this dam is completed, it would inundate 26 villages, including Long Kesseh, flooding 400 square kilometers of land and displacing between 6000 to 20,000 people. In response to SEB’s efforts to begin preparatory work for the Baram Dam, residents of Long Kesseh and surrounding areas symbolically marked their defiance by building a barricade on their own land.

The members of longhouses to be affected by the Baram Dam, including Long Kesseh, have never given consent for any timber clearance or other preparatory project works to proceed on customary lands. Yet, agents working with M. M. Golden Sdn. Bhd. are claiming the land is part of a concession they were granted. Although the circumstances related to the issuing of their logging permit remain ambiguous, the company has become associated Sarawak Energy Berhad’s efforts to clear timber around the Baram River and help pave the way for the construction of the proposed Baram Hydroelectric Project.

Serene Lim of the national human rights group, SUARAM, explained, “Villagers in Baram are defending their customary property rights; they have not granted free, prior and informed consent for their land to be taken by the government or any private firm. That is why the people of Long Kesseh continue to affirm their rights to the area, and why they decided to rebuild the barricade.” She added, “It is unacceptable that the authorities are evidently backing M.M. Golden’s incursion onto native customary lands, while completely disregarding clear legal provisions and precedents protecting the rights of original landholders. Given the complicity of government authorities along with agents hired by logging and energy companies in violating fundamental human rights, we decided to bring this case to the attention of the UN Special Rapporteur on the Rights of Indigenous Peoples.”

According to Thomas Jalong, a resident of Baram and President of the National Indigenous Peoples’ Network, Jaringan Orang Asal SeMalaysia (JOAS), “Sarawak Energy needs access to the area currently being defended by the villagers if they are to proceed with the proposed Baram Dam. Despite the fact that no social or environmental impact assessments for the proposed dam appear to have been approved, SEB is ready to jump into preparatory work. This confrontation at Long Kesseh is appears to have the direct aim of opening up grounds for the Baram Dam to proceed. However, the personnel involved have failed to intimidate the villagers into surrendering their land so that it could first be stripped of timber and then subsumed by a dam.”

“We are calling on M.M. Golden, SEB and the Government of Sarawak to respect the native customary rights land designation and the rights of Indigenous Peoples to free, prior and informed consent,” said Tanya Lee of International Rivers. “As a matter of urgency, government authorities, companies and financiers must accept the fact that the Kayan, Kenyah and Penan People of Baram have expressed their widespread opposition to the Baram Dam and to further logging on their land. Upholding national and international law along with industry best practices would mean withdrawing from the area and immediately returning any land already acquired for the purposes of the Baram Dam to the rightful landholders. ”

The press release can be downloaded here.