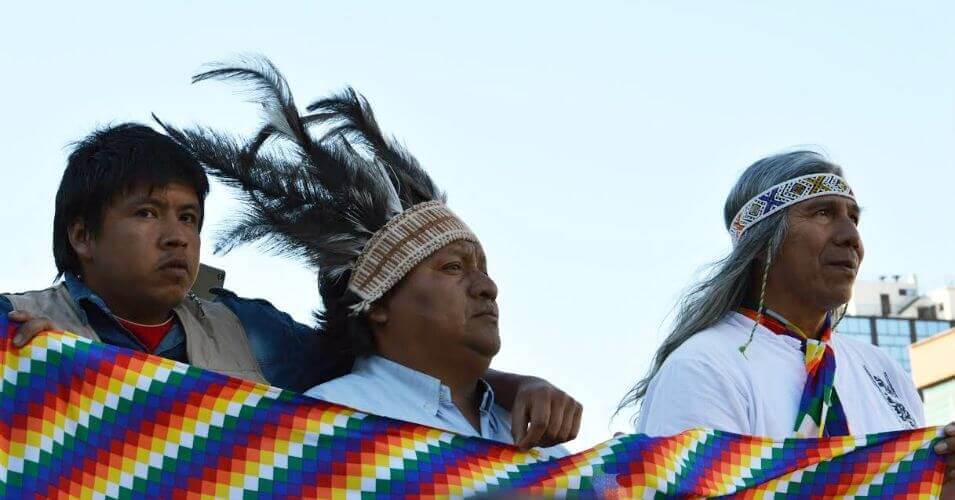 Argentina's Indigenous Territorial Emergency Law expires in November. More 1500 communities could be affected
Felix Diaz (far right) and other leaders of the Indigenous Qom and Wichi Peoples during a protest camp on the main avenue of Argentina's capital of Buenos Aires in 2015. Photo: Fionuala Cregan.
Support our journalism. Become a Patron!

Argentina’s Indigenous Territorial Emergency Law, which restrains legal evictions and prevents native communities from losing their ancestral lands, expires in November. There are over 1500 communities in danger.

Each winter, with the first frost, the shepherds of the Suyay Leufu Lof (the basic social organization of the Mapuche, Huilliche and Picunche peoples) of Los Molles, in Mendoza, descend from the mountain range, herding goats towards the fields in the plains. The community has inhabited these lands for many generations; but, they lack title deeds. A group of businessmen claim this land as their own.

In May of this year, the Mapuche managed to stop a court-ordered eviction relying on the protection afforded by the Indigenous Territorial Emergency Law, which suspends eviction proceedings and establishes the territorial survey of more than 1,500 communities across Argentina. The period of validity of the Law expires on November 23, 2017. If it is not extended, many of these communities will be left unprotected and many could lose the lands where they have been living since time immemorial.

Two weeks ago, the conflict of the Suyay Leufu Lof reached Buenos Aires television. That was 22 days after the “disappearance” of Santiago Maldonado in the midst of the repression by the Gendarmería of the Mapuche in Chubut. TV host Eduardo Feinmann interviewed businesswoman Rosita Aldao, who accused native families of forming an “armed organization”. “RAM seizes land in Malargüe”, said the graph on the screen (RAM is the acronym for Ancestral Mapuche Resistance, an alleged guerrilla group operating in Argentina and Chile), while Feinmann accused the Mapuche of being “terrorists” and “usurpers.”

The media offensive is intended to establish a relation between indigenous peoples and “extremist” armed organizations (as Clarín, the largest newspaper in Argentina, published on its front page on August 28), using scarcely credible accusations, such as that they are being “logistically supported by the Colombian FARC and Kurdish extremist groups in Turkey”. The demonization of indigenous communities is the prelude to the discussion of whether or not to extend the Indigenous Territorial Emergency Law and paves the way for the deployment of security forces into territories that are being claimed by big entrepreneurs, such as Italy’s Luciano Benetton and England’s Joe Lewis.

“Argentina’s National Constitution is a very good framework, but leaves enormous legal insecurity for the recognition of legal territory of indigenous communities,” says Paola García Rey, director of Human Rights Protection and Promotion at Amnesty International. “The violent indigenous who wants to occupy half of Argentina is not real. Stigmatization and persecution are spreading, putting into question the legitimacy of the indigenous claim in general”, she adds.

Law 26.160 was passed at the end of 2006 and granted a period of 4 years to survey the native peoples’ territories throughout the country. The deadline was extended in 2009 and again in 2013. In these eleven years the survey of 759 of the 1.532 identified communities began. Of these 759 communities, the National Institute of Indian Affairs (INAI) considers that the surveys of 459 communities have been “completed”. That at is to say: the “current, traditional and public occupation” of these 459 communities has been officially recognized.

Although the Law makes no provision for securing the land, this resolution is an essential step to move in that direction. “The survey amounts to a recognition by the State that a territory is inhabited by a community. If the period of validity of the Law is not extended, the territories which have so far been left out of the survey will be exposed to possible evictions”, explains Luna Miguens, coordinator of the economic, social and cultural rights area of the Center for Legal and Social Studies (CELS).

On August 9, International Day of the World’s Indigenous Peoples, Amnesty International, CELS and 15 other organizations launched a campaign demanding the Argentine National Congress to extend Law 26.160 until November 2021. According to Amnesty International, “60% of the communities registered by the INAI will be left adrift if the Law is not extended and the possibility of their territory being surveyed will be cut short. The expiration of this Law would leave communities unprotected against the possibility of being evicted”.

The dispute over land between corporations and communities extends across the country. The territory that the Mapuche Campo Maripe Lof inhabited in Loma Campana, Neuquén, in 1927, was turned into corporate booty in 2011, when YPF-Repsol announced its desire to exploit the Vaca Muerta oil fields. The community had not been surveyed under Law 26.160. In July 2013, the Mapuche occupied two oil rigs and forced a dialogue with YPF and the government of Neuquén. The company promised to start a development plan for the community and the province agreed to carry out the survey of the lands. According to the community, none of these agreements have materialized.

One night in September 2016 a caravan of carrier trucks, impact hammers and vehicles carrying explosives entered the territory. The company Tecpetrol, a contractor of YPF-Chevron, intended to carry out a “seismic exploration” to assess the resource potential of those lands. Since then, the community has kept up with resistance. In June of this year, the Gendarmería settled in Mapuche territory to guarantee the exploitation of the oil wells.

The Qom Potae Napocna Navogoh community, known as La Primavera, lives in the Laguna Blanca area in the Province of Formosa, in northeastern Argentina. In 2014, the INAI and the Institute of Aboriginal Communities of Formosa carried out a survey within the framework of Law 26.160. But the process violated the right to consultation and participation since there was no community involvement, and the sketches and narratives by the Qom describing the places where they develop their life projects were not taken into account. As a result, the dwellings of 17 families, including that of community chief Félix Díaz, were excluded from the survey.

Over the past eleven years, the Indigenous Territorial Emergency Law has allowed Indigenous Peoples to restrain the corporate appropriation of their lands and see some progress in the recognition of their possession of land. But if Congress does not extend the period of validity of the Law before November, more than 1,500 communities will be left unprotected—the campaign that aims to accuse Indigenous Peoples in Argentina of being terrorists may be only the beginning of what is to come.

This article was published as part of a partnership between Cosecha Roja and democraciaAbierta. You can read the original article in Spanish here. The article is being re-published at IC under a Creative Commons License.