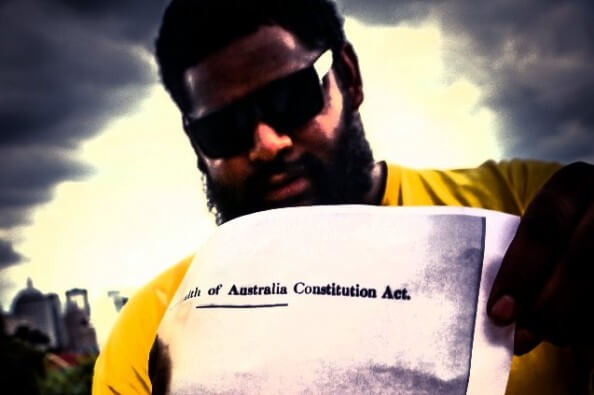 As representatives of the Aboriginal Provisional Government, we hope to develop ties with the Native peoples of Turtle Island (Canada). We plan to visit the Mi’kmaq people currently resisting mining companies exploiting their lands, to meet with members of the newly formed National Treaty Alliance, and to see how the Nisga’a Treaty (signed in 2000) is operating on the ground.

It is essential for us to connect with other Indigenous peoples around the world, as our struggle is not confined to colonial borders – decolonization is a path we all must follow. Engaging in nation to nation conversation, we have much to learn from and share with our Native brothers and sisters.

The APG has long sought to take the Aboriginal struggle onto the international stage, whether it was as guests of Gaddafi’s Libya or representation at the South Pacific Forum. And by traveling with the Aboriginal passport, we will be reasserting our right to self-determination as Aboriginal people.

Editor of Brisbane Blacks magazine Callum Clayton-Dixon (Nganyaywana) says “this will be a great opportunity for us to gain inspiration from the fight of other Indigenous peoples, especially given the current resistance to integration into the Canadian state and the fight against resource extraction in Native territories”.

According to Boe Spearim (Gamilaraay), “Once we realize and acknowledge the struggle for recognition of Indigenous sovereignty internationally, we will see that decolonization isn’t just an Aboriginal fight here in occupied Australia.”

“It is a fight just like that of the original peoples of Turtle Island, South America, Aotearoa, Scotland, Ireland and West Papua,” says Mr Spearim, a member of the Brisbane Aboriginal Sovereign Embassy.

“We as Indigenous peoples must understand that our fight is one.”