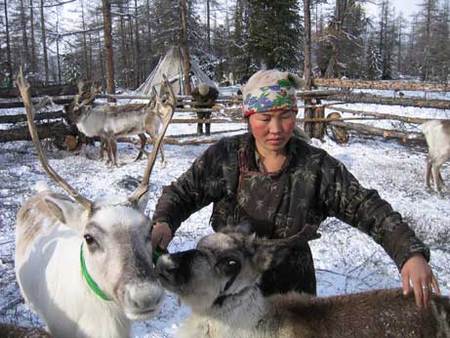 Dukha woman with her reindeer. photo Galdu
Support our journalism. Become a Patron!

The study outlines a number of strategies, including increasing reindeer herd sizes and closer monitoring of land use change, that can support both the herders’ ancient culture and the sustainable development of their homeland: the taiga.

Also known as the boreal forests, the taiga is the world’s largest biome, forming an almost continuous cover of coniferous forests in subarctic North America and Eurasia.

The UNEP report Changing Taiga: Challenges for Mongolia’s Reindeer Herders, is based on field investigations and numerous interviews with members of Mongolia’s rural Dukha community – of which only 200 or so members remain.

The report is the result of a direct request to UNEP from Mongolia’s Ministry of Nature, Environment and Tourism to assess the situation of the country’s reindeer herders and explore ways to guarantee their future livelihoods, as well as the sustainable management of the taiga ecosystem.

Of particular concern to the herders, finds the UNEP study, is the growth in unregulated, small-scale artisanal mining, which results in deforestation, forest fires, chemical contamination and poisoning of water sources. Reindeer herders have already abandoned some pastures in the western sections of their range because of damage caused by mining for gold, as well as green and white jade.

“The taiga – the Dukha homeland – is a hotspot for biodiversity and is rich in natural resources, but it is also one of the regions of Mongolia which could suffer the greatest impacts of climate change over the coming decades,” said Achim Steiner, UN Under-Secretary General and UNEP Executive Director.

In short, the challenges facing the herders spotlighted in this report are a microcosm of those facing communities large and small across the world – namely how to transition to a sustainable future that generates jobs and livelihoods without pushing past the limits of sustainability”, added Mr. Steiner.

According to the study, the transformation of Mongolia to a market economy in the 1990s resulted in eight million livestock being added to Mongolia’s pastures, significantly affecting traditional herding practices and the dynamics with the environment.

Erratic weather patterns are also taking their toll. Seven out of the ten most disastrous droughts and extreme winter events (known locally as ‘dzuds’) recorded since 1940 have occurred since 2000, resulting in widespread livestock deaths.

There are also concerns that current measures to conserve biodiversity within the region, such as the creation of national parks or protected areas, will limit access to pastures and adversely affect herder communities.

Current hunting laws are having a major impact on the food security of the Dukha, as hunting and trapping wild animals have been a traditional way of life for the community.

“As a culture tightly-coupled with the taiga environment, Dukha reindeer husbandry has played a significant role in shaping the environment and conserving the unique biodiversity surrounding them. It is important that any protected area regulations or community partnerships take full account of the Dukha’s needs and rights to access to their traditional pasture grounds and migration routes,” said Kathrine I. Johnsen, Chief Editor of the report.

Tourism offers both an opportunity and a threat to the Dukha. It provides much needed income and an alternative way to participate in the market economy. But herders have also altered reindeer migration routes to accommodate tourists, forcing the animals to feed on pastures of poorer quality and thus limiting the ability of herders to increase their herd size.

“There is a need for an increased understanding and dialogue between herders, tourism operators, local government, and other stakeholders on land use and resources in reindeer herding areas in order to protect both the biodiversity and the Dukha culture”, said Peter Prokosch, Managing Director of GRID-Arendal.

The main recommendations from the report include:

• Recording reindeer herders’ traditional knowledge of land use and natural resources, as well as traditional food culture, to promote the conservation of biodiversity in the region
• Closer monitoring of variations in reindeer numbers, changes in migration routes, land use changes, industrial development, local climate variability and variables affecting the reindeer herding community and taiga ecosystem.
• Formation of community partnerships to support biodiversity and traditional livelihoods of the Dukha reindeer herders.
• Evaluate current hunting regulations to identify how the laws affect reindeer herders’ access to food and income.
• Establish a programme to increase herd size and prevent and treat reindeer diseases, using both Western science and traditional knowledge
• Conduct an impact assessment of climate, environmental, social and economic changes in the region, including tourism. Scenarios for future land use change and developing local adaptation strategies should be included.
• Organize community round-table discussions and field visits to promote mutual understanding and dialogue between herders, tourism operators, local government, and other stakeholders on land use and resources in reindeer herding areas.

Provide assistance to develop local herders’ institutions, such as the reindeer herders’ information and knowledge centre in Tsagaannuur.

The report, which is part of the UNEP Nomadic Herders initiative, was officially launched during a special ‘Ice Cinema’ event held in Kautokeino, the heart of reindeer husbandry in northern Norway, as part of the World Indigenous Television Broadcasting Conference.

The report contains striking photographic portraits of the Dukha reindeer herders and their environment, as well as case studies of individual members of the community focusing on tourism, health and hunting issues.

The report was presented to HRH Prince Albert II of Monaco, who attended the conference in Norway.

Partners in the UNEP report included the International Centre for Reindeer Husbandry and the Taiga Nature Society.