A toxic cocktail runs through it

The Portland Harbor Superfund Site feasibility study released last [month] by the Lower Willamette Group (LWG) proposes a range of clean-up options by the parties responsible for the contamination in the Willamette River and marks a major milestone in the Superfund process, the Yakama Nation says.

But it doesn’t go far enough.

The federally recognized sovereign Yakama Nation is calling for the LWG, as the Potentially Responsible Parties to do all necessary remediation to the Willamette River, and to pay for the clean up of the lower Columbia River as well.

“The Yakama Nation cannot turn its back on the harm Portland Harbor pollution has done — and continues to do — in the Columbia River,” says Virgil Lewis, chairman of the Yakama Nation’s Fish and Wildlife Committee and a tribal council member.

Lewis, whose family has fished both rivers for generations calls this a once in a lifetime opportunity to do the right thing. Failure to do violates the Yakama Nation’s treaty, and the civil rights of all people who rely upon the rivers for subsistence fishing and other uses, he said.

When the Portland Harbor’s 11 miles of the lower Willamette River was designated a Superfund site in 2000, Yakama tribal leaders traveled to Washington D.C. to advocate for both rivers’ clean up. The Willamette streams into the Columbia River 100 miles above its mouth at the Pacific Ocean.

“Everything that is in the lower Willamette and sediment flows downhill into the Columbia, directly or through the Multnomah Channel,” says Rose Longoria, Yakama’s Regional Superfunds Project Coordinator.

The Yakama Nation, which has a 1.3-million-acre reservation in eastern Washington State, 11 million acres of ceded territory, and vast areas of usual and accustomed places has continually engaged in the Portland Harbor process to make sure that neither the Willamette or the Columbia rivers are short-changed, “in any way, shape, or form,” says Longoria.

Superfund law requires that Congress recognize tribes’ authority as natural resource trustees, and their right to oversee response actions that affect their interests. 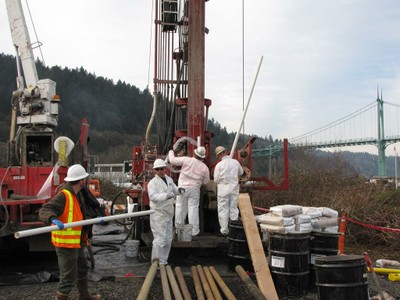 Monitoring well construction, courtesy U.S. EPA.At the Portland Harbor site the Yakama serve a support role to the EPA, overseeing the remedial investigation and feasibility study to ensure the process leads to a technically sound cleanup that protects resources important for sustaining the cultural practices of tribal members. It is one of several Superfund sites the tribe is involved in.

The tribe has taken a firm stand on both the clean up and damages to natural resources. Their concerns that remediation would not extend to the injury and damages to the lower Columbia led to their withdrawal from the Portland Harbor Trustee Council in 2009. “We are still on the table with the federal, state, and tribal government team, but Yakama is on its own with the natural resource issue,” says Longoria.

“There is nothing more important than honoring our ancestors by protecting the spiritual and cultural resource that has sustained our people for thousands of years, and restoring it for all people that will use this magnificent resource for generations to come,” says Lewis. “We must clean these rivers fully and completely.”

This article is reprinted with permission from the author.