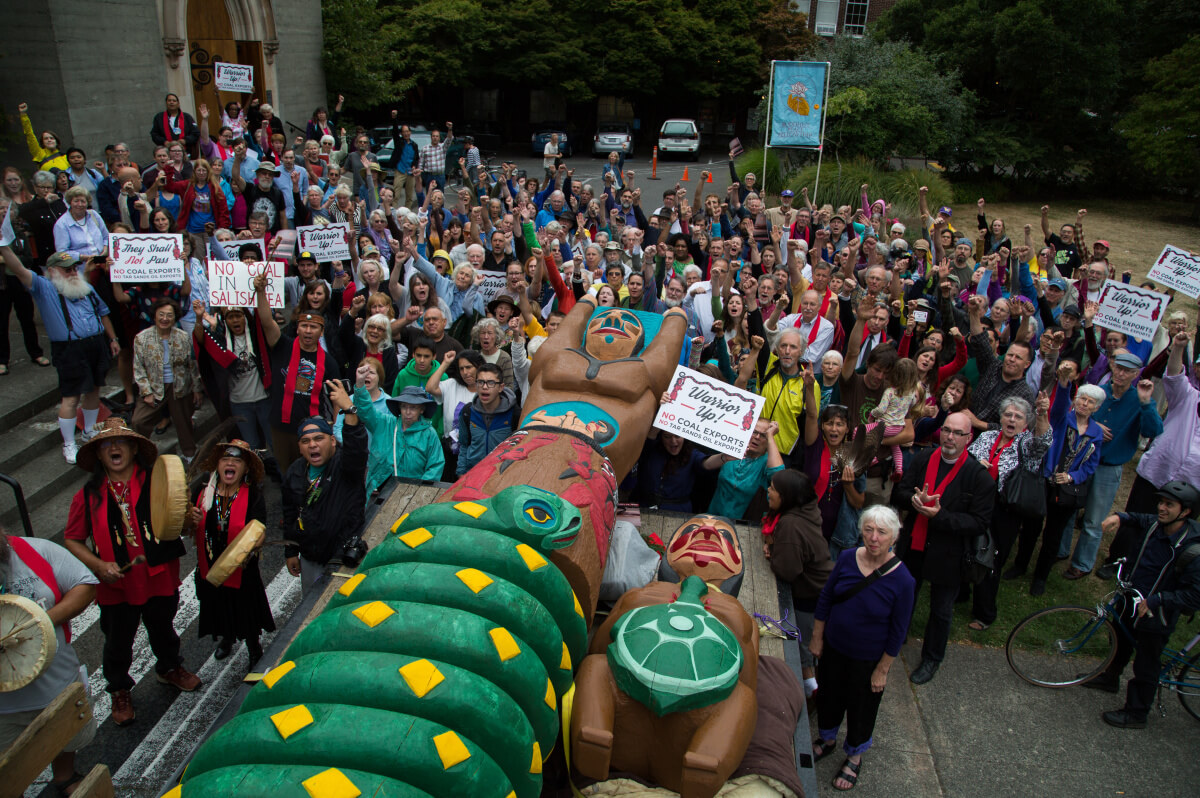 Photo by James Leder taken during the 2014 “Our Shared Responsibility–the Land, the Waters, the People” Totem Pole journey from South Dakota to the Salish Sea, which concluded in Alberta, Canada.
Support our journalism. Become a Patron!

The Lummi, a Coast Salish people, are the original inhabitants of Washington state’s northernmost coast and southern British Columbia. The Lummi Nation is a self-governing nation and is the third largest tribe in Washington state. Lummi refer to themselves as the Lhaq’temish, or People of the Sea. Their survival and culture have depended on the annual migrations of salmon for centuries, but salmon are now severely threatened after salmon stocks have drastically declined.

Presently, threatening the Lummi, their treaty rights, and the salmon they depend on, is Gateway Pacific Terminal (GPT), a 48 million metric ton per year coal export terminal proposed at Xwe’chi’eXen (Cherry Point) in Whatcom County, Washington, along the Salish Sea shoreline. The company proposing the coal export terminal is Pacific International Terminals (PIT), a subsidiary created for the GPT project by SSA Marine, one of the largest shipping terminal operators in the world.

Lummi people have fished in the waters of the northern Puget Sound and the Nooksack River since time immemorial, and the Lummi’s treaty fishing rights are secured to them by our federal government in the Treaty of Point Elliott of 1855. Article 5 of the Treaty provides that, “The right of taking fish from usual and accustomed grounds and stations is further secured to said Indians in common with all citizens of the Territory. . .”

Photo by James Leder taken during the 2014 “Our Shared Responsibility–the Land, the Waters, the People” Totem Pole journey from South Dakota to the Salish Sea, which concluded in Alberta, Canada.

Lummi Indian Business Council (LIBC) Chairman Tim Ballew II sent a January 5, 2015 letter to the U.S. Army Corps of Engineers (“the Corps”) requesting that the Corps take action and immediately deny SSA/PIT’s permit application for the proposed GPT project, “Based, inter alia, on the project’s adverse impact on the treaty rights of the Lummi Nation.” The LIBC letter further stated, “The impacts on the Nation’s treaty rights associated with this project cannot be mitigated.”

Since the news of Lummi Nation’s letter to the Corps, executives from SSA/PIT launched a barrage of proclamations of their supposed “good faith” offers for face-to-face negotiations between the company and Lummi Nation about the project. SSA/PIT used the media and the company’s GPT email mailing list to deliver those invitations, which in the language of sincerity, seemed to be put forth more for public opinion than anything else.

Recent statements on its Facebook page made by the Political Action Committee (PAC) SAVEWhatcom, which has received over $20,000 in contributions from SSA/PIT, appear to be an attempt to drive public opinion against the Lummi Nation’s strong oppositional stance to GPT. SAVEWhatcom’s statements call into question the sincerity of SSA/PIT in their claims of “good faith,” when a PAC the company donated money to puts out messaging that seems in such bad faith.

On February 5, one month after the Lummi Nation’s letter to the Corps, SAVEWhatcom made the following post on its Facebook page that seems fit to rouse some rabble in Whatcom County:

The Lummi Nation refuses to meet with SSA Marine to discuss mediation as they professed willingness to do the right thing after the SEPA and NEPA studies were completed.

The Lummi Nation owns and operates the Silver Reef Casino, who’s [sic] purpose it is to provide people with the ‘opportunity’ to gamble away their wages or Social Security checks. That’s a better purpose than to build a state-of-the-art dry bulk exporting facility at Cherry Point? And, as they lobby at the door step of the Washington State Legislator’s and the Governor’s office asking for preferential treatment above the non-Indian residents of the State of Washington…How ironic?

The SAVEWhatcom PAC and its affiliated WhatcomFirst PAC were formed in August and September 2013 for the November Whatcom County Council election that year. SAVEWhatcom strongly advocates for the GPT project, and in 2013, the PACs were funded primarily with $149,000 from SSA/PIT, BNSF, and coal companies. These dual PACs’ efforts were focused on attempting to get a slate of four conservative county council candidates elected who were thought most likely to approve permits needed for GPT. By setting up an affiliated PAC, and transferring money between the two PACs, it enabled them to hide the coal terminal-related contributor names from the public. 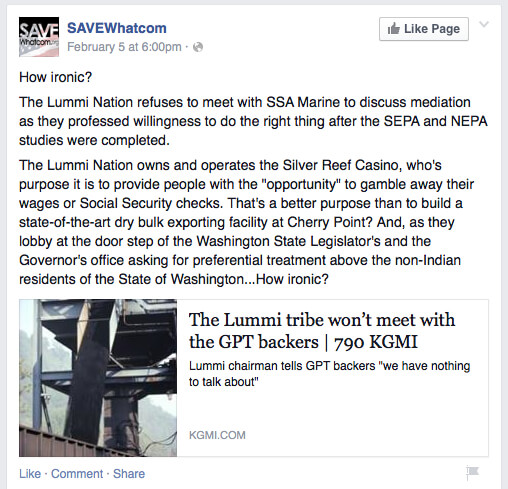 So, here goes the GPT-funded PAC SAVEWhatcom, making a defamatory statement that the Lummi Nation’s Silver Reef Casino’s “purpose” is to take people’s wages and social security checks. Statements like this create resentment, and/or fuel the already present resentment from some individuals and groups about Lummi Nation and its efforts to protect its treaty rights.

SAVEWhatcom’s post then pits its contrived image of the Lummi Nation’s Silver Reef Casino, against a modern and benign-sounding “dry bulk export facility.” By means of this construction, the post can readily come to life in the form of public pressure that seeks to compel the Lummi Indian Business Council into negotiations with SSA/PIT.

The Lummi Nation has already expressed multiple times that negotiating or discussing the GPT project with SSA/PIT is not an option. LIBC Chairman Tim Ballew said in a January 17, 2015 Bellingham Herald article: “We’re not negotiating with GPT or SSA because the standpoint from the leadership, the community and the fishermen is, there’s no way to mitigate the project.”

On July 18, 2013, the Whatcom County Democrats Central Committee passed a resolution, and according to Halterman, it was the reason the SAVEWhatcom PAC was formed. The title of that resolution is: “The Resolution to Honor the Lummi Nation’s Sacred Lands and Waters at Cherry Point.”

During the 2013 election season, SSA/PIT used that resolution negatively in its September 2013 GPT ad insert, placed in local newspapers. That honorary resolution has been misrepresented and used negatively by groups associated with SSA/PIT in their advocacy for GPT.

One of those groups, SAVEWhatcom, echoed SSA/PIT’s negative ad messaging about the resolution, distorting its intent and meaning, and used it as a weapon in their advertising during the 2013 election.

Since that time, SAVEWhatcom has continued this twisted misrepresentation. In both SSA/PIT’s and SAVEWhatcom’s advertising about the resolution, neither used its title, which, when provided, would have illustrated the resolution is to honor the Lummi Nation’s sacred lands and waters at Cherry Point. SAVEWhatcom perpetuated the false premise that the resolution represented efforts to “deindustrialize Cherry Point and make it impossible for local farmers to succeed,” in advertising such as a September 24, 2013 SAVEWhatcom Facebook post.

Putting on the squeeze

In the weeks leading up to SAVEWhatcom’s February 5, 2015 Facebook post containing negative messaging about the Lummi Nation, SSA Marine executives were busy touting their offers for “good faith discussions” they wish to have with Lummi Nation, through media, their GPT mailing list, and in letters. SSA Marine executive Bob Watters wrote in his Bellingham Herald January 10, 2015 op-ed (op-ad):

“Gateway Pacific Terminal and tribal interests can be harmonized if good faith discussions can take place, and we look forward to that opportunity.” 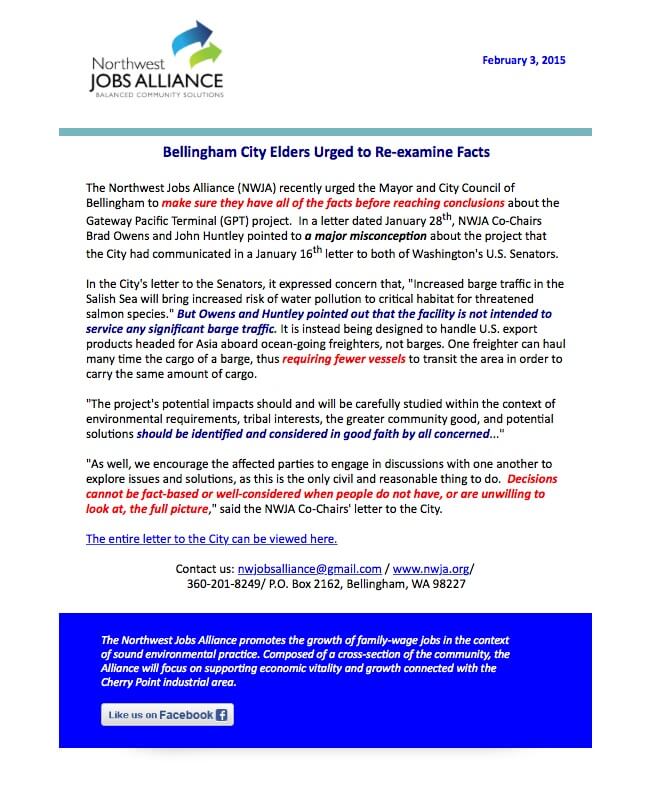 Nation’s January 5, 2015 letter to the Army Corps of Engineers NWJA GPT promotional piece responding to City of Bellingham’s letter in support of Lummi

By SSA/PIT continuing to talk at Lummi Nation and exert pressure with its public relations campaign through the media and via its GPT mouthpieces such as the Northwest Jobs Alliance, the company is not honoring tribal sovereignty and the government-to-government relationship that exists between Native American Tribes and the U.S. federal government. 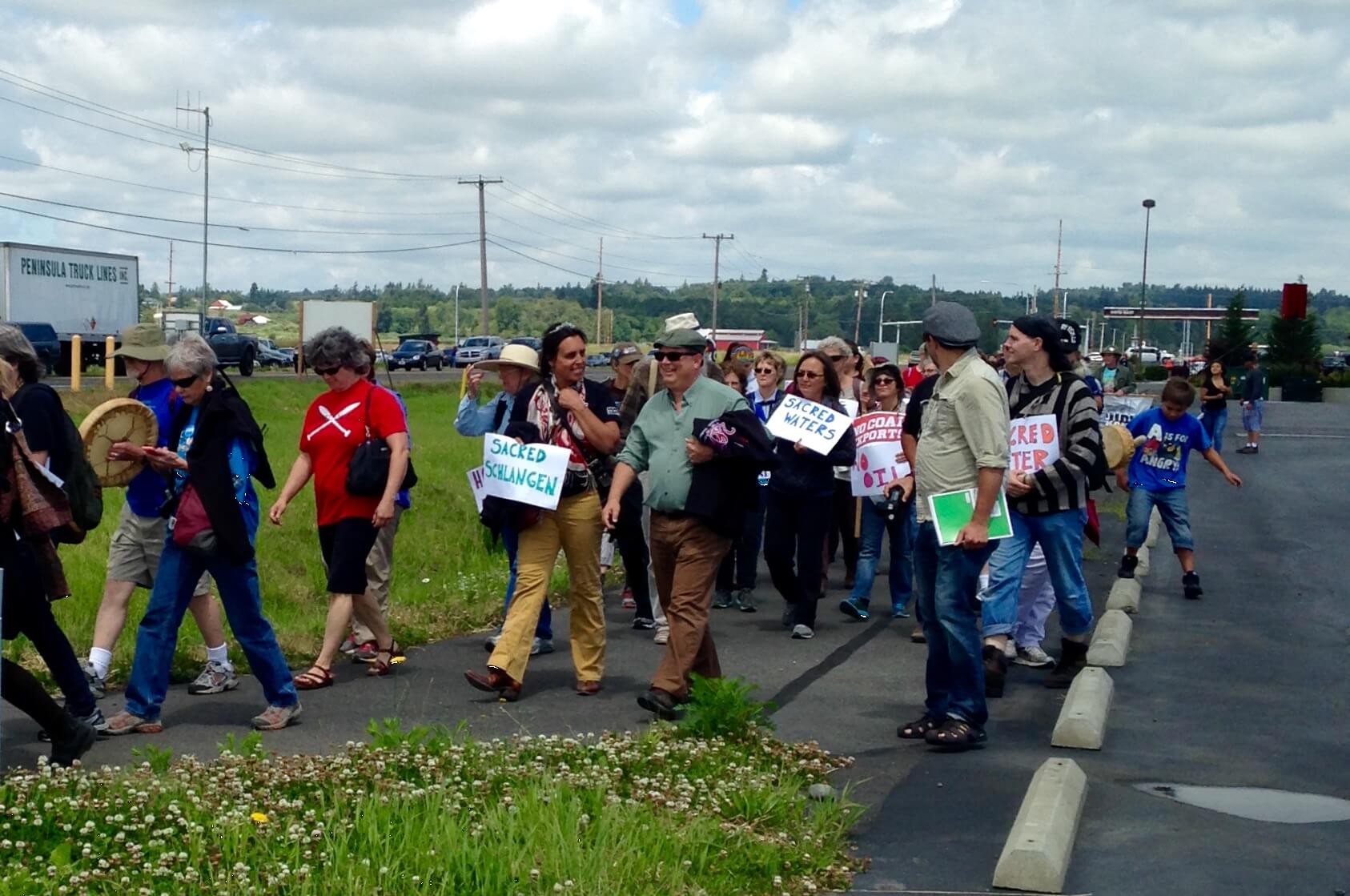 The trust relationship of federal agencies to ensure the protection of the treaty rights of the Lummi Nation and case law upholding those treaty rights, coupled with the huge wave of public opposition to the company’s proposed coal export terminal, are the momentous realities staring squarely into the face of SSA/PIT.

SSA/PIT executives have continued to make statements such as Skip Sahlin made in his January 30, 2015 letter to Chairman Tim Ballew, “Our door is always open and the GPT team looks forward to continuing to communicate with Lummi during the projects permitting and development process.” This messaging can give some people the incorrect impression that the Lummi are somehow not being reasonable. Lummi Nation Chairman Tim Ballew’s statement in a February 3, 2015 Bellingham Herald story provides clarity on that subject, “Negotiation between Lummi and Pacific International Terminals is not an option. Our treaty rights are non-negotiable and not for sale.”

Stomping in their grounds

What is, in fact, unreasonable, is how things have been framed by SSA/PIT, following the news of the Lummi Nation’s January 5, 2015 letter to the Corps. Some local media enabled that framing.

In a February 9, 2015 Bellingham Herald story, reporter Ralph Schwartz wrote: “There has been a lot of back-and-forth over the past five weeks among Lummi Nation, the U.S. Army Corps of Engineers and Gateway Pacific Terminal as the tribe asserts its fishing rights, in order to stop the coal terminal from being built.”

Technically, one could say, like Schwartz did, that the Lummi Nation asserted its fishing rights in order to stop the coal terminal, but a community member sent me an email offering another perspective:

Knowing there was a treaty against it, a coal terminal insisted on stomping in the middle of treaty-protected fishing grounds, so the coal terminal had to be reminded what it already knew—that it would be breaking the law—the supreme law of the land. It isn’t that the Lummi tried to stop a terminal. It’s that a terminal tried to stop them.

You can find a more in-depth version of this article at CoalStop.com