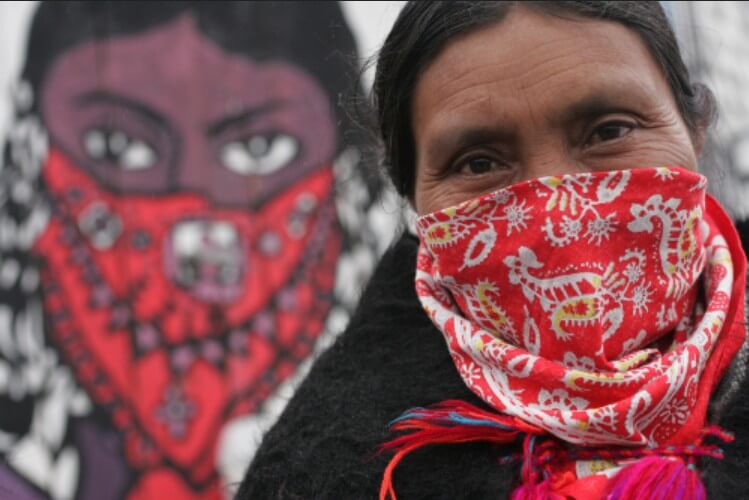 This month, the Zapatistas are organizing a major international meeting in Chiapas: the World Festival of Resistance and Rebellion Against Capitalism.
Support our journalism. Become a Patron!

They don’t say “how are you?” Instead, they prefer to ask “what does your heart say?” If you are well, you respond “jun ko’on” (my heart is united). If not, you have to respond that your heart is in pieces (“chkat ko’on“). And you have to be honest.

They are the tsotsiles Zapatistas of the Los Altos region and the Caracol II of Oventik, and they are getting ready to host the first World Festival of Resistance and Rebellion against Capitalism. The festival will take place between December 3 and January 3, and the main celebration (which will also be the commemoration of the Zapatista rebellion of January 1, 1994) will be hosted here in Oventik on December 31.

The caracol II of Oventik, the caracol of “Resistance and Rebellion for Humanity” as the Zapatistas call it, lies in the mountainous region of Los Altos. This region is inhabited by indigenous Mayan people — Tsotsiles mostly, but a minority of Tseltales as well. The Oventik caracol is the one closest to the city of San Cristobal de las Casas, which probably also makes it the caracol most visited by the internacionales, the international compas who happen to visit Chiapas.

It is also a caracol that is extremely well organized when it comes to questions of education. Each caracol and each region has its own autonomous system of education, formed by the very people of each zone, from below, according to their own needs and dreams. The Zapatista Rebel Autonomous Education System of National Liberation of the Highlands of Chiapas (SERAZLN, ZACH — Sistema Educativo Rebelde Autónomo Zapatista de Liberación Nacional, Zona de Los Altos de Chiapas) consists of three autonomous projects:

The latter center lies inside the caracol, and through its activities generates resources that are necessary for the sustainability of the primary and secondary schools. Here, people from all over the world who share the Zapatista principles of democracy, liberty and justice can come and learn Spanish or Tsotsil, living together with the other Zapatista students and promotores, and exchanging experiences, stories and songs. In other words, the enter is a meeting point of cultural exchange for all the people of the world.

Participating even for a short while in the Zapatista Rebel Autonomous Education System of the Los Altos region, one cannot fail to notice “a silent revolution” that has been taking place in these lands ever since the Zapatista uprising of 1994: that of the emancipation of the women.

They live together, study together, watch movies in the legendary Cine Pirata, and sometimes even sing together, sharing their music and culture with the international alumni of CELMRAZ. All this in a land where women would in the past be “exchanged” for cows in wedding arrangements, or where women were not allowed to choose their partners — they were chosen for them by their male family members.

A few years ago, a Basque friend who had been in these lands back in 1996, two years after the rebellion, told me that what struck him back then was the position of women in the society. He recounted that women, Zapatista women even, used to walk a hundred meters behind their husbands, and when the men would stop to talk to somebody, the women also had to stop and wait — carefully maintaining their distance.

Twenty years later, when he returned, the thing that surprised him most was the women did not only work with the men, as equals at all levels, but also that they would now openly ask him to dance together in local concerts. He would probably have danced to the tunes of Otros Amores, a Zapatista band named in honor of the LGBTQ communities all over the world, which Zapatismo refers to with the term “other loves.” All the above have been achieved thanks in part to the Zapatista Autonomous Education System.

First World Festival of Resistance and Rebellion Against Capitalism

It’s been a long time since the Zapatistas last organized a major international meeting like this one.

However, at a time when people all over the world — from the squares of Spain and Greece to Zucotti Park, Egypt, Tunisia, Turkey, Mexico and beyond — all turn their gaze towards Chiapas looking for an autonomous, direct democratic and horizontal system of self-governance from below, while the only alternative we are being offered back home is the same old parliamentary democracy, the Zapatistas respond by saying: “come and we’ll find our way together, without leaders and hierarchical structures.”

Maybe at the time when we need them the most, the Zapatistas (together with the National Indigenous Congress) invite the people of the world to Mexico once again — to meet, discuss, organize and decide the way forward towards our own emancipation. Just as the women and men of Chiapas have been doing for the past twenty years.

The programme of the Festival can be found here.