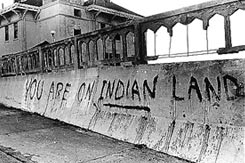 You Are on Indian Land

You Are on Indian Land was one of the first films in Canada to give voice to the concerns of Indigenous People.

Produced in 1969, the film documents a protest that was led by Mohawks from the Haudenosaunee community of Akwesasne on December 20, 1968.

At the time, community members were being forced to pay duty on purchases they made in the United States, despite the fact that the Jay Treaty of 1794, also known as the “Treaty of Amity, Commerce and Navigation”, affirmed that they were not required to do so.

The issue surrounding the Treaty has yet to be resolved, as a protest earlier this month reminds us.

The recent protestwas quite different from the one that took place 40 years ago. In ’68 members from the community blocked off the bridge linking Canada to the United states, which literally cuts through Akwesasne. Confrontation ensued.

“While the news media focused on altercations with the police”, says Albert Ohayonas on the NFB website, filmmaker Mort Ransen took a decidedly different approach. “Ransen showed what led to these altercations and let the Mohawks of the Reserve speak for themselves and tell their own story.”