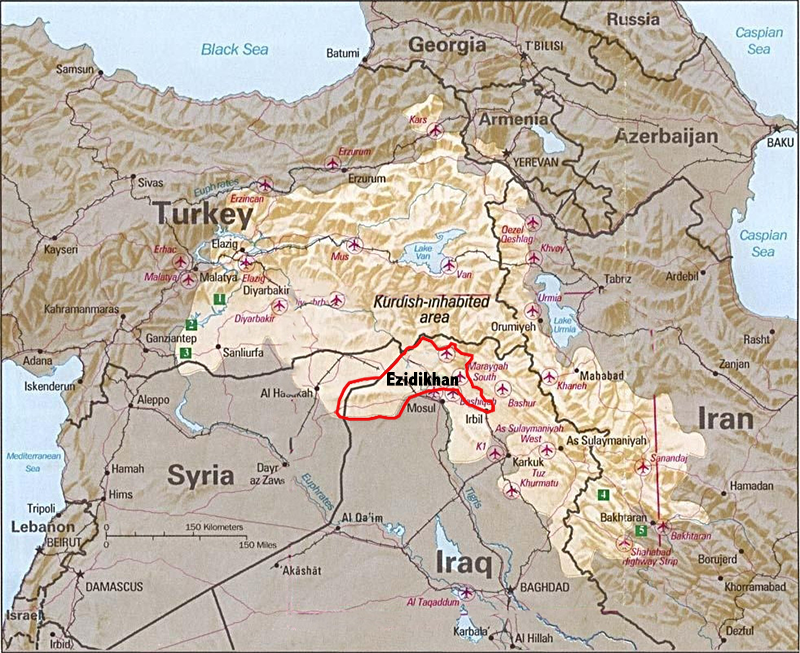 Yezidi establish the Provisional Government of the Autonomous Nation of Ezidikhan

A Yezidi IDP Camp in Northern Iraq
Support our journalism. Become a Patron!

In an historic step for the beleaguered Yezidi Peoples in northwestern Iraq, the Supreme Spiritual Council of the Yezidi Nation, led by Baba Sheikh Khurto Hajji Ismail, has proclaimed the establishment of The Provisional Government of the Autonomous Nation of Ezidikhan”.

The provisional government arrives just three years after the Yezidi people faced a horrifying genocidal assault that brought them to the edge of extinction.

In August 2014, the Islamic State (ISIS) committed “unimaginable horrors” against the Yezidi nation, according to a UN-mandated Independent International Commission of Inquiry (COI).

After invading Yezidi towns and villages around Sinjar, near the Syrian border in northwestern Iraq, ISIS fighters killed 5,000 Yezidi and enslaved more than 4,000 women and children. Tens of thousands more were displaced as a result of the siege.

In a statement that was presented at the 16th Session of the United Nations Permanent Forum on Indigenous Issues on Apr. 28, 2017, the Yezidi Nation said that:

“Thousands more women and girls remain in captivity under conditions of sexual slavery, as the well-known case of Nadia Murad demonstrates. Nadia continues to seek justice against ISIS in the international court system.”

In order to move the Yezidi toward a secure and prosperous future, the Supreme Spiritual Council acknowledges the need for “resolute action,” stating in its proclamation:

“Yezidi survivors of the Daesh holocaust across the Eastern Mediterranean region, as well as Yezidis from other parts of the world, will never cease to assert their right to a life of dignity, freedom and honest toil in their national homeland. This right is the natural right of the Yezidi people to be masters of their own fate, like all other nations.”

To that end, the Yezidi leaders announced their intention to hold free and open elections “for all adult Yezidis, with women, men and third sex being eligible to vote and seek office… as equals”.

They also say that the Autonomous Nation of Ezidikhan will “Actively promote Yezidi immigration and the return of the Yezidi Diaspora”; “Implement a charter and Constitution protecting individual and community freedom, justice and peace as envisaged in the traditions of Ezidikhan”; “Guarantee to the citizens of Ezidikhan freedom of press, religion, conscience, language, education, legal rights and culture”; “Safeguard any nation that wishes to come under the protection of Ezidikhan in a manner consistent with an agreed bi-lateral treaty”; and “Be faithful to the principles of the Charter of the United Nations and international law.”

The Supreme Spiritual Council goes on to extend a hand of friendship “to all bordering nations and states and their peoples in an offer of peace and good neighborliness, and appeal to them to establish bonds of cooperation and mutual help with the sovereign Yezidi Nation. The Autonomous Nation of Ezidikhan is prepared to do its share in a common effort to achieve freedom and stability for the advancement of the entire Middle East.”

The proclamation was signed in the Sacred Yezidi village of Lalish, “on the third day of Gelawej, year 6767 by the Yezidi calendar”—that’s July 25, 2017, according to the Gregorian calendar.