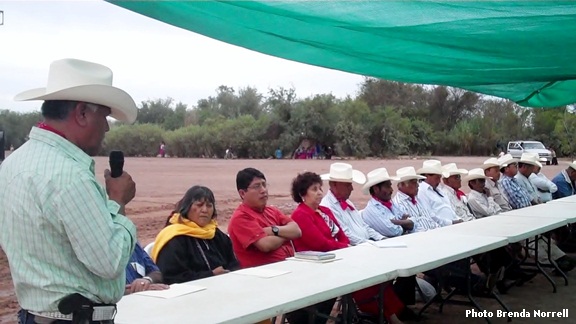 Yaqui Brigades for the Defense of Water

Yaquis in Sonora, Mexico said they will defend their rights to the Rio Yaqui, against the theft of water by the government of Mexico for the Independence Aqueduct.

Yaqui said blocking the major highway through their territory is their defense against the pipeline that would take Rio Yaqui water to the city of Hermosillo in the state of Sonora. Sonora is the state in Mexico that is south of the Arizona border.

Mario Luna, Secretary for the Yaqui Tribe, released the following statement at the conclusion of the International Forum for the Defense of Water. The forum, hosted by Vicam Traditional Authority, was held in solidarity with the Zapatistas, and brought together Indigenous from the Americas who are defending their water sources and water rights.

Indigenous speak out for sacred water
Ofelia Rivas, O’odham, was among those who spoke out on the sacredness of water and the need to protect water for future generations at the forum on Yaqui land in Sonora. O’odham are battling mining and mega agricultural projects in their ceremonial community of Quitovac in Sonora, south of the US/Mexico border. Watch this video of Rivas words during the gathering:

The forum came as Navajo and Hopi to the north of the Arizona border are battling the US and the state of Arizona, who are attempting to seize their water rights to the Little Colorado for Arizona cities, where watered is wasted, and for the Navajo Generating Station, one of the dirtiest coal fired power plants in America. A leaked e-mail revealed Sec. of Interior Ken Salazar plans to sneak a bill through the “lame duck Congress,” with Arizona Sen. Jon Kyl. Grassroots Navajos are urging the removal of the Navajos non-Indian water rights attorney. See Salazar’s leaked e-mail

Hopi released this statement and video in response: “For the first time in history the Traditional Hopi elders from the Village of Shungopavi (the Mother Village) are stepping forward to speak to the public. They have a warning for the world. They say they have been told this time would come when the water would be taken from them. If this happens it will have an effect on the whole world as they are the microcosm of the world, of the universe.” Video link: