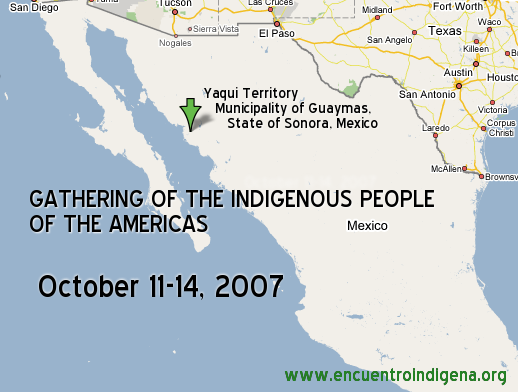 Here’s some news from Brenda Norrell regarding the Zapatistas’ regional and international summits. There are to be four regional summits, followed by the Intercontinental Indigenous Summit. See below for details and contact information.

By Brenda Norrell http://www.bsnorrell.blogspot.com/
.
RANCHO EL PENASCO, Sonora, Mexico — Yaqui Zapatistas from Vicam Pueblo met with O’odham in Sonora and reached out to the world’s Indigenous Peoples, extending a warm invitation to come and support the Zapatistas’ regional and international summits to be held in October.

“What happens here will determine how effective the Intercontinental Indigenous Summit is in Pueblo Yaqui,” Gov. Ramirez said, speaking in Spanish through an interpreter.

The regional Indigenous gatherings precede the Intercontinental Indigenous Summit/Encuentro de Pueblos Indígenas de América, Oct. 11 — 14 in Vicam Pueblo near Obregon in the southern part of the state of Sonora.

O’odham in Mexico Lt. Gov. Jose Garcia, among the O’odham who will host the North American Continental regional conference here, said it was wonderful to come together with Yaqui is such a spirit of unity and harmony.

“Respect,” Lt. Gov. Garcia said was the feeling that permeated the meeting at Rancho el Penasco, an eco-tourism and biodiversity ranch located south of Magdalena de Kino, a 90-minute drive south of the Nogales, Arizona border.

Rancho el Penasco, near the US and Mexico border, has become a favorite meeting place for the Zapatistas from the south to meet with Indigenous Peoples from northern Mexico and the United States.

Subcomandante Marcos came to Rancho el Penasco in Oct. 2006 to meet with Indigenous Peoples in the north, then returned several times in the spring of 2007. Marcos said he found rest and harmony here at the ranch.

During the planning meeting Aug. 17, Yaqui from Vicam Pueblo offered to help in any way they could to ensure the success of the North American regional summit. O’odham appreciated their efforts.

“I think the most important thing is working together in unity. They talked about respect, which is sometimes only a word,” Lt. Gov. Garcia said, emphasizing the respect shown by the Yaqui delegation.

Garcia said Indigenous are welcome to arrive at Rancho el Penasco on the evening of Oct. 7th for the two-day summit. Camping is available. For those driving, there are motels nearby in Magdalena de Kino, located two miles north of Rancho el Penasco.

After the summit here, there will be a caravan of cars to the international gathering in Vicam Pueblo.

CALL FOR A GATHERING OF THE INDIGENOUS PEOPLE OF THE AMERICAS

Considering that 515 years after the first invasion of our ancestral territories, the war of conquest, the plunder, and capitalist exploitation have not altered their course, but rather have become a new war of extermination, a war designed for the destruction and utter plunder of all the original peoples of the Americas;

Considering that the long history of wars of independence and numerous revolutions that have taken place on our continent have not yet changed the condition of colonized people, nor have they allowed for a full recognition of our rights in the nation states that formed in the last two centuries;

Considering that despite a long history of domination, our resistance has sustained itself and that our people continue to live and struggle, and that this struggle has been encouraged by the uprising of the Zapatista National Liberation Front (EZLN) in the first days of 1994;

Considering that the strategies of the national governments of the Americas have always sought the division of our people through the establishment of borders, reservations, and legislation designed to fragment us and to neutralize our efforts of autonomy;

Considering that the strengthening and the unity of the struggles of liberation of the indigenous people of the Americas will be possible as our peoples meet and come to know each other;

Considering that for our people it has proven necessary that their struggles be made known world wide in order to be supported by all honest movements that struggle for a society effectively just, free, and democratic;

All indigenous communities, tribes, and nations of the Americas are called to

THE GATHERING OF THE INDIGENOUS PEOPLE OF THE AMERICAS

Which will take place the 11th, 12th, 13th, and 14th days of October, 2007 in the community of Vícam, Yaqui Territory, Municipality of Guaymas, State of Sonora, Mexico, to address the following…

ORGANIZATIONAL PRINCIPLES
1st Principal. Delegates, observers, and communications media workers attending the Gathering will abide by the regulations of the Yaqui Tribe devised by their Traditional Authorities in order to govern their presence while in attendance.

2nd Principal. All participating indigenous communities, tribes, and nations are invited to demonstrate their clothing, songs, dances, and other traditional forms of expression.

3rd Principal. Authorities and Representatives of indigenous communities, tribes, and nations of the Americas are invited to participate as delegates with voice and vote.

4th Principal. Individuals and members of social movements and civil organizations in solidarity with the struggles of indigenous peoples of the Americas invited by the organizing commission will be able to participate as observers.

5th Principal. National and international communications media workers that are accredited by the organizing commission will be able to cover the event.

6th Principal. All agreements adopted at the Gathering will be made by consensus of the participants and not through the method of voting.

7th Principal. Organization of the Gathering, the national and international distribution of its publicity, as well as accreditation of participating delegates, invitees, and any unforeseen issues will be resolved only by the organizing commission in conformity with the Traditional Authorities of the Community of Vícam, Yaqui Tribe, The National Indigenous Congress (CNI), and the Sixth Commission of the Zapatista National Liberation Front.