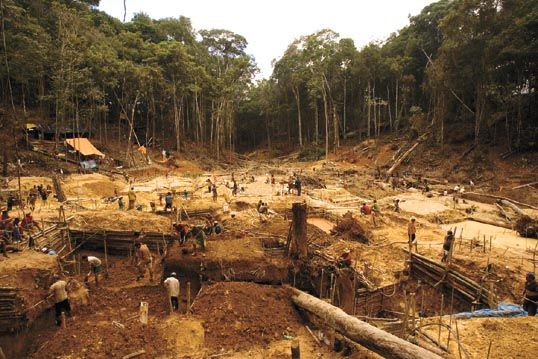 In central Brazil, the Yanomami community of Paapiu have begun calling for the immediate expulsion of illegal gold miners occupying their land.

According to recent report by Survival International, “[the Yanomami] say they are prepared to use bows and arrows to expel the invaders themselves if the authorities do not take immediate action.”

In recent times, the Yanomami’s territory has become the center of a renewed gold rush that follows in the foot steps of the one that took place in the mid 1980s.

Back then, there were an estimated fifty-thousand miners overrunning the Yanomami’s land, which is roughly the size of Portugal.

“Paapiu, which had a local population of 400 Yanomami Indians, had become ground zero for the gold rush because it had one of the largest airstrips in the region. By seizing control of the landing strip, the miners transformed what was once a quiet missionary outpost into a bustling frontier airport. At the height of the gold rush, it was estimated that some two hundred and fifty planes were landing and taking daily,” says Geoffrey O’Connor, a film maker who extensively documented everything happening at the time – “local rivers being polluted with mercury, large mines the size of football stadiums being carved out of the forest, the forest being torched by miners to make way for new encampments, new hydraulic mining equipment and supplies being shipped in daily on cargo planes, the Indians sick with malaria and begging for food, and Indians running panic stricken at the sight of an oncoming plane.”

The gold rush decimated the Yanomami.

“After many years of campaigning,” however, “their land was recognized and the miners expelled,” Survival explains.

But now they are all coming back. At the moment there are estimated to be about 3,000 miners.

That number will continue to grow, and then history will repeat itself, unless action is taken now.

Please take a moment to send a letter to President Luiz Inacio Lula da Silva, requesting him to take immediate action to uphold the constitution and protect the Yanomami’s rights and livelihoods. Visit Survival International to send the letter.