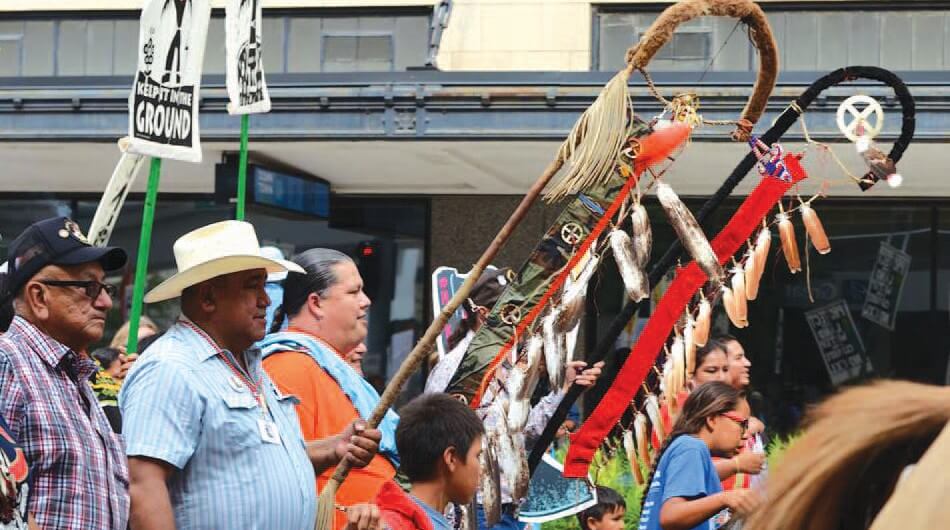 “The review systems have become so complicated and burdened with biased legal interpretations that some of the most important issues can’t even be discussed,” Yankton Sioux Tribal Business & Claims Committee Rep. Jason Cooke said Aug. 11, after testifying on behalf of the tribe at the hearings.

TransCanada Corp., based in Calgary, Alberta, is seeking public service commission (PSC) approval in order to finish building the outstanding length of the project from the U.S. – Canada border across tribal ancestral territory in Montana, South Dakota and Nebraska. 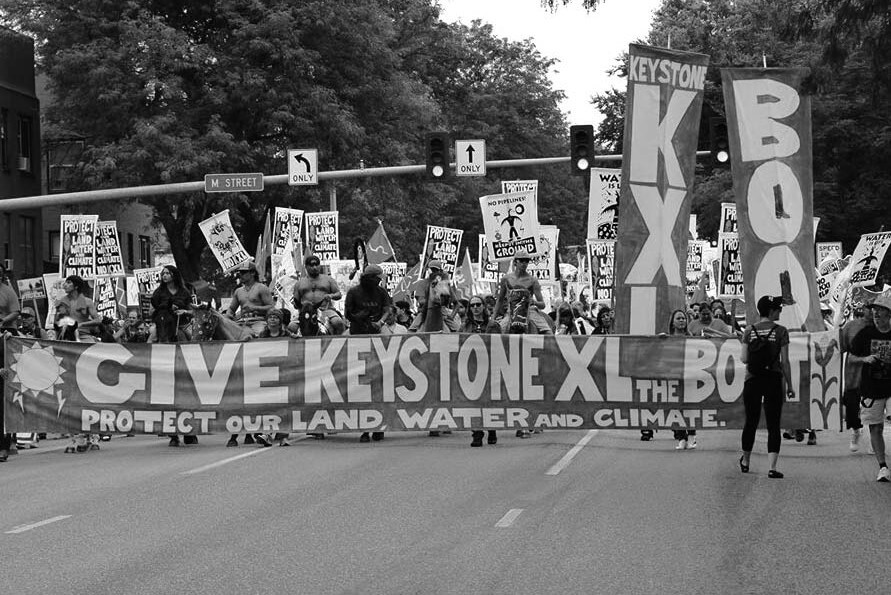 A March to Give Keystone XL the Boot attracted a stream of an estimated 600 participants to the state capitol in Lincoln, Nebraska on Aug 6. COURTESY/Northern Ponca Tribe of Nebraska

The PSC accepted testimony about the pipeline’s impact on property values, but ruled out any mention of pipeline safety concerns in an area of the Great Plains served by the Ogallala Aquifer.

“The Yankton Sioux Tribe is outraged and flabbergasted at the restrictions placed on its sovereign rights in the Nebraska Public Service Commission Keystone XL (KXL) Pipeline siting hearing,” it said in a media advisory from its headquarters in Wagner.

The scope of the tribe’s participation was limited to the topics of cultural resource and social issues, with no opportunity to present evidence about any other threats posed by the project, the advisory said.

The Yankton Sioux Tribe and the Northern Ponca Tribe of Nebraska were each permitted just one witness and forced to share one hour of cross examination. The Yankton witness was barred from cross examining the Ponca witness, based on the hearing officer’s perception that the two shared common interests.

“It is clear that the Nebraska process has a limited understanding of the role and importance of historic preservation and environmental laws that were created to monitor these kinds of developments,” the Yankton Sioux Tribe claimed.

“Federal agencies and developers, through their attorneys and employees, have learned to manipulate the system to gut its effectiveness,” the tribe added. “There is minimal, if any, effort by federal agencies to engage in meaningful consultation as mandated by executive order.”

The 1851 and 1868 Ft. Laramie Treaty protecting Lakota Territory for the Oceti Sakowin would be violated by the trespass of the pipeline, in flagrant contradiction to Article VI of the U.S. Constitution, which states that treaties are “the supreme law of the land,” Tribal Attorney Jennifer Baker argued. 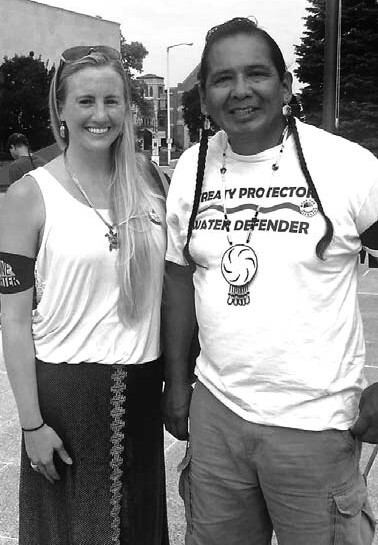 “Violations of the Constitution and other federal laws cannot be in the interest of Nebraskans, nor can the Public Service Commission’s endorsement of such violations,” Baker said.

The Yankton, or Ihanktonwan, and four other tribes jointly own the Nemaha Reserve in southeastern

Nebraska, qualifying them as landowners in the vicinity of the pipeline route, for purposes of the hearing.

The reserve’s cultural importance as burial grounds prompted the Ihanktonwan to initiate the International Treaty to Protect the Sacred against KXL and Tar Sands in January of 2013. Gathered at Ft. Randall with Ponca, Pawnee, Oglala, and non-Indian landholders to sign the treaty, they resurrected the Cowboy and Indian Alliance, fondly dubbed the CIA.

Now promoters, calling themselves the Treaty Alliance Against Tar Sands Expansion, have attracted more than 150 tribes’ endorsements, including the Aug. 8 signatures added in Lincoln by representatives of the Ponca Nation of Oklahoma and the Nebraska Intertribal Coalition, consisting of Ponca, Santee, Winnebago and Omaha.

“With our indigenous allies along the KXL route — like the Great Sioux Nation and all over Turtle Island –, we recognize the grave dangers in allowing this ‘Black Snake’ to enter our homelands,” said Chairman Larry Wright Jr. of the Ponca Tribe of Nebraska.

“As the State of Nebraska stands poised to make a potentially life-altering decision about permitting this poisonous bitumen to be inflicted on its population, we stand poised to protect all life now and in the future,” he said at the signing ceremony for adherents of the Treaty Alliance Against Tar Sands Expansion.

“We are standing together in prayer. We are aware of the United Nations Declaration on the Rights of Indigenous People and our treaty rights as they pertain to the permitting of the pipelines in our present and traditional territories. In solidarity and with respect and love for our Mother Earth and future generations, we say no to KXL.”

A March to Give Keystone XL the Boot attracted a stream of an estimated 600 participants to the capitol on Aug 6. Some of them came on tribally supported charter buses from as far away as Rosebud and Cheyenne River Sioux jurisdictions, as well as from Kansas and Missouri.

Historic cultural resources, including water, land, ceremonial sites, villages, and gathering areas still important to contemporaries are at stake with pipeline construction, Baker said. The Yankton Sioux Tribe “repeatedly stressed that the full length of the proposed pipeline route did not receive the trained eye of indigenous knowledge, a necessity to proper identification of these cherished resources,” she noted.

While legislation prohibits the Nebraska commission from considering safety issues relating to spills and leaks, “this restriction has been misconstrued to preclude testimony about the cultural impacts of spills and leaks,” she said.

Under mandate of the National Environmental Protection Act, the National Historic Preservation Act and other legal dictates, the U.S. State Department has contacted 95 tribes to determine interest in the project. It claims that obligatory formal consultation occurred with 84 tribes, including the Yankton Sioux and the Ponca Tribe of Nebraska, and that 67 tribes requested ongoing consultation.

The object of the private pipeline project is to transport so-called unconventional petroleum products from the tar-sands fields of Alberta and Saskatchewan in south-central Canada to Texas refineries and export facilities located on the Gulf of Mexico.

The International Treaty to Protect the Sacred against KXL and Tar Sands is “an expression of indigenous law prohibiting the pipelines/trains/tankers that will feed the expansion of the Alberta Tar Sands,” according to its promoters.

“The alliance is part of an indigenous sovereignty resurgence taking place all over Turtle Island where indigenous peoples are reasserting themselves as the legitimate governments and caretakers of their territories,” the group says.

Signatories aim to stop increasing output from the tar sands “and becoming an even bigger obstacle to solving the climate crisis,” they say.

“The world might not be able to immediately stop using oil tomorrow, but the last thing it needs is more oil, and especially not more of the dirtiest oil on the planet. It is critical that we urgently start building a more sustainable future and signatory nations want to be at the heart of that building process,” they add.

On Aug. 10, British Columbia Minister of the Environment George Heyman and Attorney Gen. David Eby announced regulatory and legal steps to make sure that Kinder Morgan cannot harm communities and ecosystems in their jurisdiction.

They said they won’t allow any construction on public lands until the province fulfills obligations to proper consultation with First Nations. They also are seeking to intervene in legal cases challenging the Kinder Morgan Pipeline.

“Not only does this decision give teeth to the fight in the courts, but it strengthens the government’s commitment to following through on promises to First Nations, many of whom are part of these legal challenges,” Greenpeace reacted.

The group urged divestment in TD Canada Bank, a major funder of the project. “In addition to stopping this pipeline in court, we need to stop the money at the source,” it said.

This article was originally published at Native Sun News Today. It has been re-published at IC with permission.