Thousands of delegates are gathered in Warsaw for another round of climate talks. On the other side of the globe, indigenous leaders say they’re done with the UN talks.

I have nothing to say to them. They are orators of the highest quality, but the time for excuses has gone.
– Uncle, Eskimo runner

GHOST RANCH, N.M. – As United Nations delegates gather in Warsaw in the 19th annual effort to craft a global climate treaty, indigenous leaders from across North America met half a world away and offered a prophecy: The solution to climate change will never come via the UN talks.

Tribal elders from the United States, Greenland and Mexico spoke of the need for individual action rather than government edicts, and of the difficulty – and urgency – of replacing economic questions with moral ones.

They spoke of grandfathers and grandmothers, of battles with alcoholism and disenfranchisement, of a world that’s changing around them and a need to do something for their grandchildren. Most of all, though, they talked of a need for a new direction in an increasingly unsustainable world.

Organized by the Bozeman, Mont.- based American Indian Institute, the gathering drew about 65 people from across North America.

Different palette
Here amid the hills and mesas that painter Georgia O’Keeffe made famous, these elders presented a different palette with which to look at environmental woes. They placed little faith in the weighty United Nations process that opened Monday and will draw thousands of people to Warsaw over the next two weeks to try to find a way to stem emissions of greenhouse gases.

“I have nothing to say to them,” said Angaangaq, an Inuk known here as Uncle and who since 1975 has been “runner” for his elders in Greenland, spreading their words worldwide. “Not one of those United Nations people responsible has ever changed.”

“They are orators of the highest quality, but … the time for excuses has gone long ago.”

The dismissal of the UN was all the more striking given that it came from those who, in the 1970s, spearheaded the quest to have the world body recognize indigenous rights.

Forty years later, they have moved on.

Faithkeeper
Oren Lyons is faithkeeper of the Turtle Clan of the Onondaga Nation in the Haudenosaunee, formerly the Six Nations Iroquois Confederacy. In the late 1970s he saw the UN as a “beacon” that would finally begin to address and restore indigenous rights. No longer. 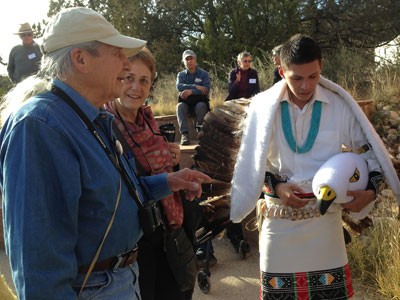 He spent years traveling to and talking before various global forums. At a summit in Davos, Switzerland, a few years ago he realized he had a “guaranteed prophecy” to offer. It still applies today:

“You will meet again next year, and nothing will have changed.”

Of course, Native elders are not the only ones feeling disenfranchised by the UN talks. Occasionally a “people’s summit” sprouts near the official one, offering space and a platform to artists, activists and others frustrated by lack of action on social and environmental justice issues at the UN proceedings.

Even at the UN talks, hope has been tempered: No breakthroughs are expected this year. Delegates and observers say the best they can hope for is progress toward a more ambitious agreement in Paris in 2015.

But for the elders gathered here in New Mexico, time is up. Change, they said repeatedly, must come from a far more personal level.

Seven generations
“The work that we have is for all of us to do,” said Vickie Downey, a clan mother at the Tesuque Pueblo in New Mexico. “We do this for our grandchildren.”

Many at the three-day forum referenced the ancient Haudenosaunee tradition of thinking seven generations into the future.

“We’re a small group, the indigenous peoples of the Earth, but we’re very old,” Lyons said.

And Lyons, who is getting old, too, senses a return to the “old values:” Respect, concern for the future, sharing.

“How do you instruct 7 billion people as to their relationship to the Earth?” he asked. “It’s very difficult – when you’re struggling to protect your people and you’re hanging by a thread – to instruct other people.”

Uncle brought a pair of drums from Greenland. He spoke of Nanoq, the polar bear, and of the 78 new species of fish swimming in Greenland’s waters – “I grew up knowing every single fish in the world of my home. Now I have 78 new ones to learn” because of dramatic changes in the environment.

Not just beautiful words
He spoke, too, of his reluctance to join the circle of elders and be a runner. But as a runner – as “the world’s most-traveled Eskimo,” as he said – he’s seen a universal message coming from tribes:

Change, he said, “is going to come from you.”

“Many, many Native people have the same sayings: It is you, not your city, not your state, not your government, not the UN.”