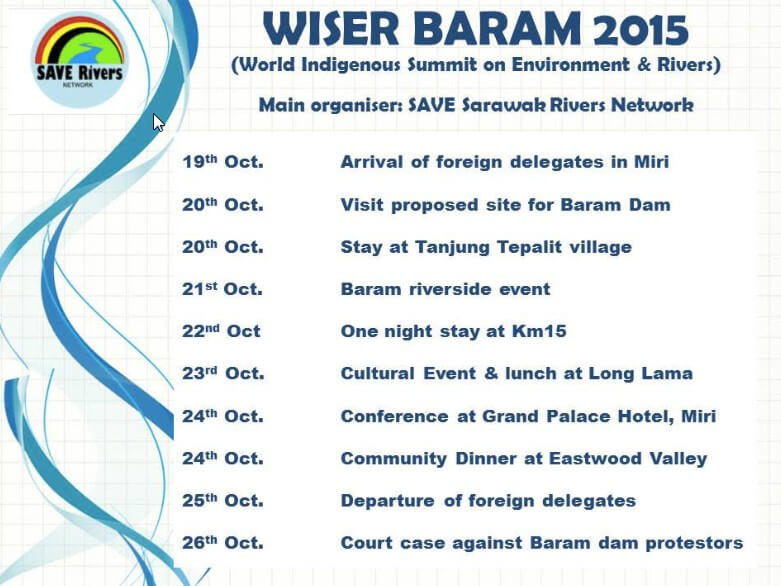 World Indigenous Summit on Environment and Rivers in Sarawak

Summit to celebrate second anniversary of the Baram Dam Blockades
Support our journalism. Become a Patron!

Miri, Malaysia – Celebrating the second year anniversary of the blockade against Baram-1 dam and the moratorium of works on the project, the indigenous people are organizing an international event.

The event, named, “World Indigenous Summit on Environment and Rivers” (WISER Baram 2015), is a five days program. Some of those who participate include indigenous peoples from Brazil, Honduras, Chile, the Philippines, Myanmar, Indonesia, Australia, the United States of America and the Wintu tribe of California. The foreign delegates will be accompanied by local participants from the various Malaysian dams. While the summit is to celebrate the two years anniversary of the blockade against the Baram dam and welcoming the moratorium, it is also is to build solidarity and sharing experience among the indigenous facing the threat posed by mega dams.

The two parts event will start with a visit to a village in the Baram district which would be flooded if the proposed dam is built. They will also visit the blockade camp sites. Celebration will then end with a Conference in Miri city on the 24th of October. The grand finally of the international event, will be Community Dinner in the evening of the 24th October. The dinner ticket is opened to all those who support the international struggle of the indigenous peoples against mega dams. Peter Kallang, the chairman of SAVE Rivers who host the event said, “Buy a table at the dinner and champion international human rights and protect the environment.” Those interested in joining the dinner can call, Caroline on 012 9780005. Maria on 014 681 0313 or Helen on 014 594 3345.

The blockade against the Baram-1 dam which started on the 23rd of October 2013, will be two years old this month. Two years ago, workers doing the preliminary works for the proposed dam were evicted by the Baram villagers. To ensure that no further works were carried out on the ground, two base camps were built for monitoring purposes. In stopping the construction of the access road to the proposed site for the dam, a monitoring base camp was built in Long Lama which is about 200 km from Miri city, while another monitoring base camp was built in Long Keseh which is 250 Km from Miri to stop works on the proposed dam site and it’s reservoir. Since the two base camps were set in October 2013, they have been continuously manned and thus the blockades against the Baram-1 dam is claimed to be the longest continuously manned blockade in Sarawak.

On the 30th of July 2015, the Chief Minister of Sarawak, announce a moratorium on work for the dam. While the villagers in Baram welcome the moratorium, they still maintain the base camps to stop the logging activities which are carried out under “Salvage Logging” permit given by the government in anticipation of the proposed Baram-1 dam. The native right on land proposed for the dam site and its reservoir were taken from them with gazettes issued by the government. “The people appeal to the government to revoke the logging permits and the gazettes and then they will review the relevance of the blockades,” said Peter Kallang the Chairman of SAVE Rivers.