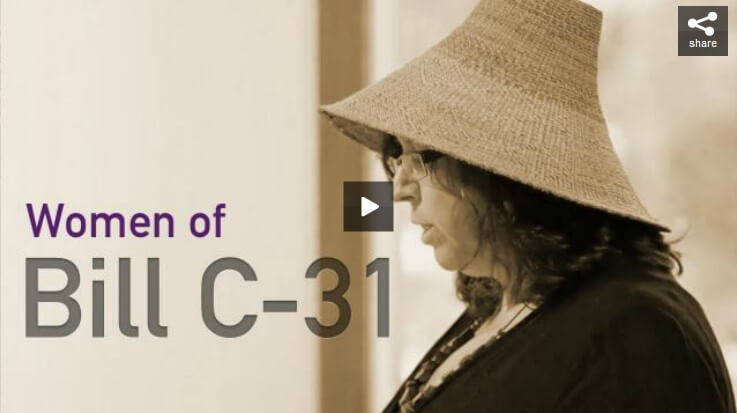 In this video presentation, a group of Skidegate women discuss Bill C-31, its impact on their lives and their journey to recover what was removed by a few strategically positioned ink scratches.

As described by NELL-ANNE TOEGEL from the ISLANDS WOMEN SOCIETY,

Bill C-31 is a consequence of the 1876 revision of the Indian Act, which assigned to Parliament legislative jurisdiction over ‘Indians and Lands reserved for the Indians’.

It provided the government power covering status and civil rights.

Over the years, the Indian Act was considerably expanded to promote assimilation policy. More specifically, it established the statutory rule that an Indian woman lost status upon marriage to a non-Indian. A 1973 decision of the Supreme Court of Canada was widely criticized when it held that this rule did not discriminate against women even though Indian men kept their status if they married non-Indians (their wives and children automatically gained it). If the father of a child
was not listed on the birth certificate, Indian Affairs categorized the father as non-status – thus denying the child status.

Government finally amended the Constitutional Act to include Equality Provisions in 1982. Those who had lost status through marriage were reinstated as Indians and as band members. Their children were granted Indian status, but would not obtain band membership for 2 years. This interval was intended to give Indian bands time to enact their own membership codes. This provided bands the opportunity of excluding the children, but not their mothers. It left the door open, in the name of self-government, to voluntarily pursue the system it had originally put in place.

As a component of the same policy that introduced residential schools, Bill C-31 had far reaching impacts. Most importantly,

1. It altered social structures, for example, by converting the inherent matrilineal Haida society to a patrilineal one.

2. It alienated children from their families and communities, comprimising their sense of self and leaving them vulnerable.

While the trauma of Bill C-31 is felt even now, a process of healing is underway with Indigenous women finding their voice and asserting – reasserting – their claim as full members of their communities according to their matrilineal tradition.

Video produced by the Haida Media Network and hosted on Isuma.tv