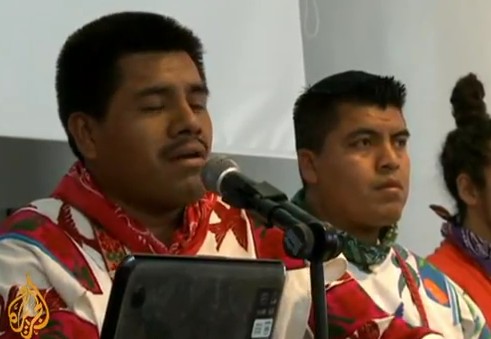 The Mexico government recently announced new measures to protect thousands of acres of land considered sacred by the Wixarika (Huichol) People. Despite being hailed as a victory by the government, Wixarika leaders say it is nothing more than a “media ploy”, because it only amounts to one percent of their land. Al Jazeera reports.

For more news and updates, visit the website of the Wirikuta Defense Front

*On the eve of the Wirikuta Fest concert, the government’s announcement for the protection of Wirikuta is considered by Wixárika authorities to be incomplete and filled with false information that distorts the reality of the sacred place.

*Mining in the sacred territory of Wirikuta is not canceled.

*The geographic referencing of sacred altars carried out by the Mexican government was not done with the consensus of the Wixárika people, nor was it consulted in all of the communal assemblies nor by the authorities who reject its results.

*The main mining project (Universo) and the tomato farms that threaten Wirikuta are not considered in the government’s latest act.

*Despite the great preoccupation that the Wixárika authorities have regarding the government’s announcement, they maintain their intention of dialogue and accords with the Mexican State for the integral defense of the Sacred Territory of Wirikuta.

Wirikuta is the Sacred Territory of the Wixárika people and covers an extension of 140,212 hectares.

Currently, mining companies have active projects in the region through 79 mining concessions that span almost 70% of the sacred territory of Wirikuta and the Natural Protected Area (NPA) that is protected by state decree. 97,000 hectares are currently conceded. Of these, Revolution Resources holds 59,000 hectares worth of concessions in Wirikuta for their Proyecto Universo. This data is not alluded to in the government’s announcement.

Yesterday the federal government, through the heads of the Ministry ofInterior, Secretary of Economy, Agrarian Reform, Environment and the National Commission for the Development of Indigenous Peoples (CDI), communicated in the form of a PRESIDENTIAL DECREE that an area of approximately 45,000 hectares that has not been concededfor mining is to be declared a National Mining Reserve. This was not consulted with the Wixárika communities and 95,000 hectares remain unprotected.

The geographic referencing carried out by the Ministry of Agrarian Reform and CDI was not consulted, handed over or accepted by the majority of the Wixárika people. Furthermore, there was no consideration in the form of a National Mining Reserve.

The government says that there is no mining activity in Wirikuta and that there has been no damage done on the Reserve. As such, it appears to ignore the exploration activities of several mining companies that have beenwitnessed and photographed. In addition, the government ignores the devastating agroindustrial plants which are illegally felling and destroying the Reserve and that a year ago were denounced by the Wixárika people to government institutions. Each day that they continue, these activities are annihilating thousands of protected species, many of which are endangered.

The mention made by the Secretary of the Environment, Elvira Quezada, that Wirikuta will be recognized as a federal Natural Protected Area opens the door for the wider protection of the reserve, under the model of a Biosphere Reserve—one which we consider to be ideal. We respectfully exhort that a free and informed consultation on the management plan for the reserve be carried out at the communal assemblies of all the Wixárika communities, being that these are the highest organs of decision-making of the Wixárika people. This consultation should be based on studies and the knowledge accumulated by the Wixárika people, the Wirikuta Defense Front (FDW) and all those advisors that are required for the conservation, restoration and preservation of Wirikuta and its zone of influence.

First Majestic Silver Corp., through its Mexican affiliate, Minera Real Bonanza, ceded to the Federal Government (not to the Wixárika people, nor the inhabitants of Wirikuta) a mining allotment of 761 hectares that corresponds to the concession of Minera Real Bonanza (Bonanza mining allotment fraction 8, title 234874, a concession for polymetallics). This is the same area that was offered in January 2011 and that the Wixárika people rejected out of consideration that Wirikuta is not only the Cerro Quemado (Burnt Peak), but is constituted by at least 140, 212 hectares in its integrity. The Real Bonanza lot fraction 8 is a sterile zone without economic mineralization and part of a zone that was not within the exploitation plans of First Majestic Silver Corp. In reality the company’s exploitation project remains untouched under the government’s scheme.

Another example of the lack of moral values held by First Majestic Silver Corp. is the constant lying and presumption of making judgments over the value of Wixárika culture and what it means.

Unfortunately, this does not represent under any vision a solution, but is merely a strategy to take advantage of the media coverage of the Wirikuta Fest and give a decomposed image of supposed social responsibility.

The road is long and we ask that the Mexican State maintain dialogue with the Wixárika people through their traditional, civic and agrarian authorities for the integral protection of the Sacred Territory of Wirikuta.

Finally, we reiterate that all mining concessions in the Natural and Cultural Reserve of Wirikuta becanceled, along with the agroindustrial activities that threaten the biodiversity of the land.

Regional Wixárika Council for the Defense of Wirikuta