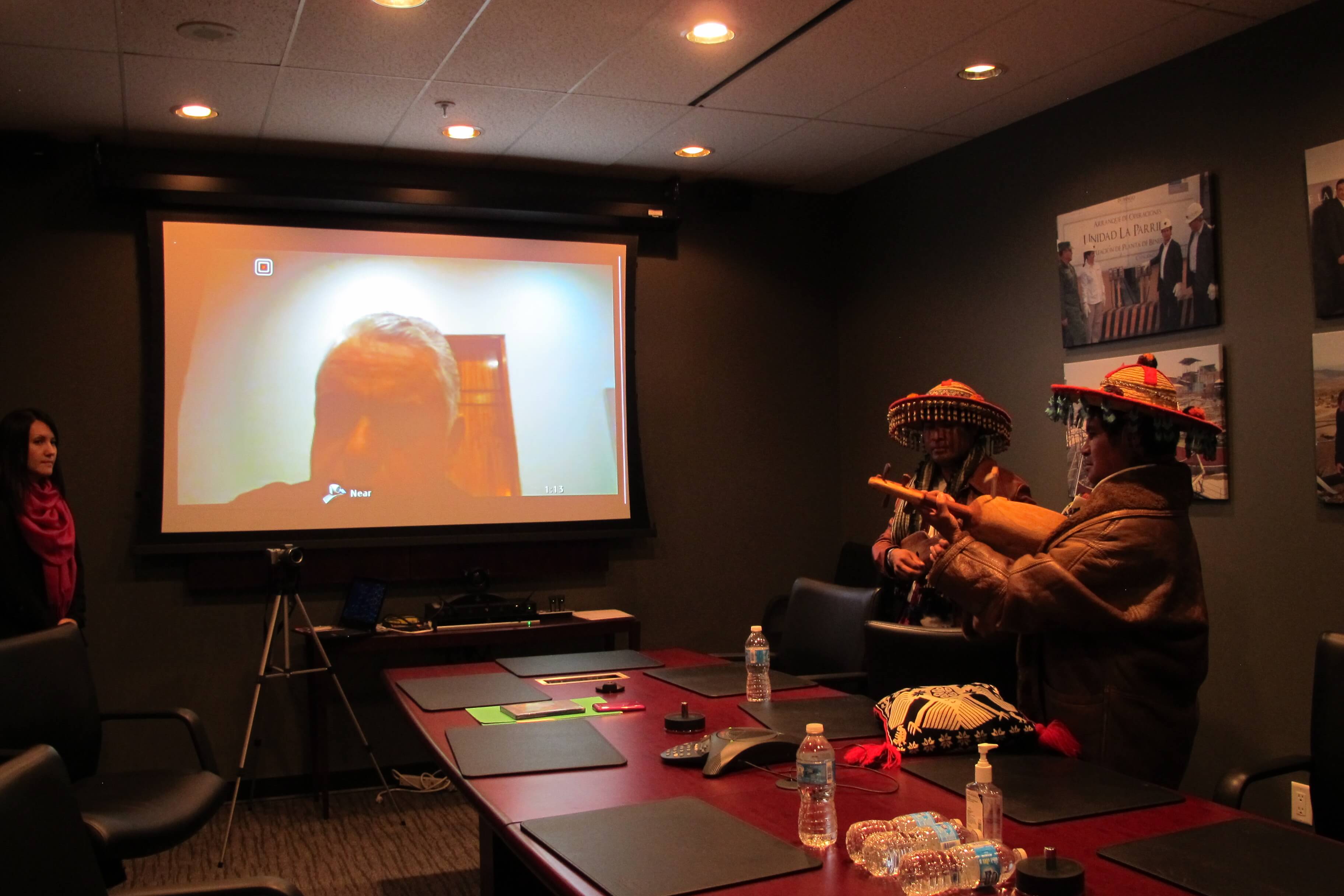 Salvador Garcia, Vice President of Operations at First Majestic Silver, attended the meeting from a Skype connection in Mexico, along with President Keith Neumeyer.
Support our journalism. Become a Patron!

VANCOUVER, B.C. –­– Members of the production crew for the film Huicholes: The Last Peyote Guardians delivered a powerful message from Wixarika (Huichol) traditional authorities Friday, revealing that another Vancouver-based mining company, IDM Mining LTD (formerly Revolution Resources) has abandoned plans to pursue a mining project in Wirikuta, the sacred land of the Wixarika people of Mexico, to which they have carried out their pilgrimages since time immemorial. The authorities provided new information regarding the dire situation with regard to water resources in the region and pleaded that First Majestic Silver Corp. follow the example of its competitor. 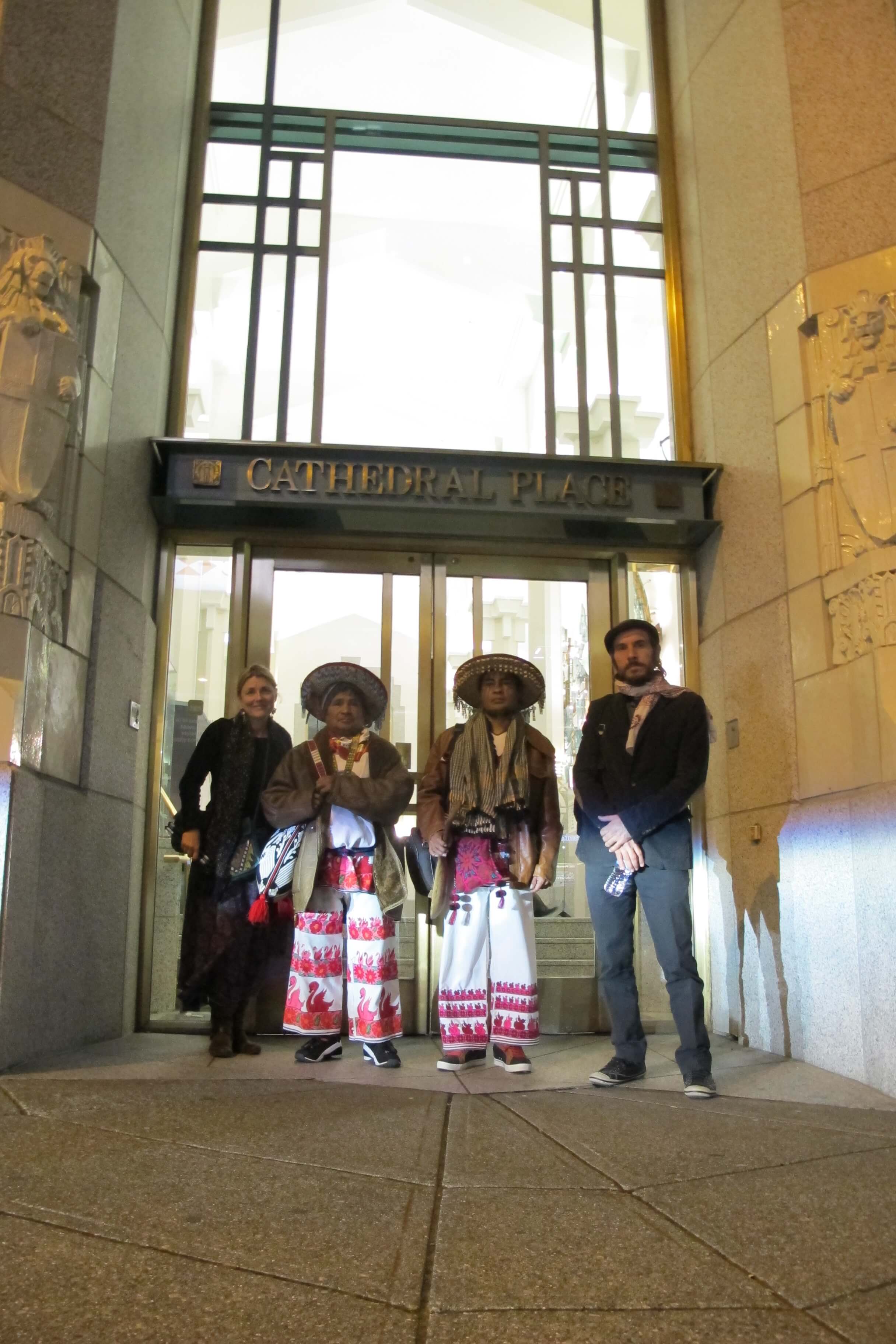 Huicholes North American Film Tour makes a stop at First Majestic Silver Corp. headquarters to deliver a letter from the Wixarika authorities and a copy of the DVD.

“We are pleased to be able to facilitate the communication between the Wixarika authorities and the leaders of First Majestic Silver Corp. in the context of our 20-city North American Film Tour,” said Hernan Vilchez, director of the film. “We believe that as the public has come to know the details of this case, they have made their wishes known, and we are pleased that IDM Mining has wisely chosen to bow to the public opinion.”

The letter was delivered to the film crew on the eve of their journey to Vancouver to present the film at British Columbia University, Simon Fraser University and Dogwood Centre in three public screenings and discussions. Accompanying the film are Vilchez and two Wixarika marakate or shamans who are protagonists in the film, José Luis “Katira” Ramirez and his son Enrique Ramirez.

The elder Ramirez, who along with his son serves as a spiritual guide for his people, stated: “For us it is a great honor, both to be received in this way by First Majestic President Keith Neumeyer, and to receive this message from the leaders of our people. It is not easy to be in this place, but we are praying for solutions, and we wish President Neumeyer a cordial salute, a long friendship and no problems.”

Salvador Garcia, Vice President of Operations at First Majestic Silver, attended the meeting from a Skype connection in Mexico, along with President Keith Neumeyer.

The letter from the Wixarika authorities emphasized the fragile nature of their sacred desert and the urgent importance of its preservation for the ongoing cultural survival of the Wixarika people, one of the tribes that have most successfully maintained its ancient spiritual traditions.

“We want to emphasize to you, First Majestic Silver Corp. shareholders, that the entire Universo Project – which was ongoing inside of Wirikuta, run by the Canadian company Revolution Resources – was totally cancelled by withdrawal of the company, probably because they decided to quit when they realized how problematical it is and will be to destroy a place with such a spiritual power as is Wirikuta,” the Wixarika authorities wrote in an official letter to First Majestic Silver President Keith Neumeyer, president and CEO; to Todd Anthony, director of investor relations; and to the members of the public. “Step back, renounce to your project of death and act in favor of life. Our people are defending life; we pray, we fast and we keep a vigil for our Mother Earth, for our older brother, the Híkuri-Venado, for our origin that is our present and also the future for all of our people.” 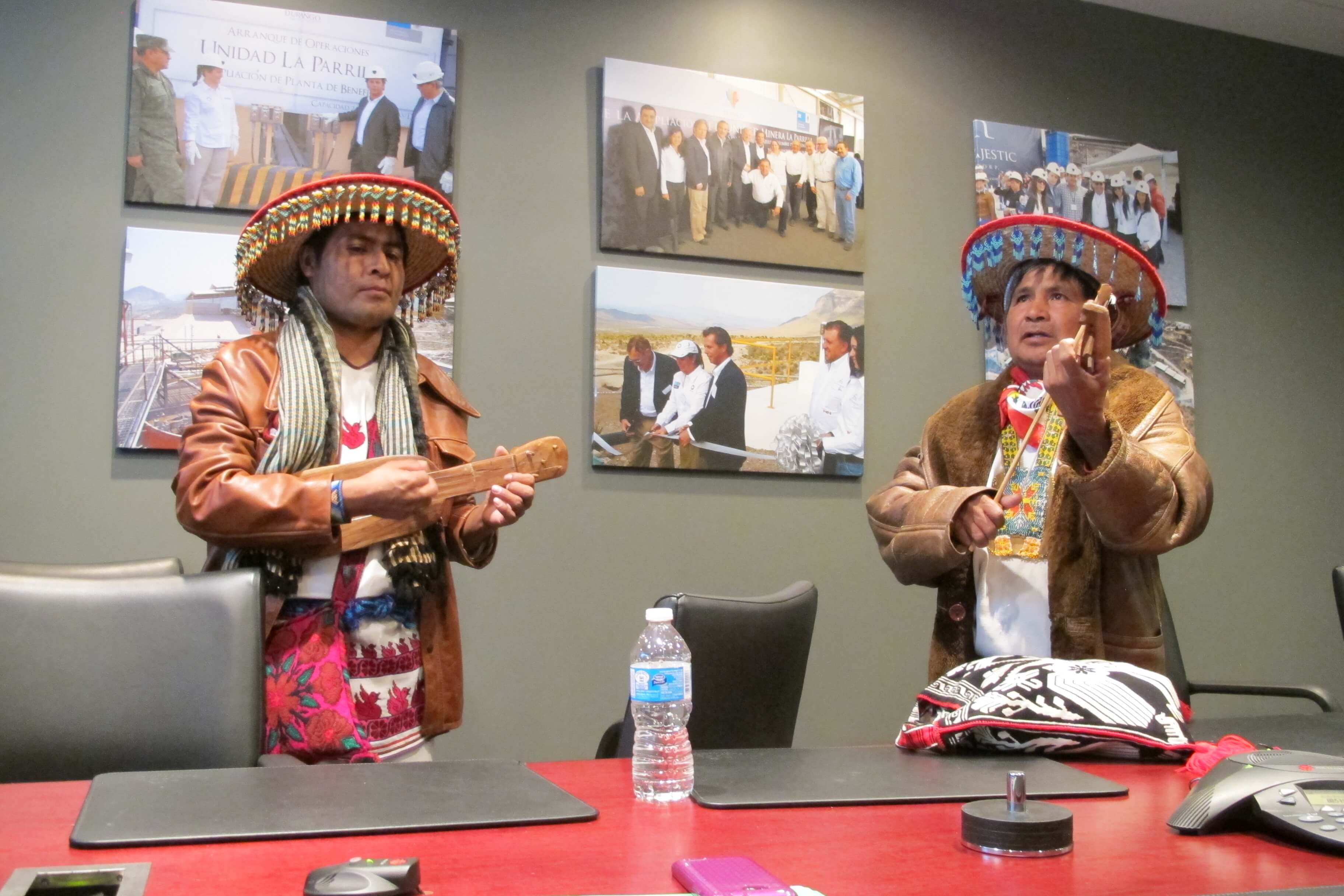 Enrique Ramirez, left, and Jose Luis Ramirez deliver a musical message to the management of First Majestic Silver Corp. at their headquarters in Vancouver.

The Wixarika authorities also shared that the 3 aquifers in the zone are currently over-exploited by 2 million cubic meters per year, and that is without mining activity. “It is impossible to give even one more water concession, Moreover, it is a strong aggravating fact that the main silver vein that Project La Luz intends to exploit is placed at the same level as the groundwater layer. That guarantees that the water is going to be polluted, since it is impossible to leave it untouched while extracting tons of rock, dirt and water at that level to be able to work.”

A full text of the signed and sealed letter is attached, along with its English translation.

Huicholes: The Last Peyote Guardians has been packing venues throughout the Western U.S. and Canada since it began its six-week, 20-city tour on Nov. 5 in Houston. After its Vancouver presentations, the tour will spend a week in Arizona and another week in Northern California. It won Best Documentary Film by the Red Nation Film Festival, the premier showcase for Native American and Indigenous film in the United States.

Nov 29 – Dogwood Centre – “What are we doing to care for our world’s life?” Community Dinner and networking with organizers – 3 to 8 pm