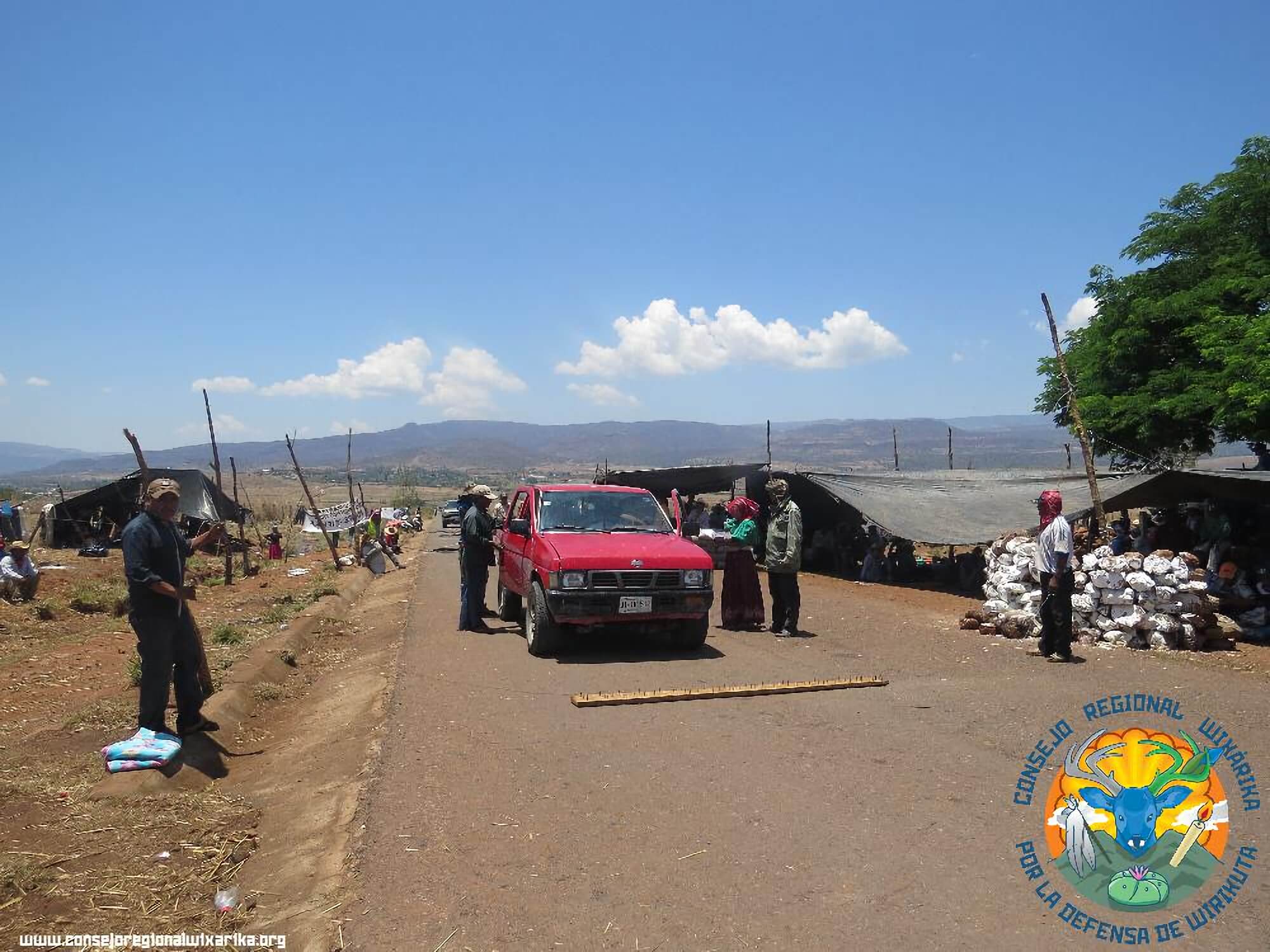 MESA DEL TIRADOR, Wixárika territories, Mexico — At midnight on May 10, 2018, members of the Wixárika (Huichol) community of Wuaut+a (San Sebastián Teponahuaxtlán), in the Western Sierra Madre of Mexico, took the dramatic step of blocking all entrances to their community, given the lack of response from the Mexican State for their demand to peacefully receive the lands that they have won from the ranchers of Huajimic in agrarian lawsuits.

Meeting in assembly in the Wixárika town of Mesa del Tirador, a few kilometers from the mestizo village of Puente de Camotlán, the communal and traditional authorities, together with the Regional Wixárika Council, declared in an official communiqué: “Today’s deadline for President C. Enrique Peña Nieto to appear before the community of Waut+a, was indicated in the Historical Statement made in Amolera on April 29 of the present year.

In the control and surveillance post located in Mesa del Tirador, there is a group of 400 Wixaritari guarding the access in order to prevent passage by political operatives or others who have to do with the electoral processes; likewise we are seizing all electoral propaganda material.” 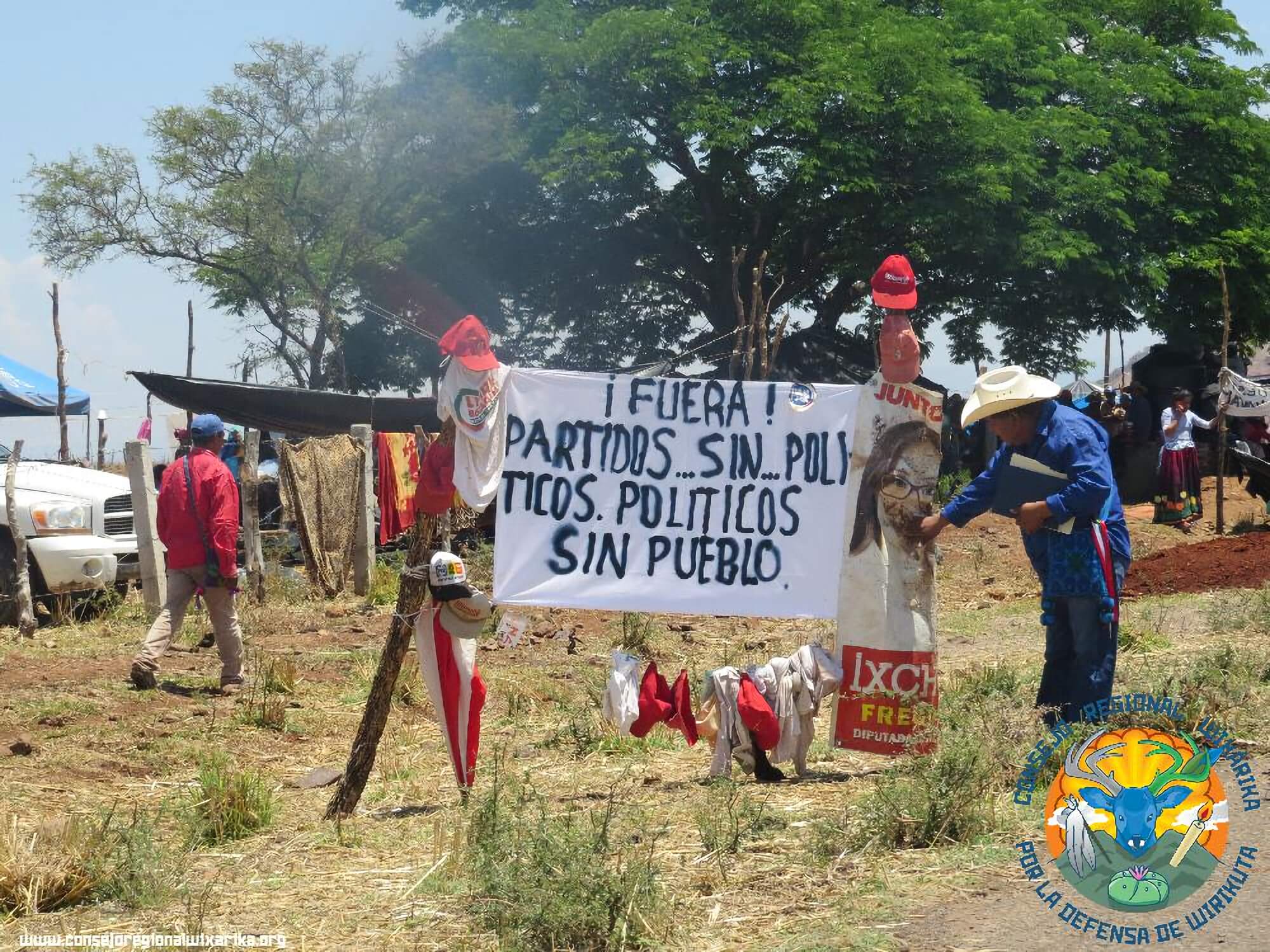 “Get out! Parties without politicians… Politicians without the People.” Mobilization in Mesa del Tirador expresses the frustration of Wixaritari with the political system. More than 7,000 Wixaritari from the community of Wuaut+a will not vote unless the situation regarding the return of ancestral lands from Huajimic is resolved. (Photo courtesy Wixárika Regional Council)

Three more roadblocks have been set up; one in Cerro de la Puerta, one in Las Cañadas (Banderitas or El Miguelón), and a third in El Pacheco. “The demand of the Wixárika community is a solution to the agrarian and border disputes between the states of Nayarit and Jalisco. The community demands that the President of the Republic present himself at the point where the state limits are located, at the limits of the two different worlds, If he fails to show up by the stated deadline, at 11:59 pm, the four surveillance posts will close the two roads to the general public: the Tepic-Aguascalientes highway (Mesa del Tirador-Las Cañadas), and the Carretera Huejuquilla – Amatitán (Cerro de la Puerta and El Pacheco). There will also be 35 schools closed, from preschool, primary and secondary, until the executive presents himself in the community of Waut+a; otherwise, will not vote on July 1 of 2018.”

The deadline passed without any government response, and the Wixárika closed the roads and the schools as promised. More than 7,000 Wixaritari from the community of Wuaut+a will refuse to vote, and they will block installation of the voting booths in the community.

“We are not going to give more votes to the political system we have in Mexico. I believe that all Mexicans no longer feel represented; we have a failed state, we have the absence of the rule of law and I think that it is not only the Wixaritari, who are suffering these legal failures in the Mexican State,” said Ubaldo Valdez, commissioned spokesman for the Surveillance Committee of Mesa del Tirador, Bolaños.

Despite the presidential absence, yesterday a meeting was held in Mexico City among representatives of the Ministry of the Interior, the Secretariat of Agrarian, Territorial and Urban Development, and the Secretaries of the Government of Jalisco and Nayarit (see below). They requested three days of extension for the community members for the next step of the protest, but the community assembly refused.

The consequences of a total closure to the circulation of the roads will have a significant economic impact, since they comprise the commercial routes between the Sierra of Nayarit and the Zacatecan highlands, and between the Bolaños canyon towns and the northernmost zone of Jalisco, Huejuquilla and Mezquitic.

“Many are looking at the the possibility that the community provide its own supplies, but it sounds complex because there are 36 main localities and it is a very vast territory and badly connected,” said one observer of the meeting.

The precedent of this dramatic measure was the action taken by the residents of Tuapurie, or Santa Catarina, another of the principal Wixárika communities, who closed the schools of the community for more than a month and blocked roads, until they were visited by the governor of the state, Aristóteles Sandoval, on October 31, 2017. In that case, there are demands for basic services, such as health and education, which are also part of the demands of Wuaut+a, whose central component is the return of their ancestral lands in Huajimic.

For the background on this ongoing land recovery struggle for the restitution of 10,000 hectares of ancestral Wixárika lands, see IC’s previous coverage on the issue.

Representatives from the Ministry of the Interior (Segob), the Secretariat of Agrarian, Territorial and Urban Development (Sedatu), the National Commission for the Development of Indigenous Peoples, the Ministry of Finance and Public Credit and the Secretariats of the Government of Jalisco and Nayarit, met Wednesday in the capital of the country to determine the solution to the Gordian knot of the compensation to Huajimic landholders, the losers of the agrarian lawsuits in favor of the indigenous community of Wuaut+a.

Aldo Saúl Muñoz López, magistrate of the executing court, Agrarian Tribunal 56 of Tepic, told MILENIO JALISCO that during the past few days he had asked for reports of the files, but had not received until Wednesday night the expected call about the final route of money to defuse the conflict in the Sierra.

For his part, Roberto López Lara, secretary of the Government of Jalisco, published in his Twitter account: “In the case of the community of San Sebastián Teponahuaxtlán, a working group was set up where @SEGOB_mx, @ SEDATU_mx, @SHCP_mx and the states of Jalisco and Nayarit participated to follow up on the trial carried out by residents of this area.”

At the same time, the conflict in San Andrés Cohamiata, another northern neighbor of Wuaut+a, was addressed. The community has been threatened with territorial division to favor mining interests protected by Nayarit. “… between the @GobiernoJalisco and @NayaritGobierno, we recognized through an agreement, the integrity of the territory, the uses and customs of the Wixárika community of San Andrés Cohamiata”.

The next judicial executions in favor of Wuaut+a are scheduled by Agrarian Tribunal 56 for May 23 and 30, 2018.