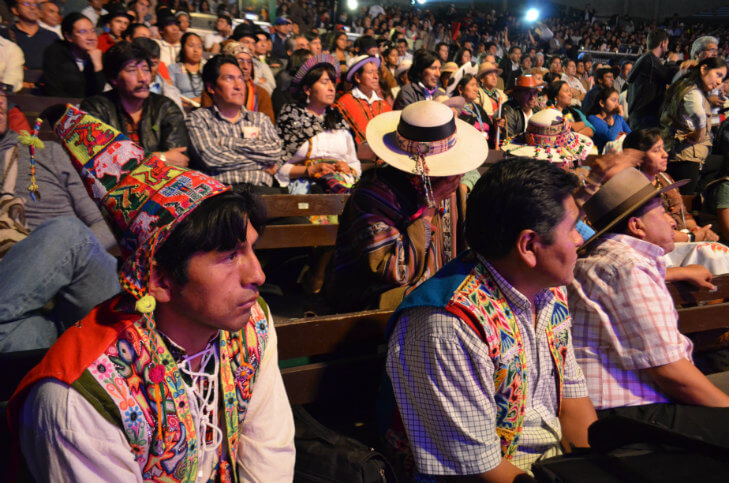 Without Respect for Indigenous Rights, There Will be No Solution to Climate Change: Report from Lima

The People’s Summit on Climate Change began with a strong indigenous presence with a message to the world: humanity is going through a crisis of civilization, on an exhausted planet where we can no longer tolerate the biological illiteracy of those do not know how to read life.

In the afternoon, the opening ceremony of the summit showcased the wealth of artistic expressions of indigenous peoples of the continent, its cultural diversity and political differences.

But one idea carried through discussions at the tables, panels, forums, debates, hearings, conferences, workshops, and more than 50 activities on the first day of the summit–-solutions to the climate crisis must fully recognize of the rights of indigenous peoples.

Carlos Perez, indigenous Ecuadorian, said, “We are 370 million indigenous people in the world; we represent only 5 percent of the global population. We hold a little more than 10 percent of land on the planet, but we are the stewards; we are guardians of more than 90 percent of global biological diversity.”

“For this reason we are making demands,” he added. “We did not come here on our knees to beg for change. We come to demand climate justice from China, the United States, Japan, the European Union; that they not offer band-aids and false promises, but rather once and for all that they pay the gigantic social, environmental and economic debt they owe to poor nations and indigenous peoples, for the ethnocide, genocide and destruction on the part of the industrialized countries.”

For indigenous peoples at the summit, climate change is caused mainly by the emission of greenhouse gases from industrialized countries. The impact is global, but mostly affects the poor even though they contribute least to the cause. This inexorable reality seriously harms indigenous communities and peoples worldwide whose productive, social and cultural practices have had a close and harmonious relationship with Mother Earth. Climate justice begins by recognizing this fact.

And it must respect, as the unity pact of indigenous organizations establishes, “the right to self-government, our own jurisdiction, legal security of our territories and ways of living, the “living well” model to ensure our very existence and as a preventive measure against climate change and global warming. ”

“Climate change poses the challenge of a new economic order and a new model of social life that is not based on profit and consumerism, with low emissions of greenhouse gases. Indigenous peoples have much to contribute in the challenge of tackling climate change, not only in mitigation and adaptation but also in the task of building a society of Living Well in harmony with nature.”

For Carlos Pérez, the new guise of colonialism is called extractivism. “We salute the women who come walking from Cajamarca to denounce the destruction caused by mining in their communities. This is an example of dignity and strength. These droplets of resistance will form an ocean. Extractivism has globalized and resistance must also become global.”

Perez says that in this struggle it is necessary to overcome old Eurocentric notions as right and left, which come from the French Revolution.

“There is no difference between the Correa government and the government of Mexico–both are extractive. In that sense, there is no difference between the government of Evo Morales and Ollanta Humala, which is why indigenous peoples have to go beyond the left and right, also beyond colonialism. We must recover the true Sumak Kawsay (Living Well, in Quechua), community and love of Pachamama (the earth). The world will live without us; we cannot live without the world. ”

There is currently a process of pulling all of life into the financial sphere that is part of a radical intensification of capitalism as neocolonialism, participants in the meeting asserted. Indigenous peoples and traditional communities are the most affected by this perverse logic that transforms nature into commodities and aggravates social inequality.

Indigenous peoples proposed a way out by opposing capitalism, which is the basic engine of global warming. They proposed Living Well, the sustainability of life as opposed to commodification, food sovereignty and sustainable family farming as opposed to agribusiness.

These ideas also echoed in the brief but numerous messages presented in the inauguration of the Summit, following a colorful ceremony in which indigenous women represented the life cycles of Mother Earth to more than a thousand people in the amphitheater of Exposition Park.

When Susana Villarán, the mayor of Lima, spoke, a dozen young people with a megaphone and banners protesting the participation of politicians in the Summit mounted the stage to block her but were shoved off.

Pato Chavez, a spokesman for the youth of Yasunidos, said that they came to the Summit of Peoples to give the message that the only real way to stop climate change is to leave the oil in the ground, and that the summit must be for and by the people, without the presence of governments.

“We are a collective of collectives in Ecuador, started over a year ago, when the initiative not to exploit oil in Yasuni was abandoned,” he said, adding that President Rafael Correa reversed himself on the project.

The organizing committee of the summit issued an apology that called the disruption an act of vandalism, and stated, “The subjects acted disrespectfully and unexpectedly, motivated by particular interests that sought to break the spirit of unity of the event”.

Out of the long list of speakers one young woman stood out. She asked the audience to count to 43, in memory of the Ayotzinapa students tragically ‘assassinated by the Mexican state’, and for all of the men and women killed and repressed for defending natural resources.