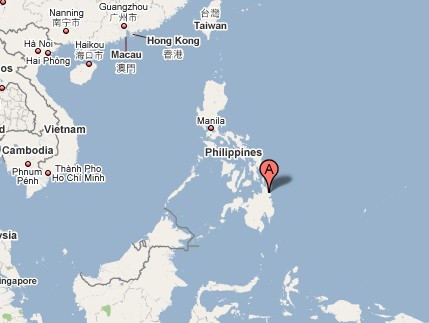 The Mamanwa previously sent notices of termination to the companies, informing them that they will longer be permitted to mine their ancestral territories because the companies have never paid them any royalty fees.

Under the Indigenous Peoples Rights Act (IPRA), Indigenous People in the Philippines are entitled to “a royalty payment… which shall not be less than 1% of the Gross Output of the mining operations in the area.”

Only recently has the Mamanwa learned of this.

In a statement dated February 4, day seven of the barricade, Datu Joel Buklas from the Taganito Mamanwa Association, notes that TMC has been operating in the region since the 1960s, and recently “got a new contract to operate for another 25 years in the red mountain of Surigao del Sur.”

“The moving truck loads of nickel ore is a regular scene for motorist passing along the Claver highway.”

“This is our land even before these mining companies came, we were already here, we were forcibly ousted from these lands against our will and we hope concerned government agencies whom we have been asking for years will wake up.”

“Today, 4 February 2009, is our seventh day of human barricade along the highway of Taganito, Claver, Surigao del Norte to demand before the National Commission on Indigenous Peoples (NCIP) on our share agreed for allowing the mining companies to ruin our lives and our ancestral domain.”

With the blockade still standing, the Mamanwa report that five of their carpenters, who helped put the blockade together, have been missing since they left the site to harvest food for the protesters on January 29.

Nobody knows what happened to them, however the Mamanwa point out that in December they informed the Philippine National Police, the local government and the NCIP that a blockade was in the works – “after repeated attempts of sending out notices of termination of mining operations as well as demands for just compensation proved futile,” says a February 12 statement from the Legal Rights and Natural Resources Center – Kasama sa Kalikasan/FOE- Philippines (LRC-KsK).

The LRC-KsK is calling upon the Arroyo government “to exert all its efforts in locating the five IP protesters and put to justice whoever caused their disappearance,” and that “the Arroyo government do away with its obsession for mining generated revenues in the face of overwhelming rejection of IP communities who have long borne the brunt of the destruction, displacement, discrimination and disempowerment that mining operations bring with it.”

They also request that people take a moment to Call on the government:

You can send your appeals to:

The Chief of Staff (Armed Forces)
Gen. Alexander B. Yano
Chief of Staff, Armed Forces of the Philippines
Email: via website: http://www.afp.mil.ph/ghq/csafp/index.htm (follow link on left-hand side to guestbook)

The Chairperson of the Philippines Commission on Human Rights
Email: drpvq@chr.gov, atty_delima@yahoo.com

The Chairperson of the National Commission on Indigenous Peoples
Atty. Eugenio A. Insigne
Email: resource@ncip. gov.ph