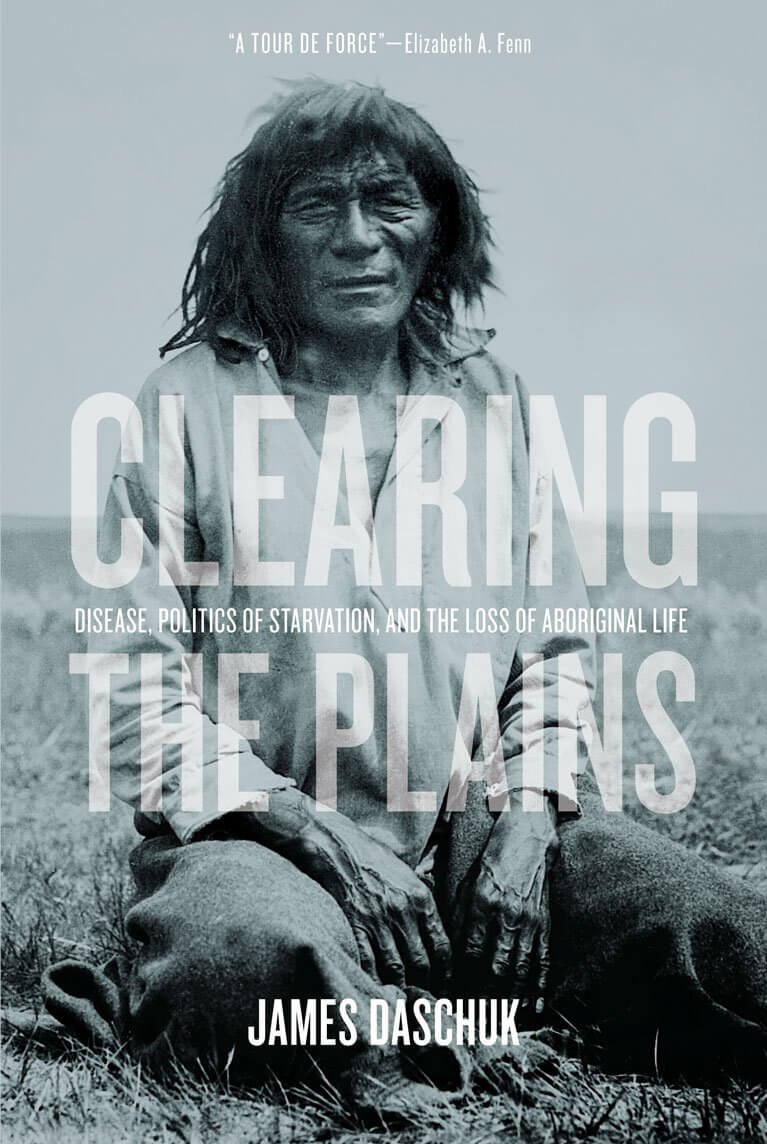 The Wipe-Out of Canada’s First Nations

The sad, depressing reality chronicled in James Daschuk’s tour de force, Clearing the Plains: Disease, Politics of Starvation, and the Loss of Aboriginal Life—describing the extermination of Canada’s First Nations—is the mirroring American readers will observe the same situation in the United States.  The clichéd expression of “the vanishing American Indian” is no figment of one’s imagination but the result of centuries-old policies of racism, greed, and the march of Western civilization into the North American continent, with little or no regard for indigenous peoples, the rightful owners of the land. Perhaps the most startling figure in a book replete with shocking details is the speculation, made fifty years ago, that “the indigenous population of North America at contact with Europeans might have been 90 million people.”

That’s actually part of the opening sentence of Daschuk’s book and although he admits that there are many people who question that figure, even if it was half that number, we are talking about a truly horrendous Holocaust.  Again, although the figures are not precise, the United States has 2.9 million Native Americans today and Canada’s Indian population is one million, but people counted today in both of those categories include many with mixed-ancestry. Ignoring the ninety million figure, Daschuk adds in that opening paragraph of his book, “scholars would probably agree that the severity of population decline and the suffering unleashed on the indigenous people of America were unprecedented….”

Most of us are familiar with part of the story: disease, starvation (game depletion), broken treaties, alcohol—not a pretty list of causes.  Nor does Daschuk deny the fact that North America was a “disease-free paradise before the arrival of Europeans.”  It wasn’t.  There was even an indigenous form of TB likely to bring death to native peoples, but not the virulent form they encountered after European arrival.  But the list is much more extensive than TB: smallpox, whooping cough, measles, syphilis, influenzia, scarlet fever, and, of course, alcohol which is not a pathogen but did its own number on people with horrendous results.  What Daschuk provides in his study is specific examples for given locales, such as the initial infection of smallpox in some communities: seventy percent.  One lengthy paragraph will explain the context:

“Arrival of the French in [Portage la Prairie], the transportation corridor east to New France, and contact through cooperation and conflict over access to resources created the ecological conditions that sparked the virgin soil epidemic of smallpox along the boundary waters and interlaces of Manitoba.  Within a decade, the regional map would be fundamentally and permanently altered in the aftermath of disease.  Historical geographer Paul Hackett traced the origins of the epidemic to a ship that unleashed the pathogen in Boston in 1729.  From there, it spread through the English colonies, eventually arriving in Montreal, where it killed 900 people. For smallpox to have spread halfway across the continent, certain criteria had to be met. Without large urban centres in the interior, and with vulnerable populations dispersed across a vast region of the eastern and central woodlands, the virus needed speed to remain viable; the human hosts who served as unwitting carriers of the virus must have travelled swiftly.  The incubation or prodromal stage of the disease lasts from nine to sixteen days after infection.  Those who carry the germ become infectious between thirteen and twenty days after inhalation of the virus, and the disease is spread through the exhalation of infected individuals.  According to historian Steadman Upham, ‘The total infection period can last a little more than three weeks (a mean of 26.75 days) and terminates with either the patient’s recovery or death.’  It has long been recognized, however, that the smallpox corpse is a potent and continuing source of infection.”

Equestrianism sped up the process, quickly transferring the disease into the interior regions. “By the first half of the eighteenth century, smallpox had brought fundamental change to the demography of First Nations across western Canada.” Later in the century, in addition to all the diseases, there were skirmishes between traders and native peoples, provoked by the trade in beaver skins.  Alcohol was the lure.  By 1780, entire cultural entities had ceased to exist. Hunger would follow shortly because of the unstoppable settlement of Europeans.  The large game was depleted.  More Europeans entered the land during the gold rush, mostly leading to additional pathogens killing native peoples.  By the end of the nineteenth century there was a general agreement that diseases had been spread “purposefully.”

Then the treaties began, with the disappearance of the bison, starvation, and recurrent TB brought by Texas longhorn cattle into the northern areas.  Another telling quotation: “Studies of skeletons have shown that, in the mid-nineteenth century, peoples on the plains were perhaps the tallest and best-nourished population in the world.  By the early 1880s, the nutritional advantage provided by the herds would be gone for good.” The recently subdued peoples on the reservations were typically denied sufficient rations by dishonest contractors working for the Bureau of Indian Affairs.  As the government “provided inferior, tainted food, appalling death rates continued.”  Even prostitution became a problem as many native women used their bodies to secure food. On the reserves, a pass system was implemented, designed to keep native peoples in their areas, but resulting in a form of incarceration.  “The pass system, ‘perhaps the most onerous regulation placed on the Indians’ after [a rebellion in Winnipeg], was implemented to limit the mobility of treaty Indians, keeping them on their reserves and away from European communities.”

Daschuk concludes, “The decline of First Nations health was the direct result of economic and cultural suppression.”  No surprise that “The gap between the health, living conditions, and other social determinates of health of First Nations and mainstream Canadians continues as it has since the end of the nineteenth century….  Even such basics such as clean drinking water remain elusive for some communities.”  Substitute the United States for Canada and you fill in the picture.  I don’t even want to get into the question of which nation has treated its First People worse.

James Daschuk: Clearing the Plains: Disease, Politics of Starvation, and the Loss of Aboriginal Life

Charles R. Larson is Emeritus Professor of Literature at American University in Washington, D.C.  His many books include American Indian Fiction.  Email: clarson@american.edu.