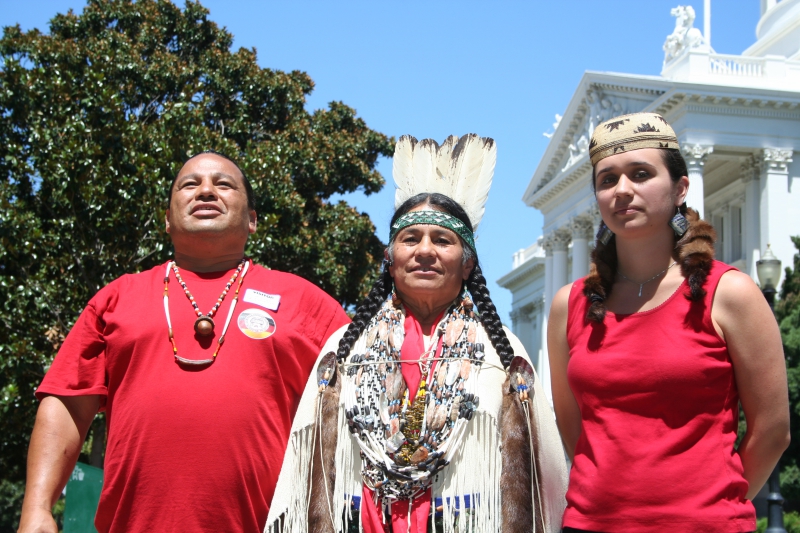 Caleen Sisk, Chief and Spiritual Leader of the Winnemem Wintu Tribe, said the Tribe strongly opposes the tentative approval of genetically engineered salmon by the Food and Drug Administration (FDA).

“Salmon is in our traditional stories, songs and dances,” said Sisk. “We must stay pure to exist in the ancient circle connecting our tribal customs to salmon. The Winnemem Wintu have a right to protect salmon, and certainly NOT allow them to be genetically modified in anyway. They must not have their genes and DNA subject to exploring ideas.”

“It must be recognized as an inherent right of Indigenous Peoples for the Winnemem Wintu to hold the salmon as a relative that is so intrinsic to our culture. There are complete eco systems based on the clarity, knowledge and health of the salmon,” said Sisk.

“The Winnemem Wintu object to GE production, as it would certainly impact our obligation to salmon and would change the traditional responsibility to salmon and our relationship that exists for thousands of years. It is also the right of the tribes to expect the same engagement of the omega 3’s to maintain a quality of health to traditionally exchange with the Winnemem Wintu, the trees, birds, animals, plants and soils as they purify the waters on each of their once in their life journey,” she concluded.

Sisk urged people to tell the FDA to stop the frankenfish by going to the Food and Water Watch website and sending a letter: http://www.foodandwaterwatch.org/food/genetically-engineered-foods/stop-frankenfish/

The Winnemem Wintu Tribe, fishermen and environmental groups are currently fighting federal government plans to raise Shasta Dam, as well as the FDA’s approval of Frankenfish. The dam raise would result in the flooding of many of the Tribe’s sacred sites.

The dam expansion, planned in conjunction with the construction of the Governor Jerry Brown’s peripheral tunnels, would also lead to the extinction of Central Valley salmon, steelhead, Delta smelt and other imperiled fish species.

The Tribe is also working to bring the original strain of winter run chinook salmon, now thriving on the Rakaira River in New Zealand, back to the Tribe’s ancestral river, the McCloud, above Lake Shasta.

During the Social Justice, Real Justice Conference at the University of Oregon, Eugene from February 14-16, Chief Caleen Sisk led a workshop and showed a new film on the struggle to carry out the Tribe’s Coming of Age Ceremony. She also participated in a panel, in collaboration with Winona LaDuke, Dania Colegrove and Analia Hillman, entitled “Environmental Justice and Human Rights on the River.”

For more information about the Winnemem Wintu Tribe, go to: http://www.winnememwintu.us

AquAdvantage salmon is the trade name for a genetically modified Atlantic salmon developed by AquaBounty Technologies. This “Frankensalmon” has been modified by the addition of a growth hormone regulating gene from a Pacific Chinook salmon and a promoter gene from an ocean eel pout to the Atlantic’s 40,000 genes. These genes enable the “Frankensalmon” to grow year-round instead of only during spring and summer, thus increasing the speed at which the fish grows.

The FDA made the finding in spite of a petition from conservation groups requesting that it complete a comprehensive environmental impact statement on the risks GE fish could present to the natural marine environment.

Earthjustice filed that petition in May 2011 on behalf of the Ocean Conservancy, Food & Water Watch, Friends of the Earth, Center for Food Safety, the Center for International Environmental Law and Greenpeace.

“FDA’s narrow analysis fails to seriously consider the risks these genetically engineered fish could pose to our natural environment,” said Earthjustice attorney Khushi Desai. “If these fish mix with wild salmon, the ecological harm could be devastating. This genetically engineered fish puts the entire US salmon industry at risk, and most importantly it could threaten the very survival of our native salmon populations.”

The finding occurs as the Obama administration is continuing and expanding some of the worst environmental policies of the Bush administration, including exporting record amounts of water out of the Delta, killing record numbers of fish at the Delta pumping facilities, supporting the raising of Shasta Dam and promoting the privatization of the fisheries through the “catch shares” program. (http://www.alternet.org/environment/despite-dubious-evidence-safety-you-may-soon-be-eating-unlabeled-genetically-engineered)