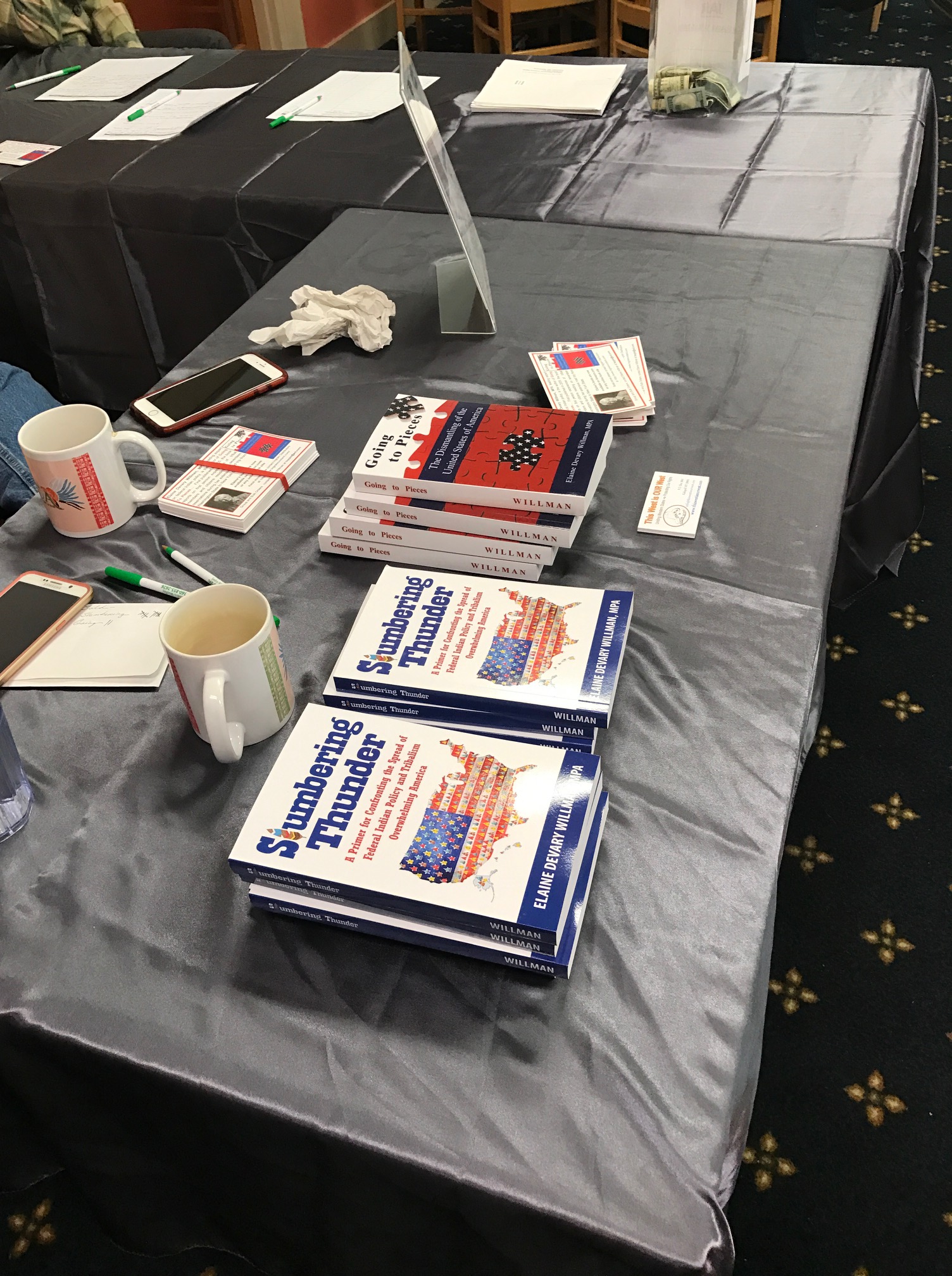 The current understanding of ‘hate groups’ excludes those who undermine tribal rights and sovereignty.
Table displaying Elaine Willman’s two books for sale during her May 20, 2017, workshop held in Sedro Woolley, WA.
Support our journalism. Become a Patron!

This weekend, anti-government activists will converge on Whitefish, Montana, for the “New Code of the West” conference — a symposium catering to Western conspiracy theorists and extremists. Speakers range from Ammon Bundy, leader of the 2016 Malheur National Wildlife Refuge occupation in Oregon, to state legislators Montana Rep. Kerry White and Washington Rep. Matt Shea. Also present will be Elaine Willman, a board member and former chair of the Citizens for Equal Rights Alliance (CERA), whose mission is “to change federal Indian policies that threaten or restrict the individual rights of all citizens living on or near Indian reservations.” The national group, with board members in Montana, New Mexico, Arizona, California and Washington, has declared that treaties regarding land and water rights are no longer valid, advocated for state rights at the expense of tribal sovereignty, and repeatedly sown distrust between non-Natives and tribal governments on issues like taxation, voter fraud and land use. CERA, which calls tribal sovereignty a “myth,” works to undermine forms of self-determination — foundational issues for tribal nations that have borne the brunt of violent U.S. expansion for centuries. 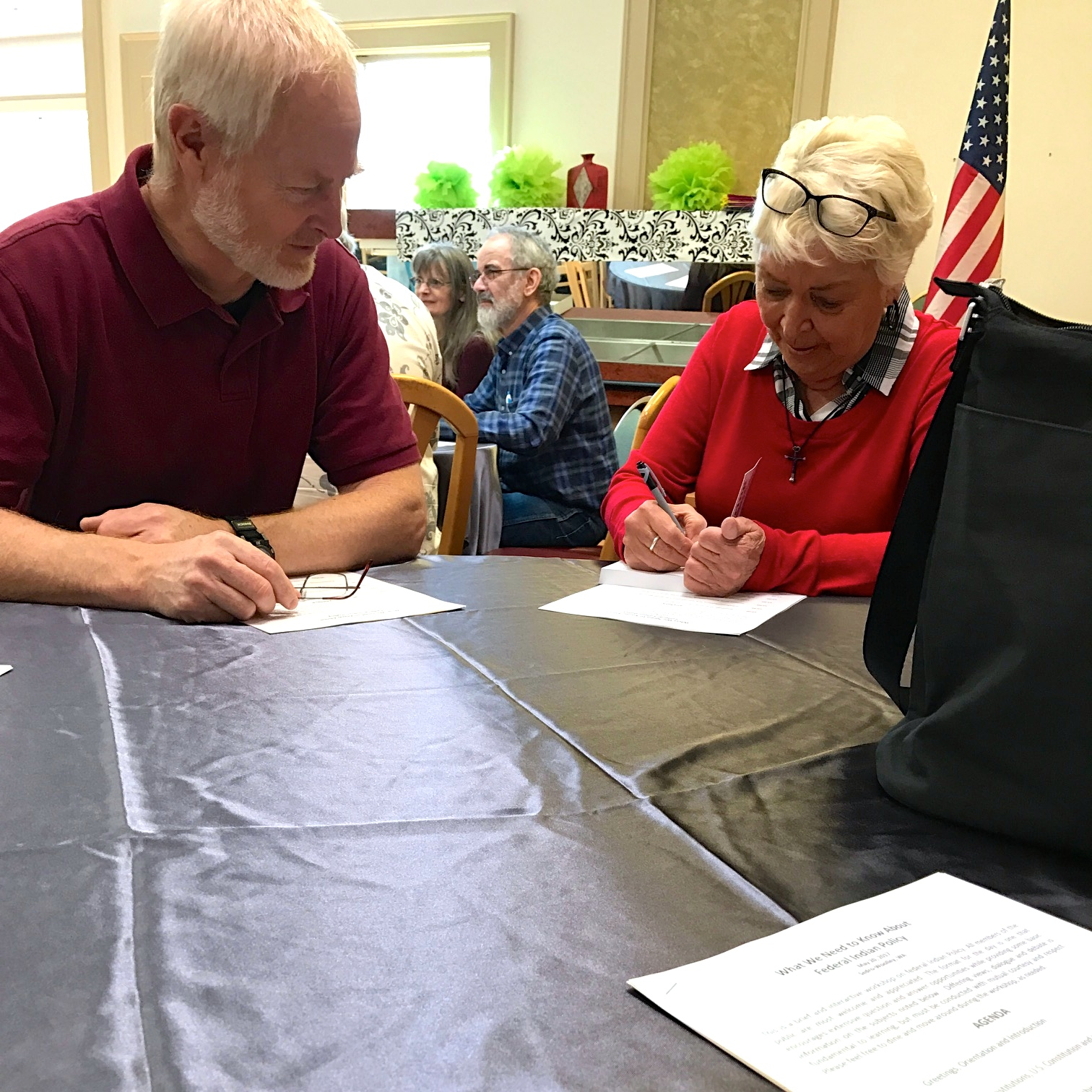 Elaine Willman autographing her book for an attendee, at her May 20, 2017, workshop held in Sedro Woolley, Wa.

Tribal leaders and organizations like the National Congress of American Indians have denounced CERA for supporting policies that undermine tribal rights and would further assimilate Indigenous people. “CERA uses false stereotypes to create turmoil, divide communities, and undermine tribal governments,” Montana state Rep. Shane Morigeau, a member of the Confederated Salish and Kootenai Tribes, told the Montana Human Rights Network. “Now, CERA is aligning with anti-public land radicals to try and spread their hateful message.” Willman disputes the characterization that CERA is anti-American Indian, but rather “anti-federal Indian policy.” On its website, CERA states: “We do not tolerate racial prejudice of any kind. We do not knowingly associate with anyone who discriminates based on race.”

However, a July report by the Montana Human Rights Network argues that CERA, along with other anti-American Indian groups, such as Upstate Citizens for Equality and Proper Economic Resource Management, should be labeled hate groups for their multifaceted attempts to reduce Indigenous political power while promoting racist stereotypes. Willman calls the network’s labeling of CERA as a hate group “absolute trash,” but says that the network does always quote her accurately. “There’s no one at that event who holds hate in their heart,” Willman says of the Whitefish conference. “The only ones who hold hate in their heart is probably the Montana Human Rights Network, and I think that’s sad. What a horrible way to think and live.”

Anti-American Indian groups have received little-to-no public scrutiny, compared to their anti-black and anti-Latino counterparts. Yet the number of hate crimes against Native Americans in 2016 was 4 percent nationwide, even though Indigenous people represent around 2 percent of the population. The Southern Poverty Law Center, a leading civil rights organization that monitors hate groups, does not include anti-American Indian groups in its annual accounting of hate groups, currently at 954 nationwide. A Southern Poverty Law Center representative told High Country News that they will examine whether CERA “fall in line with our hate group criteria as we work on finalizing our 2018 count.”

Advocates believe that Americans’ understanding of both civil and Indigenous rights affects their perception of anti-American Indian groups. Because groups like CERA say they advocate for “equal rights for all,” their deeper message often slips by unnoticed. Calling them hate groups, the Montana Human Rights Network argues, could help communities identify and resist their ideology. So, why aren’t they already considered hate groups? The answer lies in a combination of coded language, mainstream ignorance of Indigenous issues and long-embedded racism against Native Americans.

The Federal Bureau of Investigation defines a hate group as one whose primary purpose is to promote animosity, hostility and malice against people belonging to, among other things, a race or ethnicity different from the organization’s members. (Willman claims she is Cherokee, and CERA claims to have some Native members.) The Southern Poverty Law Center defines hate groups similarly, including “practices that attack or malign an entire class of people” for their “immutable characteristics.” For anti-American Indian groups, those characteristics can include Indigenous culture, religion, language and history. The Montana Human Rights Network has applied those definitions to such groups, saying in a 1992 report that groups like CERA constitute “a systematic effort to deny legally-established rights.”

Indeed, CERA has its own legal arm, the Citizens for Equal Rights Foundation, which files lawsuits and “friends of the court” briefs for court cases opposing tribal interests. In the past two years, those have ranged from land-to-trust cases in Massachusetts, to attacks on the Indian Child Welfare Act, to a case where tribes asked Washington state to fulfill its treaty obligations and remove salmon-blocking culverts. “No matter the issue,” says Travis McAdam, research director for the Montana Human Rights Network, “if American Indians are asserting their rights, these groups will be in opposition.” That, McAdam says, makes the difference between an anti-American Indian hate group, and one that expresses prejudiced, anti-American Indian sentiments.

Anti-American Indian groups also seek to influence the legislative branch. In 2015, at a CERA-sponsored conference, Willman told attendees that the bipartisan Flathead Water Compact in Montana was “a template for federalizing all state waters and implementing communalism and socialism” that was “aligned to spread tribalism as a governing system while eliminating State authority and duty to protect its citizenry.” Willman dismissed the Confederated Salish and Kootenai Tribes’ treaty rights and publicly challenged their sovereignty. Despite a lawsuit filed by two former and current Montana legislators, the settlement eventually gave the tribes control of Kerr Dam, making them the first tribe to control a hydroelectric dam.

These high-level conversations in government and litigation impact Native communities by altering public discourse. Researchers say a connection exists between inflammatory local conversations involving tribes and the disproportionate rates of hate crimes against Native Americans. Chuck Tanner, advisory board member at the Institute for Research and Education on Human Rights, has tracked anti-American Indian groups in Washington and elsewhere since the mid-’90s. “When these organized groups put forward these frameworks that distort and deny tribal rights and cast them as essentially taking from white people, that fuels these expressions of bigotry and violence,” he says.

That affects individual Native Americans, especially in places with a high number of non-Natives, like the Flathead Indian Reservation. Carolyn Pease-Lopez, a member of the Crow Tribe and a Montana state legislator from 2009 to 2017, remembers how CERA, and Willman, affected the discussion around the Flathead Water Compact. “They were going to oppose it, so they needed to hang their hat on something,” Pease-Lopez says. “And she gave them something to hang their hats on.” During the negotiations, Pease-Lopez was struck by the animosity from non-Natives, who felt that the compact was “going to give the tribe something that wasn’t rightfully theirs” — even though off-reservation water rights were not ceded in the original 1855 treaty. Throughout the process, Pease-Lopez heard many non-Natives complain that “they’re being left behind, and here are all these people skating through life getting things for free.”

A major point of the Montana Human Rights Network’s report is that these are more than talking points; they are an agenda at work. The “hate group” label relies on civil rights and an organization’s disregard for them. But there are flaws in that framework when it comes to categorizing anti-American Indian groups, because they exploit the language of civil rights in their names and rhetoric to bolster their motives and credibility. “They all try to pack equality into their titles and framing as much as possible, but it doesn’t change the fact that they’re a full-scale assault on tribal sovereignty,” says Tanner. As American citizens, Native Americans are afforded full civil rights. But there is an additional layer of tribal rights involved in tribal membership that the civil rights framework does not encompass. That can result in the erasure of those rights from conversation.

Tanner thinks that the “hate” designation may not be effective, because it reduces the conversation to psychology and emotion. That obscures the fact that these groups want to restructure political power to favor non-Natives over American Indians in Indian Country. Still, Tanner says, if we’re going to use the “hate” designation, anti-American Indian groups should be included. “They’re not as overtly racist as the Klan, but their endgame is the subjugation of tribes and the dismissal of tribal human rights.”

Because concepts like treaty rights and tribal sovereignty aren’t commonly understood by non-Natives, organizations like CERA can easily make inroads. A study released in June by Reclaiming Native Truth surveyed non-Natives and found that “limited personal experience and pervasive negative narratives” can “cement stereotypes” of Native Americans. The survey also found that “people who live near or work in Indian Country, especially areas of great poverty, hold bias.” McAdam says that’s how anti-American Indian groups are able to resonate: by melding concepts like private property rights and anti-federal sentiments with their own anti-Indigenous ideology. “There’s these frameworks out there, and organizations out there looking for opportunities,” McAdam says. “When there is an absence of knowledge to understand what’s going on, it’s people like Elaine Willman that show up and fill in that gap of knowledge.”

Pease-Lopez agrees, noting that nearly half of Montana’s 56 counties either border or contain a reservation, making education even more important. “It’s very subtle how they’re working their way in among our citizens. People could be supporting them or agreeing with them because of some points that are of concern to them, but they don’t realize their full agenda.”

Because “hate” is hard to define, anti-American Indian groups have gone mostly unnoticed in a culture built around subtle, consistent aggressions against Indigenous peoples. McAdam and others say this helps normalize their message in political discourse and opens easy lines of attack that are coded in legalese and rely on stereotypes. But ultimately, it damages the human rights of Indigenous peoples: their lands, histories and bodies. “It’s something we face every day,” Pease-Lopez says. “You almost have to have an outsider come in to say, ‘This isn’t normal.’ ”

This article was originally published by our media partner, High Country News. It has been re-published at IC with permission.