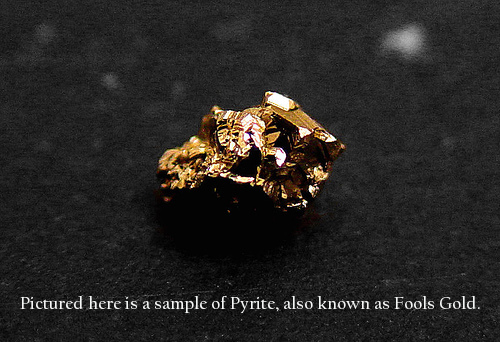 Well, it turns out the “media release” sent out by Rights Action on Tuesday, April Fools’ Day, was indeed a joke.

I was really hoping it wasn’t. In fact I was eager to applaud the Canadian mining company for pledging to take what would have been an near-unprecedented step… One that may very well have started a trend throughout the so-called business community.

So then, in part, I guess the Joke’s on me and anyone else who believed Goldcorp had the guts. But I don’t we’re the April Fool in this little funny. Now, that title is reserved for Goldcorp — and the government of Canada who invests in the company using the Canadian Pension Plan — and all the individual shareholders who comfortably sit in the dark, waiting to get paid.

Follow-up to the April Fools day “media release” from Goldcorp

We write in response to a large number and wide range of responses to the April Fools day “media release”. (Below, we include again the “release”)

We are glad it brought a smile to some. We apologize to those people who are upset that we did this. Below, we include a sampling of responses.

While the “release” was a joke, of sorts – fabricated for April Fool’s day – it was not written in jest. It was not a light-hearted, casual endeavour. We wrote it and distributed it in great seriousness.

The real joke in all of this, a bad joke, is on the people, communities and environment in places like the Siria Valley (Honduras) and San Miguel Ixtahuacan and Sipakapa (Guatemala). The real, bad joke is on people, communities and the environment in countless places across the globe who suffer environmental harms, who suffer the destruction of their local economies, who suffer a wide range of human rights violations (individual and collective) caused by a wide range of “development” projects (not just mining, but also hydro-electric dams, sweat shop industries, textiles, footwear, food production, tourism, etc) that are fundamentally exploitative and harmful, unequal and unjust in overlapping and complex ways.

The flip side of this bad joke is that the beneficiaries are the global company owners, shareholders and investors; are the consumers of all these products that are produced in such unjust, environmentally harmful ways; are the governments that promote (and sometimes use repression and military force to keep in place) this relentlessly unequal and unjust global “development” model.

Perhaps the comment from the “release” that got the most attention was: “Expressing contrition for earning so much money at the expense of other people’s alleged suffering and environmental harms, Telfer and MacArthur claimed it is not an issue particular to Goldcorp Inc., but rather that the global economic model that is at fault. They pointed out that for years they have been managing their global mining empire according to the laws and rules as they exist, and that they now suspect “it is the very laws and rules that are unjust and unfair.”

We believe this is the main point. From our work in Honduras and Guatemala, we believe Goldcorp is knowingly involved in a range of wrong-doing and we wish there were a political and legal system of enforceable accountability somewhere (any where, from the local to the global levels) that could be used to oblige them to pay compensation and reparations for the harms and human rights violations they have caused directly and indirectly, and benefited from. There is not. They are operating with effective impunity.

But, Goldcorp is acting not much differently than many global companies and investors (whether mining, tourism, hydro-electrics, food production, etc). They are pursuing an economic endeavour and profit-making mandate with the backing of their wealthy owners, shareholders and investors; with the backing of the consumers of their products; with the political and sometimes military-repressive backing of governments that approve of and support this international economic, “development” model.

And on and on.

It is an honor for us to work with so many of you, and with our friends and partner organizations in Guatemala, Honduras and beyond, in on-going serious (and sometimes playful) work so as to one day ensure that all of this was a bad joke, from sometime in the historical past.

Your comments, suggestions and criticisms are welcome. Also, we include, below, multiple email addresses for Goldcorp …

“Hi, I understand that George W. Bush today admitted that the war in Iraq was a “big mistake” and that he was “terribly sorry” for all the trouble that he had caused. In light of that, and the information that you sent us today, I am rethinking my position and applying for membership in the Republican Party. Guess we won’t need that delegation to Honduras after all. Happy April Fool’s Day to you, too.”

“After reading this press release twice, I finally got it, since never in my wildest dreams…. Thanks, it is brilliant!”

“Good one, got me. Only took me a second. Well, two seconds.”

“That was just mean … you totally got me.”

“BRAVO!!!! You’ve got to keep your sense of humor in these twisted times…. Perhaps all these years of corporate socialism have engendered some billionaire Bolsheviks at the top. Or, more likely, some corporate Stalinists. Hello to everyone in Guate!”

ONE WROTE: “If this is what you think is funny, just take me off your list.” WE RESPONDED: “There is nothing funny about the fact that North Americans have as yet to change our laws and policies that enable and support this type of global exploitation and abuse.” THE FIRST WROTE AGAIN: “of course there isn’t and i always read what you inform me about. I work for peace and justice locally and in Guatemala, so when I read about the “change of heart” of goldcorp, I believed it and sent it to a Guatemalan friend. then it dawned on me and I re read it and saw it was a joke. What you accomplish by sending out this kind of ‘joke’ is more than i understand. I guess I need to ‘lighten up’. But what Goldcorp does and all the other exploiters in La tin America and all over the world can’t be taken away by lightening up and it wastes my reading time. i also hate practical jokes.”

“If this was a joke I’m not laughing. … I hope I’m not overreacting but I could not see any humor in your note. My staff were actually shocked that Rights Action could be so cavalier about such an issue. We are not prudish here and certainly like to laugh but to make an April Fools joke out of people’s suffering is absurd. I’m sure you have been to Guatemala and have seen the devastation of multinationals like I have. I recommend you read the book “Bananas” which documents the long history of what United Fruit, Dole, and other multinationals did to all of Central American Indigenous people since the late 19th century. I am not trying to preach to you and I’m sure you didn’t think it through before the note went out, but for people like me it hit a nerve. Please take my criticism constructively as we live and learn in this changing world.”

“Ugh. I was so happy, then so sad. Good teaching tool. That it is not true is more sad than one can stand.”

“This is pretty amazing. Is this an April fools joke? Or is Goldcorp’s CEO going to be standing out front with us, shaking hands and apologizing on May 20th [at Goldcorp’s AGM in Toronto]? I think you’re pulling my leg … . [THEN LATER] Too bad. But you should send it to Goldcorp. They might enjoy this and it may even plant the seed of social conscience in someone there. I will print it off and leave it in their corporate bathroom. This piece makes you do a double-take”

ONE PERSON WROTE: “I discussed your note with a few colleagues and friends and although we realize that it is good to have some fun, especially on April Fool’s day, we feel that it was not really appropriate for Rights Action to write and send around such a notice since its mandate deals with serious issues that affect people’s lives. That being said, though, I think it would be a good idea if people were to forward this note to Goldcorp and play the naive public and ask if this is really true. Maybe it could serve as a wake up call for them? Your thoughts?” OUR THOUGHTS: “Thanks for your comments. We are collecting them. Most are positive. Some confused. Some critical. The communiqué was more than a joke … the underlying point being that Canada as a country, as a whole (obviously not all Canadians), continues to support, promote and endorse the actions of our companies and investors, many of which, like Goldcorp, are contributing to and benefiting from harms and violations. So, in a twisted sense, who is making fun of what? Are we making fun of a serious situation or is Canada (as a whole) making fun of and benefiting from the harms and suffering of others? We do think it would be a good idea if people forwarded this note, or any information to Goldcorp (and the CPP, and the Cdn gov’t, and the media), to try and achieve some sort of wake up call. Thanks very much.”

ONE PERSON WROTE: “Wow. This is unbelievable. I had a very emotional reaction to this (ie. relief; restored faith in humanity, etc.). Until I got to the bottom regarding the April Fools greeting. Is this not for real?” ANOTHER RESPONDED: “Sorry J., … its not for real. But it does serve to remind us of why this work is so important. While the emotional realization experienced, as we become aware this is an April Fool’s prank, is so uncomfortable, it is worthwhile experiencing (I felt it too). Maybe one day this won’t be satire or sarcasm – and that is what we all aspire to. The fact that we each believed it for an instance or a moment underwrites our personal faith in the possibility of change. It also gives hope, strengthens our resolve and elicits dialogue amongst others engaged in the struggle – a process that is so important as working in isolation can lead to feeling overwhelmed and burning out. It was also a great summary of the way things could be if the demands of the affected communities and of Canadian activists who refuse to allow our government to support unethical and illegal international business interests.”

BOARD OF DIRECTORS:
To report complaints about Goldcorp’s accounting, internal accounting controls, auditing matters or other concerns to the Board of Directors or the Audit Committee, please select one of the following options:

TRANSFER AGENT:
For information on such matters as share transfers, dividend cheques, or a change of address, please contact: