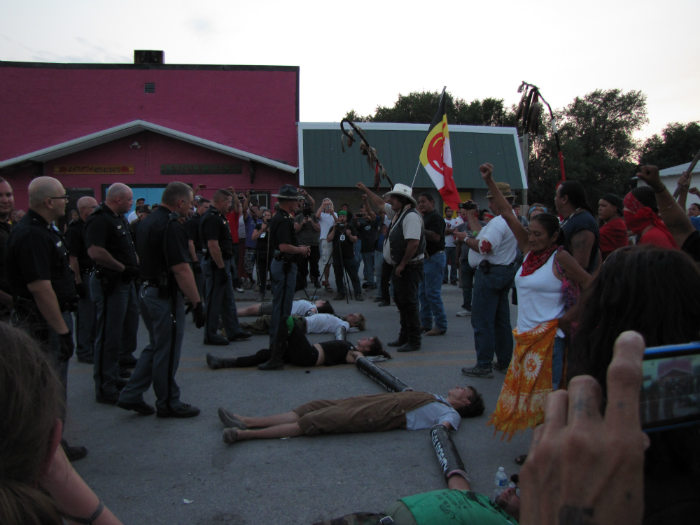 Protesters get arrested for standing up to predatory liquor stores in White Clay, Nebraska

On August 26, women of the Oglala Lakota Nation stood alongside allies to send a message to the predatory liquor vendors in White Clay, Nebraska.

It wasn’t long before the police came to rescue the blight of a town. White Clay only has a population of 14, yet it has 4 liquor stores and sells approx. 12,500 cans of beer each day. They sell those cans to anyone, be they bootleggers, intoxicated people or minors. They also trade beer for sexual favors. They need to be shut down.

Women of the Oglala Lakota nation along with activists from Deep Green Resistance, AIM Grassroots, Un-Occupy Albuquerque, Occupy Lincoln, and Rocky Mountain Peace and Justice Center took part in a march from Billy Mills Hall in Pine Ridge into White Clay to protest against the predatory liquor industry present there.

White Clay has a population of 14, yet 4 liquor stores in the town sell 12,500 cans of beer each day. The stores have been documented repeatedly selling to bootleggers, intoxicated people, minors, and trading beer for sexual favors.

“For over 100 years the women of the Oglala Lakota nation have been dealing with an attack on the mind body and spirit of their relatives”, says Olowan Martinez who is a main organizer of the event and resident of Pine Ridge. “The Oglala have been silenced through chemical warfare waged by the corporations who are out to exploit and make a profit off of the suffering and misery of our people. The time has come to end this suffering by any means necessary.”

Debra White Plume, a Lakota activist and resident of Pine Ridge who spoke at the event proclaimed, “A sober Indian is a dangerous Indian. We have to send a message to Nebraska and its citizens that we are not going to tolerate business as usual. This is the Women’s Day of Peace but that peace will soon be over”.

After the march and speeches members of Deep Green Resistance locked down and blockaded the road into White Clay.

Less than a half hour after the lockdown began a police officer rolled down their window and indiscriminately pepper sprayed into a crowd. Up to 12 people were pepper sprayed including the 10 year old son of a Lakota woman who helped organize the march. Also, an elder Lakota woman, Helen Red Feather, reported having her leg hit by a police car in motion. Medics with the protest treated pepper spray injuries.

At 7:39, the five activists who participated in the lock down were hauled off in a horse trailer to the Sheridan County jail in Rushville. They have since been released on their own recognizance.

Chants of “As long as it takes!” began by those locked down and the people standing with them in the crowd at the beginning of the lockdown. The struggle continues.