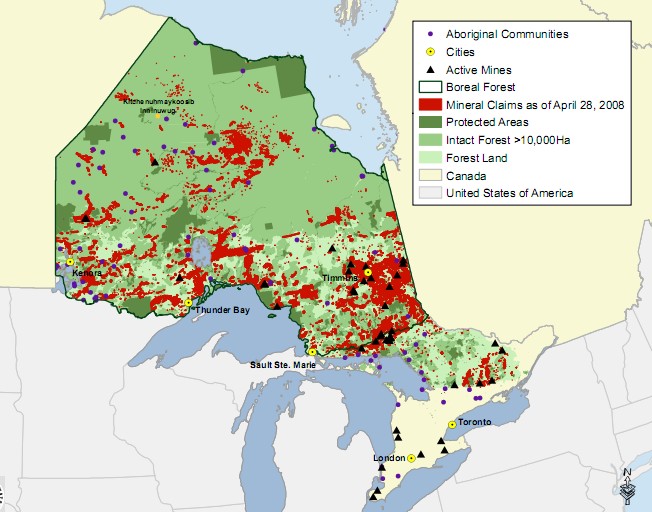 Consultation means nothing without consent

Three First Nation Band Councils released a joint statement last month in response to the newly proposed Ontario Mining Act, once again raising a critical issue that the Government of Ontario and the Supreme Court of Canada has repeatedly failed to recognize: The right to Say NO.

In effect, the absence of this right (the right of consent) in the Ontario Mining Act or any other piece of legislation in Canada is an allowance by the government to molest Indigenous People.

It is further allowance to molest Canadian citizens, some have realized, while others foolishly form their own “citizen militias” to challenge and threaten indigenous people because they themselves fail to grasp the meaning of the word —or anything substantial when it comes to Indigenous People in Canada.

As far as Indigenous rights are concerned, the Ardoch Algonquin First Nation, the Mushkegowuk Council, and Kitchenuhmaykoosib Inninuwug (KIFN) point out how the absence of that right makes the government’s admitted obligation to “consult and accommodate” them, meaningless—because they are left with no choice but to make every concession to the govenrment and to the mining companies no matter how destructive it will be to their land-base, their culture and their way of life.

In other words, without the right of consent—or, when that right is not granted to the govenrment and the mining company by the First Nation—-the process of “consultation and accommodation” is an assault on the First Nation.

What’s missing in Mining Act changes? The Right to Say NO

TORONTO – In response to proposed changes to Ontario’s Mining Act, Mushkegowuk Council, Kitchenuhmaykoosib Inninuwug and Ardoch Algonquin First Nation call on the province to respect the right of First Nations to say NO to all aspects of mining from prospecting to exploration to full mine development in their traditional territories. The First Nations clarify that the Ontario government must respect and adhere to Constitutional duty of consultation and accommodation and the internationally recognized right of free prior and informed consent. This has not been addressed by the proposed changes Minister Gravelle introduced on April 30, 2009.

“The Supreme Court of Canada has said that consultation and accommodation have to be meaningful. How can they be meaningful if we don’t have the right to say NO to mining that will impact our lives and culture?” says Grand Chief Stan Louttit of the Mushkegowuk Council. The Mushkegowuk Council is comprised of seven communities including Attawapiskat, Fort Albany, Kashechewan, Moose Cree, New Post, Chapleau Cree and Missanabie Cree. Their homelands cover a vast area in and around James Bay of the Boreal Forest.

Changes to the Act were prompted in part by ongoing conflicts between mineral exploration companies and First Nations that resulted in the incarceration of Bob Lovelace and KI Six last year. “These amendments will not resolve the KI Platinex conflict. Further conflict is all but inevitable,” says Sam McKay, Councillor and Spokesperson for Kitchenuhmaykoosib Inninuwug (KI). Mr. McKay was one of KI Six who spent 68 days in jail.

“The proposed changes to the Mining Act are smoke and mirrors,” says Mireille Lapointe, Co-Chief of the Ardoch Algonquin First Nation. “They are meant to placate and silence dissent. Consultation without the right to say NO is meaningless and a cynical exercise,” adds Chief Lapointe. Bob Lovelace of the Ardoch Algonquin First Nation spent 101 days in jail for saying NO to uranium exploration.