What if Natives Stop Subsidizing Canada? 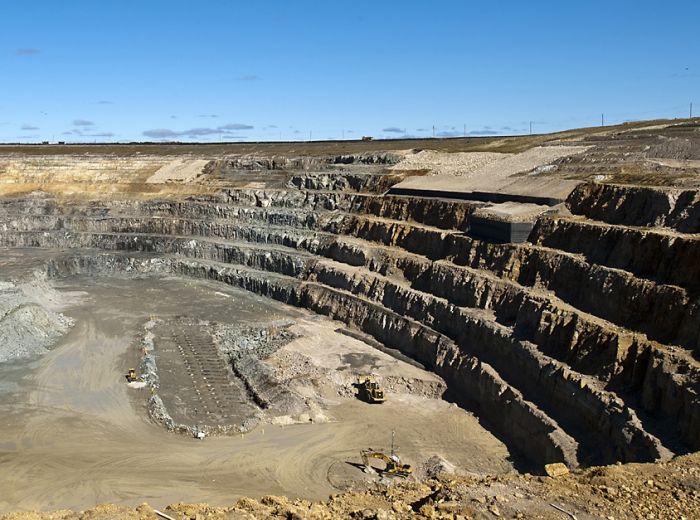 DeBeers’ open pit mine near Attawapiskat.

There is a prevailing myth that Canada’s more than 600 First Nations and native communities live off of money — subsidies — from the Canadian government. This myth, though it is loudly proclaimed and widely believed, is remarkable for its boldness; widely accessible, verifiable facts show that the opposite is true.

Indigenous people have been subsidizing Canada for a very long time.

Conservatives have leaked documents in an attempt to discredit chief Theresa Spence, currently on hunger strike in Ottawa. Reporters like Jeffrey Simpson and Christie Blatchford have ridiculed the demands of native leaders and the protest movement Idle No More. Their ridicule rests on this foundational untruth: that it is hard-earned tax dollars of Canadians that pays for housing, schools and health services in First Nations. The myth carries a host of racist assumptions on its back. It enables prominent voices like Simpson and Blatchford to liken protesters’ demands to “living in a dream palace” or “horse manure,” respectively.

It’s true that Canada’s federal government controls large portions of the cash flow First Nations depend on. Much of the money used by First Nations to provide services does come from the federal budget. But the accuracy of the myth ends there.

On the whole, the money that First Nations receive is a small fraction of the value of the resources, and the government revenue that comes out of their territories. Let’s look a few examples.

The Algonquins of Barriere Lake have a traditional territory that spans 10,000 square kilometres. For thousands of years, they have made continuous use of the land. They have never signed a treaty giving up their rights to the land. An estimated $100 million per year in revenues are extracted every year from their territory in the form of logging, hydroelectric dams, and recreational hunting and fishing.

And yet the community lives in third-world conditions. A diesel generator provides power, few jobs are available, and families live in dilapidated bungalows. These are not the lifestyles of a community with a $100 million economy in its back yard. In some cases, governments are willing to spend lavishly. They spared no expense, for example, sending 50 fully-equipped riot police from Montreal to break up a peaceful road blockade with tear gas and physical coercion.

Barriere Lake is subsidizing the logging industry, Canada, and Quebec.

The community isn’t asking for the subsidies to stop, just for some jobs and a say in how their traditional territories are used. They’ve been fighting for these demands for decades.

Attawapiskat has been in the news because their ongoing housing crisis came to the attention of the media in 2011 (MP Charlie Angus referred to the poverty-stricken community as “Haiti at 40 below”). More recently, Chief Theresa Spence has made headlines for her ongoing hunger strike. The community is near James Bay, in Ontario’s far north.

Right now, DeBeers is constructing a $1 billion mine on the traditional territory of the Ahtawapiskatowi ininiwak. Anticipated revenues will top $6.7 billion. Currently, the Conservative government is subjecting the budget of the Cree to extensive scrutiny. But the total amount transferred to the First Nation since 2006 — $90 million — is a little more than one percent of the anticipated mine revenues. As a percentage, that’s a little over half of Harper’s cut to GST.

Royalties from the mine do not go to the First Nation, but straight to the provincial government. The community has received some temporary jobs in the mine, and future generations will have to deal with the consequences of a giant open pit mine in their back yard.

The Lubicon Cree, who never signed a treaty ceding their land rights, have waged a decades-long campaign for land rights. During this time, over $14 billion in oil and gas has been removed from their traditional territory. During the same period, the community has gone without running water, endured divisive attacks from the government, and suffered the environmental consequences of unchecked extraction.

Sour gas flaring next to the community resulted in an epidemic of health problems, and stillborn babies. Moose and other animals fled the area, rendering the community’s previously self-sufficient lifestyle untenable overnight. In 2011, an oil pipeline burst, spilling 4.5 million litres of oil onto Lubicon territory. The Lubicon remain without a treaty, and the extraction continues.

The Lubicon Cree are subsidizing the oil and gas sector, Alberta and Canada.

What will Canada do without its subsidies?

From the days of beaver trapping to today’s aspirations of becoming an energy superpower, Canada’s economy has always been based on natural resources. With 90% of its settler population amassed along the southern border, exploitation of the land’s wealth almost always happens at the expense of the Indigenous population.

Canada’s economy could not have been build without massive subsidies: of land, resource wealth, and the incalculable cost of generations of suffering.

Overall numbers are difficult to pin down, but consider the following: Canadian governments received $9 billion in taxes and royalties in 2011 from mining companies, which is a tiny portion of overall mining profits; $3.8 billion came from exports of hydroelectricity alone in 2008, and 60 per cent of Canada’s electricity comes from hydroelectric dams; one estimate has tar sands extraction bringing in $1.2 trillion in royalties over 35 years; the forestry industry was worth $38.2 billion in 2006, and contributes billions in royalties and taxes.

These industries are mostly take place on an Indigenous nation’s traditional territory, laying waste to the land in the process, submerging, denuding, polluting and removing. The human costs are far greater; brutal tactics aimed at erasing native peoples’ identity and connection with the land have created human tragedies several generations deep and a legacy of fierce and principled resistance that continues today.

Canada has developed myriad mechanisms to keep the pressure on and the resources flowing. But policies of large-scale land theft and subordination of peoples are not disposed to half measures. From the active violence of residential schools to the targetted neglect of underfunded reserve schools, from RCMP and armed forces rifles to provincial police tear gas canisters, the extraction of these subsidies has always been treated like a game of Risk, but with real consequences.

Break the treaty, press the advantage, and don’t let a weaker player rebuild.

The last residential school was shut down in 1996. Canadians today would like to imagine themselves more humane than past generations, but few can name the Indigenous nations of this land or the treaties that allow Canada and Canadians to exist.

Understanding the subsidies native people give to Canada is just the beginning. Equally crucial is understanding the mechanisms by which the government forces native people to choose every day between living conditions out of a World Vision advertisement and hopelessness on one hand, and the pollution and social problems of short-term resource exploitation projects on the other.

Empathy and remorse are great reasons to act to dismantle this ugly system of expropriation. But an even better reason is that Indigenous nations present the best and only partners in taking care of our environment. Protecting our rivers, lakes, forests and oceans is best done by people with a multi-millenial relationship with the land.

As the people who live downstream and downwind, and who have an ongoing relationship to the land, Cree, Dene, Anishnabe, Inuit, Ojibway and other nations are among the best placed and most motivated to slow down and stop the industrial gigaprojects that are threatening all of our lives.

Movements like Idle No More give a population asleep at the wheel the chance to wake up and hear what native communities have been saying for hundreds of years: it’s time to withdraw our consent from this dead end regime, and chart a new course.

This article was originally published at the Media Coop