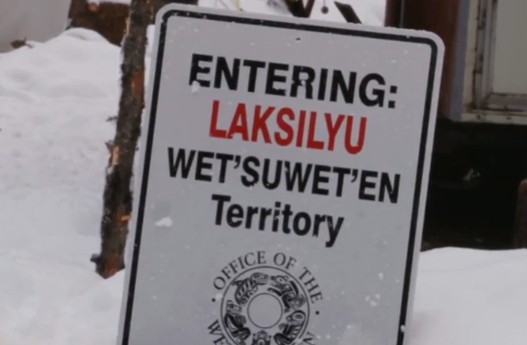 The Vancouver Media Co-op interviews Richard Sam, a member of the Wet’suwe’ten Nation and one of two people maintaining a road blockade against the Canadian logging company Canfor in central British Columbia

For nearly five months now, a Wet’suwe’ten family in central BC has maintained a road blockade within their House territory.

The Canadian logging company Canfor was granted rights to log in the territory by the Provincial government in August 2009. However, they did so without consulting or gaining the consent of the Wet’suwe’ten Nation.

Canfor began their logging effort soon after they were granted their new rights–putting in danger the last remaining portion of the Wet’suwe’ten’s territory that has not already been torn apart by logging.

The company regularly entered their territory for roughly three months; until, one day in mid-November, they were greeted with a family roadblock on Redtop road.

Canfor has not been able to re-enter the territory since then; but they have tried dozens of times, even returnining as often as once a day.

The Canadian company also filed for an injunction against the Wet’suwe’ten family for restricting access to their own territory. A counter injunction is being sought against the company.

This is all taking place in spite of the Province’s constitutional obligation to consult the Wet’suwe’ten Nation, as well as a 2001 agreement between the Wet’suwe’ten and the BC Ministry of Forests which states that no logging may take place in the concession area without prior consultation.

The next court date concerning the Wet’suwe’ten’s intact forest and Canfor’s (secondary) logging rights to it, is expected to take place in June 2010.

This film was Produced by Amy Miller & Rémy Huberdeau.