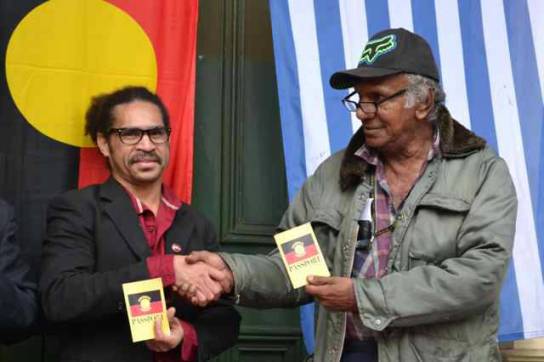 West Papua Freedom Flotilla – June 1, 2013 – A historical ceremony was held outside the Victorian Trades Hall on June 1 for the issuing of “Original Nations” passports and West Papuan visas in conjunction with the Freedom Flotilla from Lake Eyre to West Papua.

In solidarity with the passport ceremony in Melbourne, a peaceful rally was also held in Manokwari, West Papua.

The “freedom flotilla” convoy, which will travel through central and northern Australia and leave from Cairns, aims to highlight the abuse of human rights and land rights occurring in West Papua.

Indonesia invaded the western half of the island of New Guinea in May 1963. Since then over 500,000 West Papuan deaths and disappearances have been unaccounted for as a result of violence and poverty inflicted by the military occupation.

West Papuan leaders together with traditional owners of the Kulan, Gunnai and Arabunna Aboriginal nations, which once shared the same continent, have initiated this peaceful action to draw international attention to the situation in West Papua and take a stand against the Indonesian military and the governments and multinational corporations that are complicit in the crimes against humanity taking place there.

“For as long as these human rights abuses occur, the Australian and Indonesian government are complicit in genocide,” says Robert Thorpe, an elder of the Gunnai nation.

Jacob Rumbiak, the foreign minister of the Federated Republic of West Papuan government in exile said: “This mission will reunite our Indigenous family link, which was broken by geological evolution and colonial boundaries.”

Uncle Kevin Buzzacott, an elder of the Arabunna nation said: “This was one land; we still are one people, one soul.”

The Freedom Flotilla is being crowd-funded, and has received support from environmental and human rights activists, politicians, musicians, unions and West Papuans inside and outside West Papua.